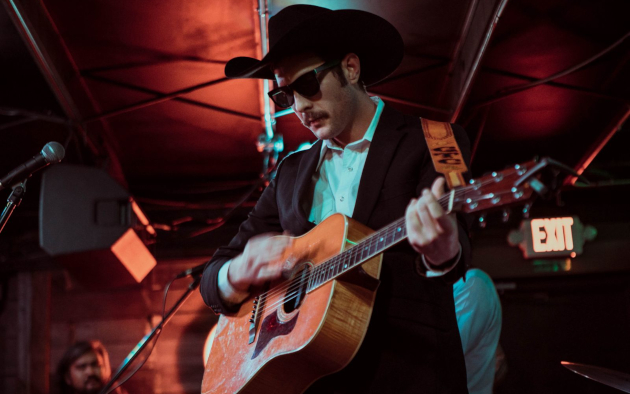 Garrett T. Capps is like a country artist without a country. Or more like a country artist without a planet. Space country is what he likes to call his music to attempt to convey the atmospheric and psychedelic flavoring of his brand of honky tonk. It’s a little bit out there, which means he doesn’t fit nice and snug into any specific niche of the country and Americana scene. That’s not to say he doesn’t have a home. In San Antonio, Garrett T. Capps is considered a honky tonk holdout and hero in a city where such characters are few and far between.

Sure, George Strait is often associated with the Alamo City, but more by proximity than close association. Steve Earle left a long time ago, and was always more alt than country. Meanwhile Garrett T. Capps has been doing what he can to establish a beachhead for old school country in San Antonio, helping to open the Lonesome Rose honky tonk on Mary St. last year that has since become the spot where a lot of the Austin honky tonkers play when they want to take the two hour trip south. Garrett T. Capps is San Antonio’s ambassador for all things twang and interplanetary travel.

Soliciting the services of producer Adam Odor—a.k.a. the secret ingredient behind the recent success of Mike and the Moonpies—as well as other notable regional talent that includes Jamie Lin Wilson and Carson McHone supplying harmony vocals, and the one and only Augie Myers who also is a son of San Antonio and was in a little thing called the Texas Tornadoes, Garrett T. Capps is destined to become much better known beyond the sphere of San Antonio if he continues to put out records like his latest, All Right, All Night. 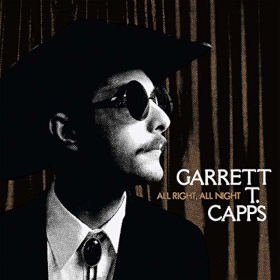 The 2nd installment in a three-part album trilogy, All Right, All Night is imaginative, interesting, stimulating, and unique, but none of this is to imply that it is too unusual for your average redneck, or not especially country, or that it takes a trip on mescaline to comprehend. On the contrary, the record feels like an aggressive work of Texas honky tonk music, from the bursts of steel guitar and fiddle, to the songs of fading love, heartache, fear, and loneliness.

The image and marketing can precede Garrett T. Capps a little bit, and throw you off the true scent of his music. The funny sunglasses and the talk of “NASA country,” it might make you a little leery to jump on board. We’ve been burned too many times by hipsters with steel guitars who put out that spectacular first record, only to reverse course in subsequent releases and say they were just screwing around in a short-lived country phase. Most hipsters refute that hipsters are even a thing. Garrett T. Capps embraced it, at least back when being a hipster was a thing, which is kind of a thing no more. Y Los Lonely Hipsters was the name of the record he released in 2016.

But don’t be scared off, Garrett T. Capps still is solidly country, and has proved his devotion to the music in more ways than one. The twangy guitar and fiddle of “Alone With You” gets you feeling alright, and the sad moments of “Lonely Heart” with Carson McHone sound like something Hank Williams would write and sing. It’s just that little bit of extra reverb on the vocal and guitar, and the space and expansiveness instilled in the music that give Garrett T. Capps that boost of character, making All Right, All Night more than just another trad. country record that drones on with the same three chords and tired themes.

Maybe he tries a little too hard at times to prove how different and unique he is as opposed to letting the music speak for itself. And sometimes he lets himself off the hook in his writing, doubling up on a word or phrase as opposed to delving deeper into a subject. Nonetheless, songwriting is just as much of a positive attribute to this Garrett T. Capps brand of country music as the sound itself, looking to expose the audience to new perspectives on life. Both these attributes come into play brilliantly in the 9-song album’s final offering, the expansive, “Brand New Dance,” offering the listener the opportunity to get lost in a moment and a mood that most 3-minute boot scooters just can’t achieve.

Expanding the boundaries of country music to the outer reaches of the Universe while still keeping it firmly tethered to its roots and origins is not an easy task, and one commonly fumbled by those who try. But being isolated in San Antonio away from the trend chasing of East Austin or East Nashville, and being just the right amount of weird, Garrett T. Capps is the man to get it done.