There was a time when we believed that the Garth Brooks comeback album would be the biggest event in country music all year, if not in the last half decade or longer. Now sales projections have the album struggling to reach 150K units sold in its debut week (though who knows how GhostTunes will account), while Garth’s comeback single “People Loving People” is a dud that has already been declared “done” at radio. Meanwhile he’s setting record attendance numbers all across the country as part of his comeback tour, but maybe the music became an afterthought, at least to consumers.

The truth is, Garth was never going to live up to the lofty expectations many were foisting upon his re-entry into the country fold. Forget the naysayers who still can’t get over his high wire act at Texas Stadium or the Chris Gaines gimmick, there was some thought that Garth may be the only one left with the star power to reignite the spark of true country music in the mainstream once again, however ironic this may be given Garth’s history. But in hindsight, this was sort of like thinking Mike Tyson could still be heavyweight champion in the early 00’s, or that Brett Favre could still win a Super Bowl. At some point our greatest talents leave us all, if they don’t become out-of-style even if they’re still present in full force. 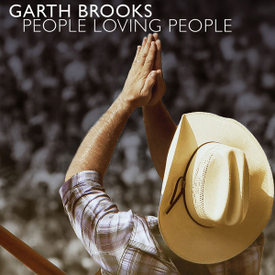 Choosing to go with “People Loving People” as a lead single may have been the greatest single mistake of Garth’s career. Chris Gaines, eat your heart out. As Saving Country Music asserted amidst the song’s release, it would probably turn out to be the least country song of the entire project, and hearing the full Man Against Machine album now, this is most certainly true. The song left the country fans hoping for a triumphant Garth return crestfallen, and the rest of listeners just a little perplexed, despite not being a particularly bad song on its own autonomous merit. This was Garth being Garth—wanting to change the world with a song instead of simply putting something out there radio would play and help ease him back into the mainstream picture. Truth be known, Garth’s entire rollout has been wonky, with decisions easy to second guess.

But Man Against Machine is not all doom and gloom here. To begin with, forget whatever first impressions “People Loving People” may have given you; Man Against Machine is country. It’s Garth country no doubt, with a little bit of the arena rock attitude that he first brought to country, and a little soulful blue-eyed R&B with a country flavor mixed in. Getting even more specific, there’s a straight up Western Swing song on the album, and quite a few more songs that solidly fit in the true country style. There’s some overly sappy moments, like the sentimental song “Mom” which once again is very Garth. There’s also many well-written songs. Will Man Against Machine help save country music? You certainly don’t get that sense. But there’s still some good music here, and not much bad.

The opening title track of Man Against Machine is a maze of messages that can be read a number of ways, while the music itself is very much a hard-rocking and punctuated expression. Many are surmising that this song is a shot at Music Row and the country music machine. Others feel it challenges the drum machines and Auto-Tune that pervade popular country music, or that it is specific to his well-publicized battle with iTunes. Still others think it’s target and message is more global, that it’s showing concern for how technology is impinging on our lives.

But the genius of the song “Man Against Machine” is that it’s message can mean all of these things, or something entirely different depending on the perspective of the listener. Though the music might seem a little off-putting, or even arrogant to some listeners, the simple fact is “Man Against Machine” might be the best-written song on the album—on an album of well-written songs. The duplicitous meanings, the allusions to the classic John Henry story in country, lines like “Careful calculations details drawn down to design. Is it really for the better or a better bottom line,” and even the self-awareness of “‘Cause I’m a machine myself, but I’m one with a working heart,” make for a delicious riddle to unwind, and an inspiring message if one chooses to take it as such. 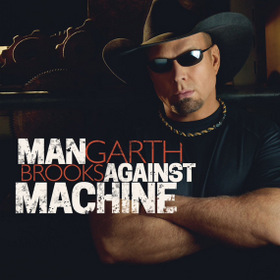 You can go back and forth about the objective or production of some of these songs, but the songwriting is somewhat hard to deny. Garth had his pick of the litter of material, and despite the lack of large singles on this album, the patience Garth exhibited vetting offerings, and the breath of the song selections, is impressive. The duet with wife Trisha Yearwood on a song Garth co-wrote called “She’s Tired of Boys” is quite striking, despite the schlock rock harmonized guitar lines and general adult contempo production. Again the production leaves something to be desired, but “Cold Like That” carries an advanced, almost esoteric message that challenges the listener—something refreshing and unusual from a mainstream country star.

“All American Kid,” “Wrong About You” and “Cowboys Forever” are just straight ahead solid contemporary country numbers that are hard to complain about, though they may not offer anything particularly new or exciting. The Western Swing “Rodeo and Juliet” is certainly the most surprising track on the album, and when I say “Western Swing,” I’m talking about Bob Wills at Cain’s Ballroom, and a smart, fun, and once again well-written song, and the 3rd of the album with a Garth co-write credit. Though there are multiple variances from the country theme on this album, there is also ample steel guitar, some fiddle, mandolin, dobro, and piano, and a list of respected musicians who appear in the liners such as Jerry Douglas and Bryan Sutton.

“Send ‘Em On Down The Road” is where Garth gets the recipe of sentimentality correct; something he measures out too syrupy on “Mom.” The song “Fish” once again features a fine songwriting performance, and a message that seems to ring deep for Garth and is lovingly delivered. Man Against Machine ends with a distinct R&B flavor, with “You Wreck Me” feeling like a stretch out of Garth’s style pocket, and potentially one of the album’s bids for radio play, but one that feels a little dated. Meanwhile the final track “Tacoma” is arguably the best vocal performance for Garth on the entire album. A challenging structure imagined by songwriters Caitlyn Smith and Bob DiPiero, Garth does a superb job re-imaging the song in his own image while capturing the compelling original sentiment.

The change in Garth’s voice may be the greatest takeaway of Man Against Machine. Where classic Garth was able to dip down into the lower registers and then drawl back up with such a meaty tone on all those early 90’s standards, today’s Garth is an animal of the middle register with a much more rigid range, making his voice more ordinary, despite his control and ability to emote passion certainly still being present.

Man Against Machine is a strong performance from a mainstream artist coming off a 12 year hiatus, but you don’t hear the song that could be the commercial blockbuster or game changer that this album would need to put itself in front of the wider consciousness. They will find some singles on this album that country radio in 2014-2015 is more receptive to, while country’s impending format split might also aid Garth’s return. But radio may be salivating more for a new single if the first one had been better received. Now they may be more suspicious.

The purists will pan it because it’s Garth, and the mainstream may mostly ignore it because Garth is such an unknown quantity to their youthful demo. And everyone will question the wisdom of releasing “People Loving People” as a single or the somewhat silly cover art. But Man Against Machine is a solid Garth record, with some sappy moments, some rock and R&B moments, but mostly just good contemporary Garth country worthy of at least an open-minded listen.

Man Against Machine is Available Digitally through GhostTunes

Purchase Man Against Machine from Amazon