I firmly believe that one of the problems with modern music is that there’s too much of it. So to see an artist, especially one as influential, critically-acclaimed, and well-received by the public as Gillian Welch wait 7 years to put out an album, is refreshing, and wise. Quality over quantity people.

But time and patience don’t guarantee a good album. What does is excellent songwriting, and that is exactly what Gillian delivers in The Harrow & The Harvest. Superbly-crafted, dark, sometimes even disturbing songs employ subtlety and wit so well, it rockets the songcraft on this album to the top of the 2011 class, and makes The Harrow well worth the wait. 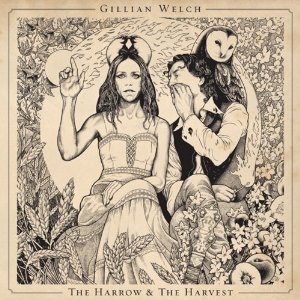 From a songwriting standpoint, there is not a weak track on this album. Each song conveys an underlying theme, message, or lesson, or all three, and like all great songwriting, affords brilliant perspective on life.

The difficulty of this album that some, maybe many people will find will be the sparse nature of the music. This is mood music, not music for every mood. The album features David Rawlings on guitar, and not much else; some banjo and harmonica on “Six White Horses” and banjo again on “Hard Times”. The inability of this album to separate the individual songs through production, or separate them from Gillian’s body of work in total might bring some to want more from this album, or even find it boring. I would caution though that this album is meant to be listened to, not heard. No, there’s not a lot of booty shaking to go along with The Harrow & The Harvest, but there’s no intention in this album to effect that response either. The intention is to capture the heart of the song as it was envisioned by Gillian, and though a few more subtle layers of production might have helped this album, drums or a more electric approach might have buried the song’s greatest attribute, which is the words themselves.

And for people who want more meat or body from this music, don’t overlook this element in the lyrics. The music may be liliting, but there’s a lot of anger, soul, torment, and blood in the words and stories. Gillian builds a song out from a torment or innate human frailty like a rock band may build a song from an angry guitar riff. Something else worth noting is that Gillian doesn’t over-sing, like many of the up-and-coming women who fit in this “Americana” genre that Gillian helped forge.

This album is one of those that needs multiple listens before you can fully appreciate it, but once it sticks to your bones, not listening to it enough will not be an issue, because you might need a pry bar to get it out of your player.

Purchase & Preview Tracks of The Harrow & The Harvest