(Click here for review of Ghost to a Ghost)

Ever since Hank Williams III released his groundbreaking double album Straight to Hell in 2006, he’s been chasing expectations. The followup Damn Right, Rebel Proud I’ve always asserted had some of the best songs he’d ever written, but the project got bogged down in production issues, a fact Hank3 admits himself. The next offering Rebel Within got the production kinks ironed out and had its moments, but began to expose Hank3’s lack of creativity in a Curb Records-controlled environment.

The first record in the 4 record salvo from Hank3 Ghost to a Ghost felt very much like business as usual in the post-Straight to Hell era. But Guttertown is where Hank3 gets it right by doing the same thing he did in the early and mid oughts, following his heart, defying any expectations for sound and genre, and letting his creative passion flow. Simply put, this is the best album Hank3’s put out since his 2006 opus, if not the best album he has put out ever, and possibly one of the best albums 2011 has seen so far.

Some will criticize that there’s not much country here, but that’s because great music transcends genre. Hank3 has warned his fans not to expect a lot of straightforward country from his double album, of which Guttertown constitutes the #2 platter. I think this warning is mostly for the more metal-oriented material on the first disc Ghost to a Ghost. If Hank3 thinks the heavily Cajun-influenced material, or even the ambient, transcendental music on Guttertown isn’t country, I would agree that it is not country in a traditional sense, but it is country from a lack of anything else to call it. 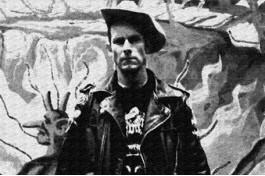 Tom Waits, a man who has created a storied career out of defying genre, while still pulling elements and influences from all over, appears on this album and is clearly a Hank3 fan. Though we think of early Hank III as a neo-traditionalist, and later Hank III as a fusion of country and metal, his true calling might be this genre-defying approach. In the opinion of this bear, it has worked twice, and constitutes the heart of his best material.

The approach to Guttertown is similar to disc #2 of Straight to Hell, though I caution of thinking of it as the same. Yes, it takes the idea of interlacing songs with ambient-based interludes and compositions, but Guttertown has such a better sense of timing and balance, and tracking out the individual offerings as opposed to laying out one big chunk creates more accessibility. Instead of songs and interludes, there is an inter-relationship between the two, making for better songs, and better interludes, and a better album.

The first thing that struck me about this album was Hank3’s patience, and his spectacular sense of timing. This is evident in two of the first three songs, “Goin’ to Guttertown” and “The Dirt Road”. For tracks of spoken words over ambient sounds to work, there still must be a pentameter set for them to work autonomously, and do more than just to carry along a storyline. These aren’t just simple interludes, they are some of the strongest tracks on the album.

The second and fourth songs “Gutterstomp” and “Mu Sha” are where Hank3 brings the Cajun influences out in earnest. I would caution trying to judge the Cajun-influenced songs on their merit as traditional Cajun songs; they are not meant to be taken this way. Think of it like the bluegrass songs on O Brother Where Art Thou. They are meant to be primers, influenced by the sub-genre, not serious offerings as solid Cajun music. But these songs, along with “Dyin’ Day”, “I’ll Be Gone”, and the Waits’ duet “Fadin’ Moon” are solid nonetheless, with “Fadin’ Moon” possibly the best track on the album. 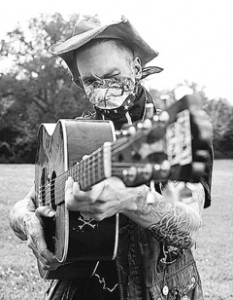 Songs like “I Promised”, “Move Them Songs”, and “Trooper’s Chaos” would have been exposed without the help of creative interludes and a rolling storyline, like similar songs on Ghost to a Ghost. Here though, they fit into the mood perfectly. The standout track for me was “The Lowline”, which again showcased the amazing sense of timing that Hank3 brought to this project, as well as good songwriting, and solid singing.

My concerns for this album are few. One is that the Cajun-influenced songs are all consistently a little too long. Since these songs take a simple approach to lyric and structure, drawing them out for 5, sometimes 6 minutes tends to expose them a little. I also thought Hank3 could pay a little more attention to the percussion in these songs. He seemed to favor the convenience of traditional drumset toms instead of the more appropriate hand drums, or even washboard, spoons, etc. The drums at times come across as dry or canned. And I appreciate the effort of the song “With The Ship”, I just don’t know if in the end it works. He was wise to put it at the end.

Something else worth noting is that there is no punk or heavy metal influences present on this album. None. Some may listen to it, take away from it that it is weird, and just assume this is Hank3 and his weirdo heavy metal bent, but those elements don’t exist here. Neither does any seriously heavy language (cussing, drug use, etc.). And once again, just like with all great albums, and underlying theme and storyline elevate the individual songs where they value greater than the sum of their parts.

I love this album. Is is country? I don’t know, I think you can make the argument that it is. And even if you want to make the argument it isn’t, will you preclude yourself from enjoying good music because of preconceived notions of what you like? Country or not country, good or bad, this is Hank3 being himself. And whenever you have a project where this is the overriding goal, it will always be better than the project that is not.

With Guttertown, Hank3 has once again establishes himself as a leader in music. It’s a brilliant display of what can happen when raw creativity and patient execution go hand in hand.

Order Ghost to a Ghost Directly from Hank3

Ghost to a Ghost / Guttertown on Amazon for only $8.99