2011 has seen the rise of more entities and organizations to support music in the greater underground roots/country movement than possibly all the other years combined. One of those entities has been Reverend Nix’s Cracker Swamp Productions out of Orland, FL, which in the spirit of full disclosure, broadcasts a podcast from this very site through SCM LIVE on a weekly basis.

With a servants heart, Rev. Nix buries his nose deep into the murky recesses of music that many of us dare not to go, with a tireless drive to find the audio gold just waiting to be discovered. It was in this pursuit that he unearthed Lone Wolf early this year, a previously-unknown banjo-playing one man band whose first album was Cracker Swamp’s freshmen release and featured one of the freshest approaches to banjo music in years, and still holds up after 6 months as one of the standout albums of all 2011. 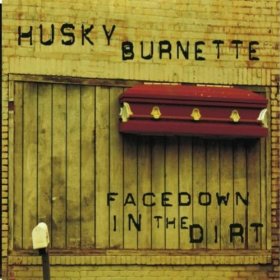 With Husky Burnette, it is a little less about discovery, and more about making sure an excellent album doesn’t fall through the cracks. Husky is a wily veteran of the underground roots circuits where country and blues intertwine with no prejudice, playing lead guitar for Roger Alan Wade for 2 1/2 years, and doing time with Polecat Boogie Revival who opened for Hank3. Zach Shedd, Hank3’s current bass player, plays bass on a couple of tracks for this album that is by far more blues than country.

Very few albums pass under my nose that I can’t find at least something wrong with, yet I can’t bring forth any gripe about Facedown in the Dirt. It’s not that the music is hugely groundbreaking, it simply is consistent and solid throughout, which is exceptional in its own right in this day of homespun, impatient projects cluttering the landscape.

Husky plays an electric, Mississippi Delta-style version of the blues, but what makes it so unique is his ability to straddle lines without crossing them. His voice has a hard grit and growl to it, but he doesn’t scream or sacrifice melody. His guitar tone is crunchy, but not so much that you would mistake this for metal. And the groove is the glue that binds Husky’s great taste for tone with his top notch songwriting, which works in traditional blues themes. Husky’s drummer Tony “Tonky Ponk” Jones also deserves props. His name might not be on the cover, but he is half responsible for the infectiousness of Husky’s grooves as the heartbeat of this blues tandem.

This is music to get you moving. I can’t listen to this album at home. I’ll get flying around and break things. I can only listen while driving, with a foot pumping on the gas pedal to the groove. If somebody was listening to this album and wasn’t at least bobbing their head or tapping their foot, the next thing I’d do is put a mirror in front if their mouth.

This is one of those albums that when someone first tells you they’re all originals, your gut instinct is to call bullsh. The songs are just too good, and too steeped in the authentic blues modes. But the liner notes don’t lie. They’re all Husky’s. And if you have any good sense, you should make them yours.

Purchase Facedown in The Dirt Directly from Husky Burnette

Preview and Purchase Tracks from Amazon

Husky playing a suitcase with a hollow bone at Muddy Roots. Jay from the Ten Foot Polecats on Harmonica.