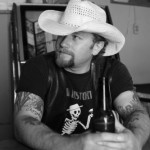 There may be no artist people have requested more I review over the years than Jackson Taylor & The Sinners. But when I finally got around to opening a line of communication with the band I was told I would have to wait even longer; they had something special coming down the pike. Jackson Taylor had just jettisoned his management and stripped his band down to a 3 piece, and had something new and wild in store. That new, wild something turned out to be Bad Juju.

This fiery, unfettered, full tilt assault on country music strikes that perfect chord of being both inescapably familiar yet remarkably fresh. Johnny Cash on cocaine may be the most appropriate description. More Memphis than Nashville, more madness than melancholy. But moreover, Bad Juju is just one hell of a good time.

This is fun music in the truest sense of the term. You don’t conjure up Bad Juju to commiserate with your pain, you conjure it up to forget about it. Jackson Taylor & The Sinners found their mojo by stripping it back to the simplest of lineups: Acoustic guitar and vocals, lead guitar, and drums. And when they found that mojo, they stuck with it, refined it, worked at it until it was perfect and its power both undeniable and universal on the human body.

The reason this album is so enjoyable is because the enjoyment Jackson Taylor & The Sinners have playing this music is so obvious and infectious. They recorded this album live in all of three short days, no overdubs, no over-thinking, boom! This is what you get, just what you’ll see live, no apologies, no over-production, just the raw Juju in your face and unapologetic.

And when they realized what magic they had found, they couldn’t help but give this stripped down treatment to other people’s songs. Frequent readers of Saving Country Music may know I care little for cover songs, especially familiar cover songs, and how much more familiar can you get than Elvis’s “That’s Alright Mama” or Johnny Cash’s “Stripes”? But where The Sinners’ sin is forgiven is in the amazing, energetic, and fun treatment they give these songs, and how they intermingle them with their originals with energy and attitude to their approach.

With such a stripped down lineup, dynamics were the key to making these song arrangements shine. Take Willie Nelson’s “It’s Not Supposed To Be That Way”. The sinners on this song go from barely even playing, to blazing out this sweet ballad like its hair was on fire. The dynamics they employ and the way each player is able to work in such unison with the feel of the song and each other is what makes this album something special. 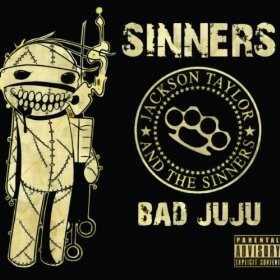 Austin “Slate” Garret’s amazing guitar work is like the nose tackle in a 3/4 football defense charged with filling a tremendous gap in such a small lineup. He pulls it off brilliantly without overplaying or relying on tricks or effects. Jackson Taylor’s voice can go from screaming to sweet in a heartbeat, and gets your heart beating by the emotions he brings out in these songs. Brandon Burke may have the hardest task of all, keeping up with these two monsters and holding together compositions that sometimes go from genteel to explosive in a single phrase.

My concerns about this album are few. Could they put out half a dozen albums with this lineup and the approach hold up? Probably not. That’s what’s so great about this album though, it is absolutely perfect for this time in music, with this band, with these songs, right now. The whole Memphis/Cash thing continues to be hot, yet at the same time Jackson Taylor is able to clearly delineate himself from the herd with this approach and attitude.

Ideally I would want to see more depth from the songwriting. Amongst originals like “Cocaine”, “Whiskey”, “Humboldt County Grown”, there’s not many songs that speak deep to the cerebral cortex. But in the context of this approach, mushy crap would just be in the way, dragging down this album. Jackson Taylor and the Sinners get a pass from being branded with the “Whiskey, Devil, Cocaine” parody tag by simply having so much fun with this album. They never take themselves too seriously. In fact there’s some dialogue embedded in this album (I won’t give away the punch line) that as gratuitous and immature as it is, shows the light side and ribald sense of humor this music is approached with.

The last little nit pick is the lack of low end here without a bass guitar. It comes across as a little difficult on the ear, especially at first because you’re used to the bass notes being there in this style of music. Along those same lines, long-time fans of Jackson Taylor will notice that despite 7 of the 10 songs being originals, some of the songs have been previously released. So if you’re familiar with these songs, it may cause old version/new version conflict in your music brain. But in the end, no concerns I had for this album were able to mitigate any of its strengths.

Please understand, this is not a family album (despite what Jackson Taylor may say jokingly on one of the tracks), this is for mommy and daddy time, for the hellraisers and hellbillies out there. But the balls out approach is something everyone will find infectious, and just plain fun.