In the natural world they’re referred to as apex predators and alpha males. They’re the ones that rule the roost and crest the food chain. They’re the specimens of natural design that exhibit the ideal mix of physical abilities and/or  favorable disposition to become the creatures all others are measured by.

It may be true that a good 90% to 95% of Americans wouldn’t recognize the name “Jason Isbell” if they were asked at random. That’s just one of the trappings of being an independent music artist . . . not necessarily a commentary on Isbell’s abilities or impact. But in the Americana phylum, and in 2015, Jason Isbell is the first suggestion one would have to offer if asked to give an example of the discipline. Jason Isbell would be the person pointed to when asked for an illustration of premier songwriting. Jason Isbell would be the name to give as an example of how country music could improve or “evolve” in the mainstream. And Jason Isbell would have to be person named as the one that rules the roost and is the measuring stick for sizing up his contemporaries, whether he relishes or even accepts that role or not.

Jason Isbell is the big dog, and you better pay attention when he releases an album, whether your wool is dyed in Americana colors, or you’re a country, folk, or rock fan peering into the Americana world from the outside in.

Anticipation is not always an artist’s best friend. The problem with releasing a career album that is showered with critical acclaim is where to go next. You try the same thing again and the audience may feel it’s a flat effort. You veer to far out-of-bounds and you risk losing your direction and the momentum behind it. Isbell’s last record Southeastern is still racking up plaudits in certain sectors, and here he is trying to get you to pay attention to a new one. 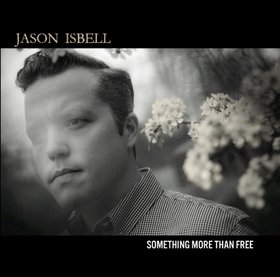 In the end that’s where the confidence of an artist must come in—to trust the direction of their methodology, and also be able to challenge themselves to match or exceed their previous output, even if this is accomplished by shoving all concerns of people’s conceptions and expectations aside, including the artists’ own. Nothing has materially changed in the Jason Isbell approach. Dave Cobb is still the producer. Isbell is still residing in the sobriety era of his adult life. Songwriter and fiddle player Amanda Shires is still the love interest. But possibly challenging Isbell’s material pool is the fading away of the memories of unhealthier times riddled with heartache that have been the thematic calling card with previous efforts.

But this concern in so many circumstances is the crutch that fails so many songwriters when they are faced with trying to match previous success. The world believes a soul must suffer mightily to give birth to a good song, and to have a song ring with authenticity. But the great songwriters who’ve been able to sustain noteworthy careers through significant life events, sobriety, stylistic changes in themselves and in music at large, are the ones who can pick up on universally-resonant themes and communicate them in a way that mesmerizes with its simplicity. Everything else is simply a distraction to someone with an open line of communication with themselves.

Something More Than Free is not going to reach out and grab you by the scruff of the neck musically or lyrically like moments in Southeastern did. There’s not the roaring guitars of “Stockholm,” or the heart wrenching story line of “Elephant” with its strategically-placed ‘F’ bomb. This one might task the audience to listen a bit more intently. It may be slightly more subtle in its approach, and stylized in its textures. But none of these observations are knocks or commentary on the quality of the effort. This is still the output of an apex Americana presence, and Something More Than Free overall might be the best representation of Isbell’s talents yet. It may just be advantageous to lure your mainstream-listening friends into the Isbell fold by playing more choice cuts from previous efforts before their acclimated and ready for the magic of Something More Than Free. Meanwhile listeners who need no such introduction will find the songwriting and approach of these new songs possibly more potent than ever.

Country music insurgents love to claim Jason Isbell as one of their own to co-opt the quality he delivers, even though a more honest categorization would put him firmly in the roots rock realm. But the first song from Something More Than Free called “If It Takes A Lifetime” shows how the roots of country are still most certainly present in the Isbell sound. Meanwhile “Life You Chose” relies on a hook and melody like a folk pop song, and the spatial and elongated “Children of Children” shows Isbell can present an idea, and then allow the music to tell the rest of the story. It is one of a number of more personal moments on this record, like the final song “To a Band That I Loved” that could be about the Drive-By Truckers he was once a member of, the bass player of the band he used to be married to, or something entirely different.

The center of the album—“The Life You Chose,” “Something More Than Free,” and “Speed Trap Town”—comprise the thematic heart of Something More Than Free as they explore the nature of fate and circumstance; how some struggle to control their destiny, others are overcome by it, and still others arrest control of their own fate. Enveloped in this exploration is the message to find the strength to forge your own path instead of falling prey to ulterior forces and living with regret. But of course the key is that Isbell never says this directly, for then the message would be lost.

Ultimately, writing a review for an album like this is pointless. If you fancy yourself a music fan, whether specialized to the Americana, country, rock, or folk realms, you probably already have an opinion on Jason Isbell, and you are going to want to be listening to this album and give it attentive consideration. Because it is the work of Jason Isbell, and it’s the one all others will be measured by.

Purchase Something More Than Free from Jason Isbell

Purchase Something More Than Free on Amazon