You certainly can find better bluegrass albums released in 2016, but it might be hard to find one more remarkable or historically significant. For generations now, the true devotees of the Grateful Dead have known that Jerry Garcia’s passion for bluegrass, old time, and country music was much more than some simple lark or a passing era in the legendary jam band’s lineage. If anything, Garcia’s foray into psychedelia, where he was so immersed and seminal to that sound he was crowned Captain Trips, was the detour.

Otherwise Garcia’s career was bookended and bisected with serious specimens of country and bluegrass passion that were much more constructive for spreading the kernel of love for country and roots on the West Coast than the simple side projects of a rock guy. Jerry Garcia was for real, and even though it’s nascent and maybe even a little bit amateur in spots, this very early recording of one of America’s most iconic music artists shows his study and passion for bluegrass and roots was well beyond skin deep.

The year was 1962. This is really important to dwell upon at least for a minute to allow the significance of this collection of songs to take shape in your mind. This was the year before Beatlemania took hold. This was two years before Bakersfield’s Merle Haggard would have his first major hit. This was three years before the earliest formation of the Grateful Dead. This was four years before Frank Zappa’s Freak Out! or The Beach Boys’ Pet Sounds. And this was six years before Gram Parsons joined The Byrds. This is also a year before Jerry Garcia could legally drink alcohol. 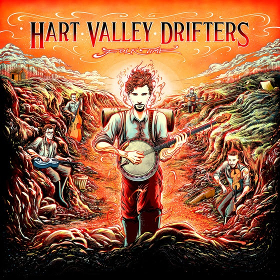 Like many of California’s psychedelic bands in the late 60’s and early 70’s, Jerry Garcia and the Grateful Dead would transition from trippy music to the twang of country in some of the group’s most lasting albums like Workingman’s Dead and American Beauty. But way before going country and bluegrass was trendy for bands on the West Coast, Jerry Garcia was an adept banjo and guitar player in the bluegrass style, and a studious practitioner of old time music, covering songs by Carter and Ralph Stanley, Dock Boggs, and Earl Scruggs.

1962 is also remarkable when you consider the quality of these recordings. The 17 traditional songs and covers performed on Folk Time were not necessarily meant to be compiled into a record. They were 42 minutes of live performances from Standford University’s KZSU college radio studio in 1962. But due to the historical significance and the immaculate quality of the recordings, ATO Records decided to construct them into now what is Jerry Garcia’s last release comprised of his first ever recordings.

Folk Time is an album from Jerry Garcia’s Hart Valley Drifters—a local project also featuring Robert Hunter, who would go on to be one of the Dead’s long-time lyricists, David Nelson of New Riders of the Purple Sage, as well as fiddler Ken Frankel, and dobro player Norm Van Maastricht. It includes solid renditions of traditional songs such as “Roving Gambler” and “Nine Pound Hammer,” more contemporary bluegrass of the time like Earl Scruggs’ “Ground Speed” released in 1961, and the old country standard “Sitting On Top of the World,” which bridges this session with the very first Grateful Dead record from 1967 that also features the Walter Vinson and Lonnie Carter composition.

You’re immediately amazed not just at the quality of the recording, but the craftsmanship of Jerry Garcia and his compadres. Yes, Folk Time does include some mistakes and sour notes. After all, this was not supposed to be a proper release, but was simply a performance captured live at a small transmitter college radio station. Nonetheless, the banjo is blazing in the Earl Scruggs style, the acoustic guitar work is spot on, and the harmonies exemplify not just effort and study, but heart.

20-year-old kids from San Francisco were not supposed to be this serious about American music from Appalachia. But Jerry Garcia certainly was, and it would go on to inform his entire anthology, not just through the Grateful Dead’s more country-oriented material or Jerry’s side projects like Old and In The Way, but even in the stories and vocabulary of his psychedelic, fusion jazz, and soul and reggae-influenced music. Listening to Folk Time, you get a sense that Jerry Garcia was always a roots musician whose passion for music just couldn’t be contained to one discipline.

Today with the surplus of prodigies in the bluegrass world and renown music schools like Berklee churning out virtual maestros at an incredible pace, it’s almost easy to lose sight at the daunting amount of proficiency and discipline the bluegrass art demands of its devotees. And for Jerry Garcia and friends to present this music effort at such a young age and in such an unsuspecting place shows the a level of love for American roots music virtually unparalleled for its place and time.