Well I can tell you this. No matter what you were expecting from this album, you’re probably going to be surprised.

I’ve never thought of Joe Buck as one to pay too much attention to the artistry of the recorded format. His discography consists mostly of slapped together CDRs with little psychotic scribbles for cover drawings, all home recorded, many with multiple versions of the same songs. I’m not complaining. They’re cool in their own right, like little pieces of evil folk art that contain more meaning than a mass produced glass-mastered silver disc in a plastic jewel case ever could. But it would be a stretch to say that a lot of refinement went into them. Joe Buck is a live performer.

Then about two years ago he released Piss & Vinegar, a proper studio album produced by Jack Endino (Nirvana’s Bleach) reportedly to be put out with heavy metal label Century Media before that deal went south. It included the prime cuts of Joe Buck’s previous albums done in a proper studio. For some of Buck’s core fans who’d been used to hearing the rough versions for so many years and watching him morph into a one man monster live, Piss & Vinegar felt somewhat tame. But Piss & Vinegar wasn’t for them necessarily, it was to reach folks who’d never heard Joe Buck before, to create a high-quality archive of his songs.

Joe Buck’s song craft has always been under-appreciated. People pick up on the primal experience of his show and many times miss the wisdom in his music. He once told me he could write songs for Taylor Swift (after telling me also that he “gets her”), and with one of his signature songs “Bitter Is The Day”, Joe Buck has given us a glimpse of what he’s capable of. 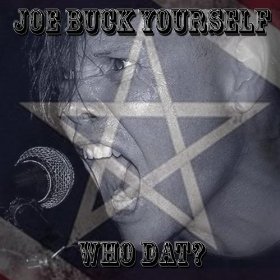 Who Dat is a completely different direction for Joe Buck, while still being exactly what he’s always done. That’s the root genius of it. Yes, without question this album is a lot more tame, more tame than even Piss & Vinegar. But what this approach does is bring out the roar of quiet anger. In many ways, even though this album features much less distortion and more singing than shouting or screaming, it’s even harder, even more disillusioned and unbalanced as a byproduct of it’s muted approach. Joe Buck’s anger isn’t as obvious, it is seething beneath the surface, boiling and permeating these recordings with an unsettled feeling, like a pressure tank ready to burst.

Just as with all of his albums, Joe Buck plays everything: guitar, drums, and bass. The instrumentation on Who Dat is more fleshed out than on most Joe Buck works, with good separation and engineering in the recording by Twin Oak’s Jason Dietz. Joe Buck plays his leads on an acoustic, again keeping you on that creepy edge from the understated approach. The words are more clear, making the conveyance of Joe Buck’s madness more coherent, while in places his writing leaves the messages a little more veiled.

Joe Buck’s song craft works in a circular pattern, spiraling into a moral about the descent of mankind that some may misunderstand as iniquitous or anti-religious. In truth it is the opposite. It is the Dante approach as apposed to the Gospel approach to pointing out the wayward trajectory of man. The acoustic-only “Jesus Is Dead” may be the best example of this, and one of the best Who Dat songs from an instrumental standpoint. In spots Who Dat is very personal, like the sweet and straightforward “Tied at the Hip” about Joe Buck and his wife. At other times it’s playful in a wicked way, like in the “Tango of Death”.

I don’t want to say Joe Buck has reinvented himself. I’m sure the stage show will be very similar to what we’ve seen from him in the past. And those who are familiar with Joe Buck’s work with Captain Sean from Throwrag may warm up quicker to this more subtle Joe Buck approach, that at times sways towards that Capt. Sean lounge-like feel.

What Joe Buck does with Who Dat is keep his music fresh. So many of his signature songs have been played for so many years with the same exact arrangement because they work so well. Now he has a new crop of excellent songs to work in as core standards, as well as a new approach to older songs if he wishes. This isn’t Joe Buck growing old with his music, it’s Joe illustrating tremendous self-awareness for a now almost 50-year-old performer; to be able to pull back, evaluate, and evolve to something new that at the same time is exactly what he’s always done.

Joe Buck will always be misunderstood by the masses. But when you look at the greater music world, his contributions are stout. To having a significant role in the #1 and #3 albums on SCM’s Greatest Underground Country Albums of All Time, to when you watch the new TV show “Nashville” on ABC and see Layla’s Bluegrass Inn featured—a place that Joe Buck bought back when lower Broadway in Nashville was virtually abandoned and help bring up along with that whole part of town–it’s plain to see that the music world would be a lot more plain if it wasn’t for Joe Buck’s musical madness.

Who Dat is only available on MP3 format and at Joe Buck live shows.

Preview & Purchase Tracks from Who Dat?