For those tragic songphiles who were done with popular music by late adolescence, started rummaging through their parents’ record collections and taking suggestions from older siblings and cousins about what was cool, and seem to be engaged in a lifelong pursuit of the essence of the listening experience—this is the manna, this is the potent stuff that still makes you feel like a listening virgin when you’ve built up such an insatiable tolerance and addiction over the years so that only the purest stuff will puncture you with its raw emotion.

Let’s face it, John Moreland is no matinÃ©e idol. He’s not going to make it as an American heartthrob selling out arenas. He’s a working man’s anti-star, dripping in real-ness and delivering songs that it’s easy to see are direct testaments of his life’s experiences set to pentameter and music. Mercilessly, Moreland pours his heartbreak and vulnerability out to his audience with no respite, no wiggle room, no upbeat tunes to clean the palette, no silly songs to calm the senses. Moreland sets out to break you down with one expedition into the innermost bouts of sorrow after another, and succeeds.

Moreland’s In The Throes from 2013 could be considered his breakout album, and it went on to crown or be included in many critics’ lists of the best songwriting efforts that year. It garnered the appreciation of songwriters like Jason Isbell who took Moreland out on tour, and grabbed the attention of Thirty Tigers who released this latest effort. Once a punk musician from Tulsa, he’s now regarded as a preeminent songwriter by many of his peers and loyal listening parishioners. 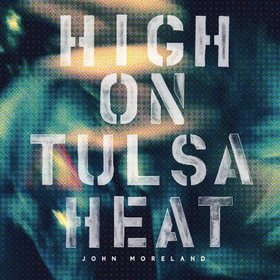 High On Tulsa Heat picks up right where In The Throes leaves off, with sparse and lo-fi arrangements that emphasize the songwriting and the mood Moreland looks to cast them in. Simple percussion and rhythm guitar is all the adornment deemed necessary to some tracks, while others are solely Moreland and his guitar solo, allowing the poetry to become the center of attention. And why not with lines like “Babe I know, this world will have the wolves outside your door, make you leave all you love to fight a war, and never tell you what you’re dying for,” or imagery conjured simply by the title of the song “American Flags in Black and White.”

But the same issue that faced In The Throes is the one that faces High On Tulsa Heat. Yes the songwriting here ranks somewhere between top shelf and unmatched, but the production and recording of the effort teeters somewhere between lazy and uninspired, making for a project that is hard to engage in cover to cover, giving little delineation between songs, and suffering from a blandness that will unfortunately and unnecessarily limit the size of the audience the album will appeal to. Songphiles will rejoice, but so few beyond will give this album anything more than a sniff.

Some fans may say, “Hey, who cares?” This approach keeps the shows intimate and the inspiration flowing to Moreland. But for all the critical praise he’s received, Moreland’s footprint still remains curiously small. When I made similar observations of the production of Moreland’s In The Throes album, it was met with a grumble from some of his fans, and even from Moreland himself. Never mind that I still gave the album a top grade and nominated it for Album of the Year, Moreland’s response was “Thanks, I guess?” Another fan mauled me for making such misguided observations, saying that Moreland pawned everything he owned to make the album, so who was I to criticize it? Didn’t I know he plays most of the instruments himself? Maybe it’s too erudite for my little country music website. What have I ever done creative, and what is “country” music these days, anyway?

Of course my passing notes on the production were only meant constructively, which after all, is the point of artistic criticism.

But with the response I received I wasn’t surprised to find subpar production on this new effort, or that Moreland’s stature still seems to be disproportionately low compared to his songwriting talent. We’re not talking about hiring Billy Sherrill or breaking the bank on some big studio. It just would have been nice just to see some growth here; a little more effort towards fleshing out these songs in a way that would broaden their appeal. Just sweeten up the vocals where they don’t sound like they’re recorded from across the room, and maybe get a better band for a song or two to spice things up.

But maybe staring success in the face is the reason Moreland decided to baulk on bringing an elevated level of quality to this record, even though now he hypothetically has the backing to do it. There’s this romantic notion in some independent music circles about keeping things subdued, of this strange pride in screwing things up a little bit and being irresponsible to oneself, as if there’s some poetry in it.

If I thought folks zeroed in too much on one paragraph in an otherwise positive review of In The Throes, I guess I’m just fanning the flames now. It’s John Moreland’s music and he can do whatever he wants with it. But his songs are too good to half ass it. That’s what we’ve learned from the recent success of Jason Isbell and other songwriters. The stripped down approach to recording some of the songs on this record are probably perfect, but not for ten tracks on now two consecutive albums from an artist who deserves to be heard by a wider ear.

John Moreland is a great songwriter, and High On Tulsa Heat is a great album that will be hard to top in songwriting in 2015. And that’s why it’s worth criticizing, and why Moreland’s music is worth an extra effort to have it be heard.