Ascending from the ashes of the country music underground’s ultimate proving ground known as the .357 String Band, banjo player and songwriter Joseph Huber releases his second solo offering, Tongues of Fire. With some songs originally meant for the now deceased .357 project, and some that speak to the causes of its demise and dealing with its aftermath, Huber compiles an engaging and surprisingly bright-sounding album that speaks true to his life, and is easy to relate to yours.

It is difficult to describe Tongues of Fire without comparing it to Joseph’s first solo album Bury Me Where I Fall which in contrast was very dark, and not from the easy avenues of screams and Satan references, but from deep and intelligent songwriting and eery chord structures. Tongues of Fire takes almost an exact opposite approach, with a lighter feel to virtually all these songs even when the lyrics deal with dark subject matter. In this respect Bury Me Where I Fall and Tongues of Fire make an excellent tandem. They create a duality, a fulfilling yin and yang approach where the two projects combined become better than the sum of their parts.

Joseph Huber doesn’t fit the average mold of an ultra-talented musical artist. We’re used to the best and brightest being tortured and fey, yet Joe is surprisingly clear-eyed and relate-able. He’s just like you and I…well…except for being one of the best banjo players I have ever seen, yet giving absolutely nothing up when it comes to his songwriting, and also being able to master guitar and fiddle. He’s a creative dynamo, but the struggles he goes through are simple: trying to find his place in the world, searching for balance; not the deep torment or torturous pursuit for meaning that usually comes with the hyper-creative archetype. 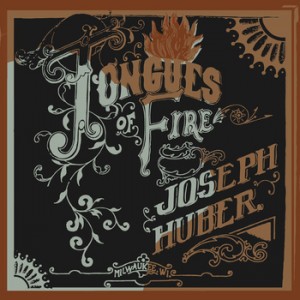 And that is what imbibes Tongues of Fire with that intangible thing that makes certain albums feel warm to you. This album is about Joe searching and finding that sense of balance and purpose, while still recognizing that certain wild desires are there and will always be.

Though on the surface Tongues of Fire may seem like a less poetic approach, after a few listens you find the poetry very much alive in songs like “An Old Mountain Tune” and “Dance Around The Daggers”. “Iron Rail” seems to speak to the hopeless, caged feeling Joe may have been laboring under in .357, while the theme can speak to frustrations in all of us. “Fell Off the Wagon” is the outright fun song that was lacking from Joe’s first release. And just about the time you wonder where Huber’s signature blazing banjo is on this album, here comes “Walkin’ Fine”.

On some songs like “Where the Shadows Shiver to Sleep” I wondered how it would sound with a darker approach to match the song’s dark theme, instead of the playful one it employs. Huber shows a better mastery of DIY recording in his second attempt, though on his first album his lack of recording skills did nothing but compliment his dark approach. It is still good to see his home engineering skill set dramatically improve, yet not grow past the one-man-band approach so Tongues of Fire still gives a fair representation of what you will see from Joseph live.

“Hello, Milwaukee” in the heart of the track order is also the heart of this album. It spells out the struggles Joe has faced, and then the sense of fulfillment when he finds out what he’s been searching for is what he left. This sense of fulfillment is what permeates this album, beyond any of the songs or words or any individual instrumental performances, to make this album special and give it an infectious warmth. Listening to this album, you are happy for Huber.

And whether you can relate to Huber’s sense of content or you are driven by the faith that your contentment still lingers out there waiting for you to find, Joseph Huber’s Tongues of Fire finds a way to speak to you.

Purchase Tongues of Fire on Bandcamp