Emerging from the ashes of one of country music’s most legendary underground outfits in the .357 String Band, and sprouting up from beneath the obscurity blanketing the truly independent musician, Joseph Huber has become to many like a Townes Van Zandt of our time, terribly under-the-radar, refreshingly untainted by the trend chasing of the musical rat race, endearing in his modesty, but most importantly, and enigmatic and generational songwriter.

There were no exclusive first listens to singles preceding this release, no song and video premiers, no big named producers or guest duets to tout. To a performer like Joseph Huber, Americana feels mainstream. He approaches his craft like a local artisan, just happy to get bills paid and see the satisfied faces of individuals who appreciate his wares and the personal care that went into them. If his efforts find an audience that can allow him to continue to his work, all the better. But no compromise will ever creep into the process to fulfill that pursuit. He’d rather sit in Milwaukee and toil at his other passion of making custom wood furniture than try to figure out how to break into the affluent class America via marketing his art. Mass consumerism is where the makers mark fades, and the love and passion instilled in personal expressions often sours.

Now five records deep into his solo efforts—which is sort of hard to fathom in itself—Moondog is Joseph Huber’s most expansive and involved record yet. Coming in with fifteen tracks, the songs of this album are more fleshed out with instrumentation than his previous song cycles, still mostly of the acrostic nature Huber is known for, but with electric guitar and simple drums also included to texturize certain songs. Also present is Huber’s signature recording style, a sort of watery and faraway tone that makes everything sound like its being filtered through a sepia memory, delightfully warm and familiar, imbued with nostalgia, making the songs and the moments come across as weighty, and not as much as new, but rediscovered or reclaimed, like a fond moment from one’s past jarred back to the forefront of thought by a passing smell or melody.

A deftly-skilled multi-instrumentalist, Joseph Huber presented himself as one of the best banjo players in our generation while with the .357 String Band. Now there’s nothing with strings he can’t find a melody in. In shades of folk, bluegrass, Celtic modes, and even some uniquely honky tonk moments on this record, the songs of Huber give words, rhythm, and melody to the cool-minded reflections that we all come to in the few quiet moments in the detritus bustle of everyday life, but that pass so fleeting, we forget their wisdom in the proceeding moments. 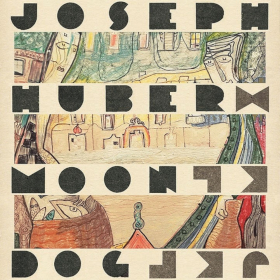 Instead of proselytizing about political ideologies or current events that only fit a very narrow space in time and appeal to a particular mindset, a Joseph Huber song delves into the very inner workings of the human psyche and phenomenons of life that shape our perspective and path. “Another Man’s Shoes” isn’t just another run through the importance of seeing the world through the perspective of others, it compels you to heed it. “Geronimo!” deals with the dichotomy of freedom in a way that’s been done before, but few times with such depth.

Joseph Huber also specializes in the epic. The 7 1/2-minute “A Northwood Waltz” at the center of Moondog may not accomplish its intended goal, and instead come across as an unremarkable reworking of Simon & Garfunkel’s “The Boxer.” But the 9-minute “The Wild Swans of Coole” is almost inescapable in its envelopment, not just in its story, but the sonic array that Joseph pulls from to accomplish it, venturing well beyond string music, while still staying smartly tethered to it. The theme of “Pale, Lonesome Rider” may be a little more grounded, but is no less of an enthralling listening experience. Songs like “Moondog” and “After You” also make sure that sheer entertainment value is included in this record.

Moondog might not be the best entry point into the music of Joseph Huber, but more a release for those established apostles of Huber looking to satiate their tireless appetite for his music, and those soon to become one. The album probably could have left a few tracks on the cutting house floor, not from the quality of any one effort, but how altogether this record becomes tedious in its middle portions. Some of the percussion and loudness doesn’t meld with Huber’s production style, getting in the way of the words and mood, and impinging on the space between the notes and tones that makes some of Huber’s best songs so special. More than any other record, Moondog feels like a representation of the live show, where tempo is more paramount. Also, arguably the two best tracks not just on this record, but in the catalog of Joseph Huber come at the very end—a handsome reward, but one that some may never get to.

Nonetheless, great rewards await those music fans who don’t just accept whatever audio options are presented easy to the consumer, but those that require a little digging to unearth. Tapping your toes can help get you through a day, but a Joseph Huber song can change your life. But you have to slow down, you have to unplug, you have to take a deep breath and let the wisdom of life that’s all around us seep into your brain, and prevail. The music of Joseph Huber is a gateway for this.