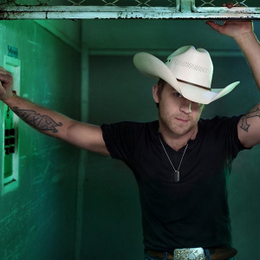 These are lines pulled from the opening track of Justin Moore’s new album Off The Beaten Path, and with a steel guitar riding high in the mix accompanying Justin’s imperatives and a wide-brimmed cowboy hat crowning his backlit visage splayed across the album cover, the distinguishing music listener who doesn’t care too much for today’s country radio may conclude they have just found a keeper.

Then of course a few songs later, Justin seems to forget his own proclamations and manages to name drop Kim Kardashian, J-Lo, Snoo P Double G, filch a line from “Honky Tonk Badonkadonk,” and even try his hand at country rapping. And that’s just in one song. Hey we’ve all got to eat, right?

Justin Moore’s 2011 album Outlaws Like Me was declared the worst album ever by Saving Country Music up to that moment in time; a diagnosis I still stand behind with puffed chest. Earlier this year when Moore somehow sniveled his way onto the lineup of Willie Nelson’s 4th of July Picnic, as I stood 50 feet from the stage listening to Justin attempt to Svengali the crowd into believing that he was an industry outsider and one of the last champions of real country music, the only reason I didn’t rush the stage was because I didn’t have a good plan of what I would do when I got there, and I wanted to still be around later for Willie’s set.

Despite a few moments of respite, Off The Beaten Path is like an expeditionary campaign to discover and exploit every single worn out modern lyrical trope of American country music, and to try and make some new ones. Luke Bryan may be the latest of the discipline, but Justin Moore was the first to master disregarding any and all independent thinking or self-desired creative penchants to simply become the country music equivalent of Silly Putty for the suits to do whatever they choose with. And the fate they chose for Justin was to be Big Machine Record’s representative for attempting to re-integrate the revenue of anti-Nashville sentiment by misleading the public into believing Justin’s career was the result of a repressive industry looking to dog him at every turn because he was too country. Yes, he’s an Outlaw, bucking the system, flying in the face of artists like Taylor Swift….whom he shares the same record label with. 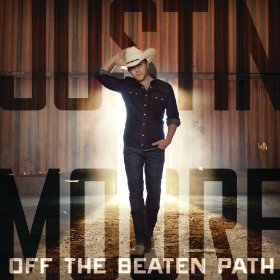 But though it would be easy and romantic to declare Justin Moore’s 2013 offering as bad enough to depose 2011’s Outlaws Like Me at the shameful peak of crap mountain and use this album as a vehicle to vent any and all unresolved anger held over from my personal life in the form of the most venomous of rants, the real truth of the matter is that Off The Beaten Path is not nearly as bad as one would initially assume.

It’s still more bad than good without a doubt, with a strong contingent of country checklist songs eroding any redemptive moments on the album and then some. But I was surprised how unpredictable this album was, how some songs took a really progressive approach instead of just relying on rock guitar riffs, and how many slow, meaningful songs made the final cut.

The only reason the song “Old Back In The New School” could be considered bad is because it’s coming from Justin Moore, rendering it hypocritical. But on it’s own, it’s not too shabby. Neither is the slow and sincere duet with Miranda Lambert  “Old Habits.” In fact, it’s downright good, and wouldn’t be a bad contender for the “Vocal Event” categories of the big country award shows. If it weren’t for lines like “We work hard, play hard, take our paychecks straight to the Wal-Mart. Girls will out drink you, boys will out Hank you…” the song “This Kind Of Town” could really be something sensational in the way the song is crafted.

But unfortunately, that line does exist in the song, and so do a dozen other cringe-inducing moments on Off The Beaten Path. Really, it’s the words of this album that hold it back the most. There’s some authentic country instrumentation here, and some really sweet moments sonically. And then there’s songs like the title track that feel oh so cliche in both words and structure, and the aforementioned  country-rapping name-dropping abomination known as “I’d Want It To Be Yours” that will probably receive its own dedicated diagramming and ridicule in due course.

As bad as it is, I have to give Justin Moore and his songwriters credit for guile in crafting the song “Country Radio” that will flatter every programming manager from coast to Clear Channel coast and probably make it into radio rotations despite its shortcomings. “For Some Ol’ Redneck Reason” that features a crotchety, borderline disturbing appearance from Charlie Daniels in a moment of token Patriotism probably won’t. Whatever happened to going to LA via Omaha?

But color me surprised. Certainly not a good album, and I’m definitely not recommending it. But on Off The Beaten Path, Justin Moore peels himself off the very bottom of the country music mat, and proves that maybe if he wasn’t such a tool, he would have a little something.