Country music would most definitely experience an existential crisis in the coming years, but it wouldn’t be at the hand of Taylor Swift, or pop. Instead, it would be a grandiose, braggadocios, and genre-bending style of country music incorporating heavy influences of hip-hop that went on to be coined “Bro-Country” that was at the heart of a country music crisis. Meanwhile Taylor Swift would switch from working with her long-time producer Nathan Chapman, to utilizing pop producers like Max Martin and Jack Antonoff, and exited the genre entirely with her album 1989 (released five years ago yesterday). With the Taylor Swift departure, country lost a woman who could be assured headliner status and radio play, while one of the primary symptoms of Bro-Country’s dominance was the virtual extinction of women from having a voice in the format at all. It was a double whammy that put the representation of women in mainstream country in a precarious spot.

Years from now we will look back on the shadow cast on an entire generation of women who never made it in mainstream country due to a collaboration of events and trends that virtually excluded them from equal opportunities. Leading the list of overlooked artists might be Portland, Maine-native Kalie Shorr. She has become sort of the poster child for country music’s lost female representation during her time in Nashville. She remains unsigned and can’t even sniff radio play, yet she possesses universally-recognized songwriting skills, a quality voice, and a dogged persistence to break through the glass ceiling, including being one of the principle performers and champions of the renown Song Suffragettes songwriter rounds held in Nashville at The Listening Room Café on a weekly basis.

There are some qualifying points in analyzing the 25-year-old’s success, or lack thereof. First, even though much has been made by many media members of Kalie Shorr’s career so far, Open Book is actually her first full-length album. Second, Kalie Shorr, just like a lot of mainstream country hopefuls, hasn’t spent years on the road in smelly vans, couch surfing and crashing the honky tonk circuit across the country, trying to build a fan base via grassroots and in-person sweat equity and dues paying similar to what many independent country women have done to start their careers, including Kelsey Waldon, Sarah Shook, Jaime Wyatt, and others that created sustainable success for themselves via the “get in the van” mentality.

But perhaps most damning to Kalie Shorr’s mainstream prospects is that she’s just too damn honest, too good of a songwriter, and too unwilling to be tampered with or sculpted by the Music Row powers that be. She’s unwilling to play ball with their dog and pony show, which is debilitating to any artist that shows up to town without a strong, established fan base and the power to negotiate creative freedom into a contract. And as Kalie Shorr proves in her new album Open Book, she’s completely unopen to the idea of being censored or radio station friendly.

Kalie Shorr may have an independent-minded philosophy, but she is decidedly pop country in style. This is indisputable, and immediately obvious when you cue up her music. And in that pop country realm, there is no grassroots model from which to build your career from the ground up. There’s not a circuit of tour stops of mid-sized venues all across the country, side players willing to crash on floors to help you see your dream come to fruition, few if any independently-owned festivals willing to give you opportunities on side stages and in opening slots, or blogs and podcasts there ready to promote your music to rabid fans. Witrh the mainstream pop country style, you must rely on big radio, or the opportunity to land a spot on a major tour leaving out of Nashville, or you end up sidelined and waiting tables.

Kalie Shorr has received some of those big mainstream opportunities. She toured with CMT’s Next Women of Country, and Bobby Bones has played her on his all women podcast. But sometimes these efforts feel just as much exclusionary as they do legitimate opportunities at exposure. In the case of Kalie Shorr, they resulted in some name recognition and fans beyond Nashville, but still no significant mainstream representation or support. Meanwhile the Americana crowd, the traditional country crowd, and the greater population of independent country music fans will struggle to identify with her music. It just sounds too pop. 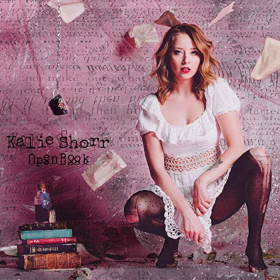 But none of these frustrations is what led to the high drama, candid revelations, and raw language and emotions that make Open Book a standout in the usually cotton candy world of country pop. It’s always sunny in Nashville, at least west of the Cumberland River, or unless you’re eliciting for alligator tears in some sappy, formulaic radio ballad. But Kalie Shorr isn’t having any of that. Open Book is just that—an unabashed revelation of bad decisions, naked sin, sadness, anger, personal issues, and self-loathing, making her persona more dark and manic than most of the Americana artists on the east side of town who love to lie about the pathetic nature of their lives to give their songs “soul.”

Kalie Shorr’s Open Book was written in the aftermath of a bad relationship that nose-dived into a messy breakup and the death of a family member, and you believe every scandalous word she has to say. And at times it becomes very scandalous. Open Book will be a little too honest and revealing for some, while some of the songs are outright graphic and too sexually explicit for certain audiences, including the younger girls that female pop country generally reaches for. There’s a little bit of revenge. You can probably imagine what the song “F U Forever” is about, and the self-censoring doesn’t last beyond the title. But there’s no keying of the ex-boyfriend’s truck or lighting his stuff on fire. Shorr admits she’s the one that brought on most of her trouble, or at least allowed it to happen, while taking full responsibility for the ramifications due to giving into her worst desires and suffering from abandonment issues. This honesty is what makes Open Book so compelling, and noteworthy.

But this is all set to music that is very much in the Taylor Swift vein of pop country. The music and melodies of Open Book are textbook Taylor Swift in 2010, with that Nathan Chapman production influence patently evident, and the sugary nature of the music itself sitting right on the very edge of what anyone would ever consider “country.” Just like those early Taylor Swift records, there are little hints of banjo, steel guitar, fiddle, and mandolin dropped in. But the majority of the music is pop. However, unlike a lot of contemporary radio country or pop, there is no electronic drums, and little synthesizer. Nonetheless, the overall takeaway is best encapsulated in the commonly-used musical identifier of “saccharine.” In the song “Gatsby,” Kalie Shorr even seems to be mocking pop music. But it’s not enough to pull you away from thinking this is music your daughter would listen to, if it were age appropriate, which at times it very much isn’t.

As has been expressed by many a concerned mainstream country listener over the last few years, if we could go back 10 years to the time when Taylor Swift was the worst thing we had to contend with on country radio, it would feel like a complete 180 reversal from where much of country radio is today. You thought Taylor was pop? Then go listen to Sam Hunt’s latest single, or to the collaborations of top country stars with Marshmello and Justin Bieber dominating the charts. When Kalie Shorr was growing up, Taylor Swift was defining country music by winning the biggest awards and dominating radio. Purists will hang their heads and shake their fists at this reality, but it’s just the way of things, and you hear that coming through Kalie’s music. Taylor Swift was also a quality songwriter during her time in country, just as Kalie Shorr is now.

Kalie Shorr is in an unenviable position. She has catchy melodies and infectious grooves that would be ripe for radio, set to lyric sheets full of material radio would never touch. And with some of it, radio shouldn’t touch it. Meanwhile this stuff will be considered way too fluffy from the folks who actually listen to lyrics in the Americana and independent side of country, because their prejudices just won’t allow them to listen to what she has to say. This makes Kalie Shorr neither this nor that, and these days with so many music options to choose from and the tribal nature of the culture war, it’s more critical than ever to find a home. You can’t just blame the matriarchy and the closed-minded nature of Music Row for the general malaise that has hung over the career of Kalie Shorr. She’s just sort of in this no man’s land, in a “no women” genre. And now, the new hot thing in country, is country. This puts Shorr in an even tougher position.

That said, if some of the standout songs on Kalie Shorr’s Open Book defined pop country in 2019, we would be in a much better place, and there would be significantly less conflict in the country format. Traditionalists would still gripe that it’s way too pop. But the simple unfettered expressionism Kalie Shorr exercises within these 13 songs would seem like such a breath of fresh air if they hit the airwaves, and the project symbolizes a victory of sorts that a strong-willed songwriter could fit such expressions to accessible music and melodies.

There is nothing wrong with pop music. There is also nothing wrong with pop influences in country, and they’ve always been there since the days of Eddy Arnold. The problem is when you try to try and pass off pop as country. The music of Kalie Shorr sits right on that dividing line that compels conflict about what to call it.

But what Kalie Shorr has also done in Open Book is what every true artist wishes to do whenever the make a record, which is capture raw emotions in bold strokes that resonate deeply with an audience and connect us with our shared humanity. Even when she’s doing wrong, you want to root for her, because you’ve been there too, but didn’t have the guts to put it out there for public consumption like she does. Open Book in many ways is a marvelous work. But just like the career of Kalie Shorr, the question is, “Who is the audience?”