We first learned about Kree Harrison when she became the runner-up on American Idol in 2013—not exactly the best foot to start off on with country music traditionalists or throwback Muscle Shoals soul aficionados. But she did perform songs from Patty Griffin, Susan Tedeschi, and Kris Kristofferson during the competition, so it wasn’t all bad. And after her American Idol run, it appeared she was immediately being groomed for a career in country music. Kree performed at the CMT Awards later that summer, and with the talk just starting to center on where country music would find its next female superstars, Kree Harrison’s name came up in the conversation quite often.

But then she disappeared for three years. Where did she go? I’m honestly asking because I have no idea. Apparently Universal Music Group Nashville officially passed on Harrison during the summer of 2013, and poof, whatever momentum she built up from her penultimate placing on American Idol went out the window. Another opportunity for a potential female country star of substance and appeal squandered.

And perhaps that was a good thing. If Music Row would have gotten hold of Kree Harrison, it would have been a radio-friendly lead single alienating her core fans that would have been rejected by radio anyway, a delayed EP that would go generally ignored when it was released, leading to being unceremoniously dropped from whatever label took a chance on her to begin with.

Many say that if Hank Williams, Johnny Cash, or Waylon Jennings were alive today, Nashville would completely ignore them. Well if Tammy Wynette and Patsy Cline were around today, Music Row would figure out a away to squander their entire careers with quizzical missteps and misappropriated resources. Music Row has no idea what to do with women artists. Remember how promising Mickey Guyton and her single “Better Than You Left Me” were a while ago? Now it seems her mainstream career is all but over. Brandy Clark just released one of the best country records this year, and it was virtually dead on arrival. All the talk of supporting female artists in country has yet to translate into anything meaningful unless you’re a female playing pop music. 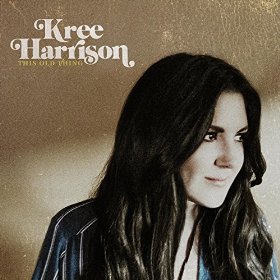 So though it may not help her personal wealth or public brand, perhaps it was good for Kree Harrison that Music Row took a pass. Screw all that mess; you might as well do what you want because there’s a good chance it’s going to be willfully disregarded by the mainstream anyway. And that is what Kree Harrison has clearly done on her debut record, This Old Thing.

Yet the title track and lead single released in April could be a little hard for a country fan to warm up to. It’s not that “This Old Thing” was nonsense pandering or pop paraded as country. It was an entirely other adverse trend in independent country right now: country artists putting out horn-driven vintage-styled R&B songs.

This whole Memphis/Muscle Shoals movement isn’t acrid in itself. Much of the music is downright excellent, and a healthier alternative to country pop for sure. It’s just how pervasive this trend has become in east Nashville and beyond. Sure, let Lake Street Dive and Anderson East partake because it’s what they built their career upon. But I don’t need to hear funky blue-eyed soul coming from Corb Lund. It’s not uncommon as an independent country music fan to feel abandoned in 2016 because of all the horn sections and funky rhythms.

But This Old Thing could be fairly characterized as the tale of two records. On one side are the jangly, horn-driven tunes, and on the other are stiff-backed and fairly straightforward traditional country songs. Kree Harrison couldn’t make her mind up, so she did both, and did both fairly well, and quite surprisingly for someone whose biggest bullet point so far is an American Idol placing.

Along with covering the Harland Howard classic “He Called Me Baby” once recorded by Patsy Cline, Kree Harrison puts together quite a few co-penned, excellently-written trad. country tearjerkers that are hard to criticize. “Something Else” and “Drinking For Two” can stand on their hind legs and makes a fist in front of any other traditional country song by a modern artist. Other selections are a bit more contemporary country, like “Outta My Mind” and “Your Whiskey,” yet still feel very much like traditional country songs in the songwriting and some of the styling.

Ultimately the country material comprises the minority of this record, but it doesn’t feel like as much of a loss because Kree Harrison does the throwback soul thing so well. All of This Old Thing‘s selections fall generally under the “vintage” category, or could be characterized as Americana. There is great songwriting throughout this record, and Kree’s pen is featured on 9 of the album’s 13 tracks. Recorded in North Carolina as opposed to Nashville, This Old Thing was allowed to breath on its own and flap its wings without worrying about prying eyes or compromises to meet someone else’s standards.

This album will not go anywhere, because that’s just the way of things, and the singles have already bombed. As we’ve seen countless times from reality TV stars, that attention rarely translates after the season finale, especially if there is an extended pause like Kree experienced. But if nothing else, This Old Thing fleshed out that Kree Harrison is not a mainstream reject, she is an Americana hopeful. Instead of starring at a future of slogging it out with mainstream execs to record the music she wants, she can build grassroots support behind quality songs and recordings on the path to a sustainable career.