Album Review – Larry & His Flask “All That We Know”

Larry & His Flask from the ultra hippie nouveau town of Bend, OR have been making the rounds on the live circuit for years now, leaving legions of disciples and gallons of sweat behind at every stop. Putting out as much energy as any band has in the history of ever, and a lineup that necessitates shoving multiple tables together at every restaurant the tour van stops at, LAHF’s live show is impressionable to say the least.

But if you’re going to make you mark in music, you have to put out albums as well, and not just fleeting EP’s or split 7″‘s. At the same time, it is important to understand that LAHF is a live band first. To attempt to translate the energy of their live show to the recorded format, as well as the personality and brotherhood that make LAHF such a unique project, would be a massively-intimidating task for any band, producer, studio, or label. That is why I’m glad they waited a bit before putting out this album, and yes, it was worth the wait. 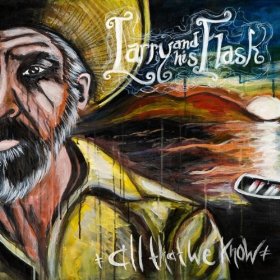 The first thing you need to understand about Larry & His Flask is that you can’t compartmentalize the different elements of the band: the chemistry of the members, the music, the words, the wild energy they evoke, and the message the entire package is meant to convey. It is all 100% intertwined, with every element dependent on the others. If they did not put out so much energy on stage, the message would not be conveyed properly. If they weren’t such a tight knit group, the music and words would not carry the same weight. I know you could same something similar about any band, but with LAHF, it is emphasized. Because they are not just a band, and this is not just music.

If I only had a few words to describe them, I wouldn’t even mention their wild energy, or the fun atmosphere they bring to the live show. I would say that Larry & His Flask are a lesson. They are a message. They are the anger of righteous wisdom. LAHF are writing the soundtrack to the great American awakening. They don’t jump around stage and play fast simply as a gimmick. It is a necessary aesthetic to their mission, which is to deliver the knowledge to people that they only have one live to live, and they better get to living it.

Just like you can’t let the speed and antics allow you to overlook their message, you also can’t overlook the top-notch instrumentation and arrangements of the songs, as well as some the most well-arranged and performed multi-part harmonies you will find in music these days. And though they might be one of the best examples of a punk band that traded in their electric gear for traditional string instruments, I think that characterization might diminish the unique approach of their music. Along with all the other elements, LAHF build their music using dark cords and unusual, unintuitive changes and progressions that give them a unique sound beyond any traditional string or punk music. 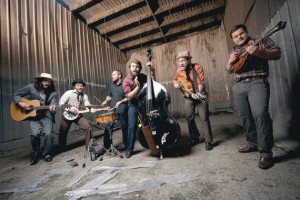 And the songwriting and lyrics can’t be overlooked either. No, they are not going to wow you with every phrase turn, but the lyricism is far beyond window dressing for a danceable beat, and does carry that gut-checking quality of good songwriting at times. The honesty is brutal, and they follow the old saw of writing what they know about. I don’t know how universally appealing songs about the ragged road life are to the masses, and some might find this “message” I keep ballyhooing a little preachy, but it doesn’t mean those detractors couldn’t learn a thing or two from it.

If you notice, I’m not really contrasting their live and recorded music, because that slippery slope that I alluded to before was navigated quite well. Though there’s six folks who need to get their licks in on each song, this album and these songs don’t feel muddy or busy, and the important elements to a song are never walked-over or buried. There’s no need to talk about individual songs because I like them all, though I will say I am struggling to find a signature song or songs here; the magic bullet if you had one chance to convert someone into a Larry & His Flask fan.

My other concern about this band is it’s long-term outlook. Bands that burn hot can burn out quickly. This is going to be LAHF’s biggest challenge moving forward, is keeping the whole thing feeling fresh, and how to evolve when the youthful energy is not as easily called on. Luckily, they have a lot of diverse talent to call on as well, and a loyalty to the project and themselves which might create a strength for sustainability. My impression is that joining LAHF is beyond a commitment, it is a blood oath. Semper Fi type stuff.

There’s not a whole lot of twang or traditionalism here. This is new school music played on old school instruments. And it’s good. Very good.

Preview Tracks and Purchase All That We Know