With her first self-titled album, ===> Little Lisa Dixie <=== is helping make the case that in independent/underground country, 2011 might be the year of the woman. With surprisingly good, classic songwriting, excellent use of texture, and solid instrumentation, she has made the album that her fans have waited years for be one that is well worth the wait.

This album is part country, part hot-rod rockabilly, with a vintage feel covering everything in the tones and textures. I can’t emphasize enough the wit and appreciation for the classic model of how to turn a phrase in a country song that is illustrated in some of these tracks. The song “Stop Acting Like a Lady” works to juxtapose the scorned woman with man just like Loretta Lynn did back in the day. This is done to even more perfection in “Getting Over You”.

The only way I’m getting over you is by getting under him.

But where I was really impressed with this song is when she entered the chorus, she did not go back to the catchy hook 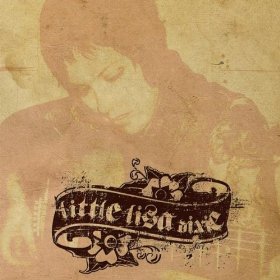 , she replaces it with the much more docile “The only way to get over you is by loving him tonight“, just like the greats used to do. This shows that Little Lisa hasn’t just heard Loretta and Tammy, she’s listened to them, intently, and understood and embraced the thematic virtues behind their songs.

But if classic country is not your speed and you want a little rockabilly, this album has you covered as well. “Devil’s Gate” is a monster of a song, marinated in reverb, powder blue, and neon light. This song and the other rockabilly-feeling “Dance With The Devil” have sublime, masterful combinations of bright and dark-sounding chords that pull your ear right into the music as the words sell your soul on the story.

I’m not going to try to sell you on the idea that Little Lisa Dixie has one of the best female voices going, but it is solid, and she knows how to use what she has, by knowing just how long to hold a note, or when to shut it off in phrasing. And for a femme voice, it is naturally deep, which gives it that retro sexiness, almost a musk that fits the music exquisitely. Little Lisa picked the type of music that fits her voice, which is not a common as you would think in music, especially for women.

To be fair, the album may have a couple of punch out tracks for some. “Stoned Again” doesn’t really move the needle for me. The lyrics for “Woke Up Broke” seem a little cliche, but the super-twang on the Telecaster-style guitar and Lisa’s vocal phrasing are almost good enough in the song to overlook it’s lyrical lightweightedness. The vision and arrangement on this album is great. The reverb and echo is drenching, but not overindulged, and little details were not overlooked, like the horn and bells in “Dance With The Devil”. To some the album may sound a little dirty. I heard a few forgivable flubs that speak to tracked-out recording, but I think a lot of attention was paid by Little Lisa and friends to set a vintage mood, and the right specific vintage mood for each song, and once you embrace this, it enhances the songs instead of holding them back.

If you like ladies that aren’t afraid to let loose, Little Lisa Dixie is your girl.