This is the music I have been waiting my whole life for. I am a changed man for having listened to this album. It brought me back to being a little kid again, to the first time I heard music, at Christmas or something, where it was this magical thing that uplifted my spirit, yet at the same time was a very visceral experience where you lose all sense of deportment and start jiggling around like a child possessed.

The first time I turned this album on, I was out of my chair, stomping my foot on the floor, banging my head, making a complete ass out of myself for the entertainment of the four walls of the Saving Country Music headquarters. It made a music virgin out of me again. I listen to a LOT of music folks, and like a hardened drunk who has made a career of building up years upon years of tolerance, it takes the immensely strong stuff to do the trick. Lone Wolf does the trick. 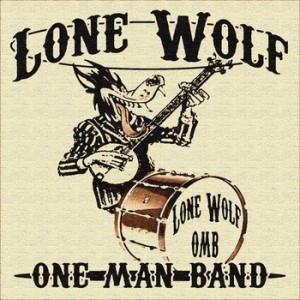 And usually the stuff that does the trick on the first listen doesn’t hold up for long. It’s like a sugar high. It’s those albums you have to listen to a few times through to get in to that stick with you for a while. Not Lone Wolf. It is infectious, catchy, even repetitive in a sense, but there is something infinitely deep here that makes it not just rattle your bones, but rattle your soul. As carnal and primitive as it is, it is also artistic and sublime.

There’s not good songs and bad songs here, it’s not that kind of album; the beginning and end of each song is only there to give you a chance to take a breath. Normally I would mercilessly chastise an album like this for being obnoxiously consistent in a short sighted manner. All the songs are fast, and they all work the same way. But with this project, the lack of diversity and color is one of its main strengths. It is like a primal trace that delivers you to some elevated state consciousnesses. You are a better person for listening to Lone Wolf, even though all that’s really here is banjo, tambourine on bass drum, and maybe some spoons and shakers.

The lyrics are endearingly undefinable most of the time, delivered in a guttural pitch. They’re meant to be felt, not heard. Two of the songs are in Spanish, and the pace and tone makes them almost like a Mongolian meditation chant.

But let not your heart be troubled by all this high talk, when you boil this music down, it is still simply country music, banjo music, from a way way back time, almost ancient, even older than old-time. Lone Wolf seems to be able to conjure up something from the past with his music, like a tantric time machine. Simply put, this music reminds you that you’re alive. It isn’t just fast and catchy, it isn’t even just soulful; it is spiritual, and at the same time, so carnal that it can bust through all prejudices built on taste, upbringing, disposition, geography, religious or political affiliation, or gender. It bores right down to the heart of your humanness, and tickles your life force. 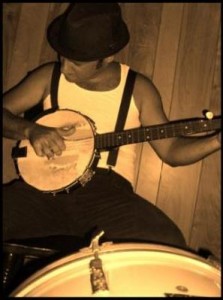 I know some of you are reading this and laughing at such grandstanding. Laugh away, I don’t give a shit. I know what I’m hearing. And it may not affect you the way it affected me, but if this is the case I don’t disagree with you, I feel sorry for you, because you are missing out.

This is the best clawhammer banjo music I have heard in the modern era. Clawhammer is the older style of banjo playing, from over 100 years ago, that was mostly replaced when pure fingerpicking became popular with bluegrass in the 40’s and 50’s. The clawhammer is what gives Lone Wolf such an ancient feel, and the style works with the straightforward consistency of the compositions in this album, because that’s how the old recordings were done as well. There were no producers, no sense of putting fast songs and slow songs together or mixing up styles. They just captured the songs as they were written, and there’s a lot of purity in that method. Lone Wolf wrote all but one of these 13 songs, that being the traditional “Morphine, and he has made the clawhammer style his own by striking the snare top of the banjo with his thumb while playing, giving it an extra, percussive element.

Lone Wolf is Bruno Esposito, a Northerner with a thick Italian-American accent that cut his teeth working in pizzerias. You may think this sounds completely out of place for a banjo player, but I’ve always said when you find a human that seems to be the combination of ill fitting parts, that’s how you know you’ve found someone on the right life path. He’s played bass guitar in punk bands, but when he was living down in Georgia and playing upright bass in a bluegrass band, he was exposed to the banjo and the clawhammer style, and never looked back. His inability to find other bluegrass players as he moved around and evolved his style led to him becoming a one man band, adding bass drum and percussion to the show. I believe he has also spent time down in south and central America, which is where the Spanish language and influence creeps into his music at times.

I can’t say enough about this music folks. I know some will not like it because there not much modern about this. But I can even see many people who hate country and bluegrass music loving this, people who are into world music and ethnic music and even dance music. It’s that catchy and infectious, but it doesn’t insult your intelligence or taste either. And there’s a lot of blues here too. If you’re into the Scott Biram’s and Hillstomp’s, or even the old blues legends, this will have huge appeal to you as well.

Reverend Nix, DJ of the Mojo Medicine Show, broadcast right here on SCM LIVE deserves big props for bringing Lone Wolf to our attention. The first time I heard him was on a live performance on Nix’s show, and even then I had a feeling Lone Wolf was something special.