Album Review – Lukas Nelson and Promise of the Real

On the bright shining morn or shimmering starlit night when Lukas Nelson was passionately conceived, his pops Willie Nelson must have been in rare form, virile and adrenalized for his ripe age, and far removed from any dysfunction of anatomy or failing of spirit. And when his toes curled and the gift of his love was delivered, such a pure and concentrated form of Willie was fervidly conveyed, no degradation occurred in the generational torch passing.

You can legitimately claim that in raw talent, Lukas Nelson might be the most gifted progeny of a country music superstar the world has ever seen. Perhaps Hank Jr. in his prime or some others may have something to say about that, and there’s newer generations of talent out there that may still have some upside potential to show before final judgement is passed. But Lukas Nelson’s ability to both evoke the timeless magic of his dad’s tone and warble, yet renew it with an original delivery all his own—along with the sheer explosiveness and natural ease of his guitar playing—makes him an awe-inspiring specimen for the theory of pedigree.

In simple musical skills, the talent of Lukas might even surpass that of his famous sire. Of course songwriting and style are a bit harder to tabulate, but Lukas is no slouch in these departments either. Yet nearly 10 years into the performing game now, and Lukas Nelson still feels like he’s attempting to find his footing. The issue is not his talent, or his ability to tell a story through song. If anything, it’s astounding how still under-the-radar Lukas Nelson is when measuring these attributes. It’s his inability to choose or discover a definable lane for his career that keeps him curiously obscure when compared to his skill set. 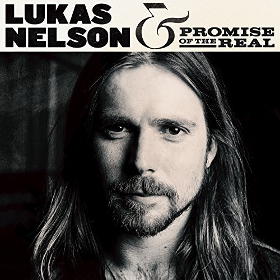 In certain respects you see this indecision play out in his new, self-titled album with The Promise of the Real. The album showcases everything that makes Lukas Nelson an exceptional performer, and worthy of praise for a name all his own, completely divested from his famous father. “Just Outside Of Austin,” with its cutting simplicity and complimentary structure to Lukas’s voice is a timeless song and a perfect example of why you should be paying attention to this performer. The guitar skills Lukas exhibits on the opening song, “Sit Me Down On a Cloud,” and on the extended, 8-minute “Forget About Georgia,” proves that his musical acumen goes far beyond a voice affectation similar to his father’s.

But Lukas Nelson is not country, until he is, and he’s rock and blues, until he isn’t. Naturally country audiences want to gravitate towards him, but he’s not the traditionalist they may hope to find. The psychedelic nature of some of his cuts attract a younger audience, but Lukas also feels like an old soul, implementing steel guitar and backup singers on certain tracks.

Lada Gaga appears on the record, but to what result? Lukas may come across as a little scatterbrained, but he’s trying to forge a musical path all his own from the desire in his heart and the various influences comprising his roots. And despite the sideways glances from some, for those who are willing to be attentive and open-minded, they are rewarded with a diverse, expansive, involved, inspired, and engaging effort never sticking to a single thread of influence, but always adhering to the genre of “real.”

With Lukas, his issue is not capability. It is direction, and focus. Yet this album also has an underlying theme of sorts. Now well into his twenties, it finds Lukas struggling between finding love, and the sense of fear from getting trapped or tied down too quickly. Multiple times on this record, he sings to locations and women as interchangeable, just like Willie and Ray Charles did. It’s similar to that moment when you realize “Georgia On My Mind” isn’t about a state, but about a woman. Or both, or neither. And you realize something about yourself when reflected in the memory of someone else, or someplace different than where you’re standing.

Following in the footsteps of a famous name is a blessing and a curse. It opens doors, yet draws the critical eye of endless comparisons by critics and fans alike. In some respects Lukas seems lost in his own world. He’s the clear heir to the Willie Nelson throne, yet sometimes it seems he would rather sit in a hammock in Hawaii and smoke pot than to soldier forth with the family legacy. And as long as they’re selling Willie Nelson cotton T-shirts for $85 dollars at shows and licensing his face to stick on egregiously-overpriced boutique marijuana products, Lukas’s output isn’t essential to keeping the war chest full.

But someday Willie will be gone and Lukas will still be here. And hopefully Lukas will pick up that legacy and keep moving forward with it. Because a world without Willie is not worth living in, but a world with Lukas is a world where the glimmer of Willie’s legacy still shines bright.

Purchase Lukas Nelson and Promise of the Real