From Columbus, OH, the lovely and talented 21-year-old Lydia Loveless offers up her first album with international aspirations in Indestructable Machine, through the Bloodshot Records imprint. In a classic Bloodshot blend of punk and country, Lydia comes out with a bold sound and bawdy content to the delight of many critics and writers. Just in the last week, I have seen her compared to Loretta Lynn, Kitty Wells, and Patsy Cline. I’ve heard her called the next Neko Case, and a cowpunk princess. Rest assured, I like this album more than I don’t. But as legendary football coach Bill Parcells once said after one decent game by a young, promising quarterback, “Put the anointing oil away.”

The other popular point to make about Lydia and this album is how mature the content is for her age. In my little music world, 21 is not young, especially for a female performer. There is a crop of young female musicians out there right now, all below voting age, that are excellent musicians and songwriters, and show maturity in their music with depth, not drinking and drug references. In my opinion, singing about getting sloshed on wine and snorting coke is a green way of trying to garner real-life substance, and furthermore, a little outmoded. It’s fake hussle. Maybe it seemed all fresh in the mid-90’s when Oasis did it. Hank III brought it to the country world in 2005, but now it seems to have run its course, and been replaced by songs that may start with drugs, but end with redemption. 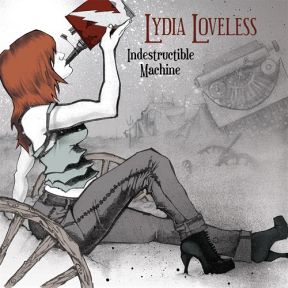 And it makes a difference that Lydia seems to be singing biographically, instead of working through the medium of character. I have no doubt the lyrics are authentic, but that just makes me worried for her well-being instead of personifying some infectious party attitude or empathetic camaraderie. I also can’t help but thinking, did we wait to put out this album until Lydia was 21 because of the bawdy content, or does she include the bawdy content to make up for the perceived weakness of only being 21?

This album is funny, but not always witty. It’s dark, but not always deep. It is sad, but not always soulful. But sometimes it is. I know Lydia put out other independent albums before this, but Indestructable Machine has a lot of the earmarks of a freshman release. The strength is the lyrics, but her over-singing sometimes buries the content. The music is engaging, but an ever-present electric guitar droning with overdrive saps a lot of the space out of the project. It also has that “tracked-out” feel, meaning the parts to the songs were recorded individually, and then reassembled later; a common practice in music, but one that can result in the loss of the groove if not done properly. A lot of the songs on this album are just busy, and you add this to Lydia’s unusual (thought not necessarily bad) cadence, and it just comes across as a little incongruent and confusing to the music mind.

Some of this confusion is on purpose in the first song “Bad Way To Go”, which revives itself with some solid catchiness. “Can’t Change Me” is another catchy track, which leads into “More Like Them”, channeling the style of Cindi Lauper, conjuring visions of Molly Ringwald dancing the bop. In a few places, this album is more powerpop than cowpunk or country. 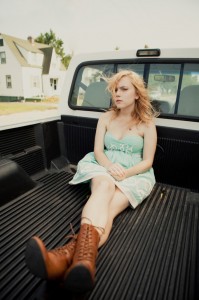 Then the gears shift completely in the hard country composition “How Many Women”, where Lydia’s vocal prowess is displayed, but unfortunately not in conjunction with her usually-stronger songwriting, which comes into play with the next two very entertaining tracks “Jesus Was a Wino” and the fictitious stalking song “Steve Earle”. Some soul sinks in on “Learn To Say No”, a pretty strong track despite the rather innocuous sonic style. “Do Right” reverts back to the self-righteous party-girl motiff, but is balanced by the self-loathing acoustic-driven end track “Crazy.”

For all the holes I’m poking in this Indestructible Machine, overall, this is a really fun album. It is fun to listen to, and at times you will find yourself laughing out loud to the lyrics. And without question, I see tremendous potential here from Lydia, lyrically, sonically, and as a singer. And I do think this album will appeal to a younger audience, and that may be it’s greatest asset, and an important one in a genre bloated with 30-something fans watching those little bits of gray creeping in more each month.

Young artists need encouragement, which Lydia has received from The Washington Post to Spinner. But they need honesty as well. And my honest opinion is Lydia is good, but may still need to do some growing, get some skins on the wall and get out there and tour, and see that people are dying out here and they don’t just need to be touched in the funny bone and stomp their boots, but they need to be touched in the heart as well. That’s what Loretta, Patsy, and Neko did.