Like a jar of Smuckers, Mandolin Orange is full of smiles, sweetness, warm-feelings, and an honest to goodness wholesome good time … sold under a funny name.

I can remember a time when it felt like a romantic couple constituting their own band was considered somewhat of a musical faux pas. It was the whole Sonny and Cher, Captain and Tennille thing. They soured what otherwise was a really sweet idea, and a timeless way to make music. It was all just a little too sappy, so for years it seemed you would rarely see the performing couple outside of local folk circles or something. When the Civil Wars erupted with their platonic lineup, that always felt a little awkward too. How can you be so intimate in music, but leave it all behind offstage?

Now you’re seeing performing couples much more often, and not only is it beyond being a faux pas, it’s put forth some of the most enriching roots music over the last few years. Shovels & Rope, Brennen Leigh and Noel McKay, Kelly Willis and Bruce Robison, and Andrew Marlin and Emily Frantz of Mandolin Orange are examples of romantic couples that are able to bring a joy and intimacy to music that only a couple can.

Yep Rock might seem like an unlikely home for a folky, bluegrass-like singing duo, but a lot about Mandolin Orange is unlikely and unique—that’s how they’ve been able to nestle into this vacant space where there once used to be many Appalachian acts made of couples and families who were plucked off their back porches and placed in front of recording machines to become a form of entertainment for others. That’s how Mandolin Orange makes happy ears for so many roots listeners, from folk and bluegrass fans, to traditional country listeners. 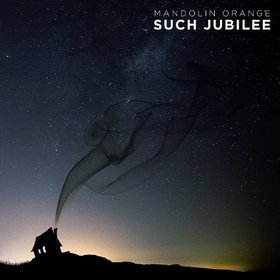 Such Jubilee is delivered as the duo rides the momentum of their 2013 gem This Side of Jordan which saw them go from North Carolina notables to recognized members of the Americana community. Last year they played the Newport Folk Fest and Pickathon to many favorable reviews—the two fests that can codify a roots band’s stature in the musicscape.

On the surface one might think there’s not enough here to hold the attention of listeners with just a two-piece ensemble and a single mic placed between them. But the genius of Mandolin Orange is in the subtle but intelligent way they compose their tunes, and the tenderness and care with which it is all delivered. It’s quiet, it’s careful and calculated, but it’s not eepish or hipsterish by being too lilting or stylized as you can sometimes find with duos. It’s also not too technical like some progressive bluegrass can go. Mandolin Orange has its own little crevice, and in that crevice these enchanting melodies thrive and these harmonies blend expertly, enhanced by these slight but important chord changes that create curiosity in the music without confusing the ear.

Even when the story might turn a little dark, like in the song “Rounder,” or Such Jubilee‘s most expressive moment “Blue Ruin,” the underlying love and hearth-like feel coats this music with an earthen glow like the light of a humble chimney stack. Like old folk and primitive country, thoughts of mortality are always near, but so is a deep appreciation for life. This is music to bask in the texture of.

As a two-piece duo that isn’t prone to veering too much off their path or putting any acrobatics into their music to gain attention, there will always be a certain capacity to the crowd it will draw. But Such Jubilee adds to the sweet little legacy of music that doesn’t just set heads to bobbing and limbs twitching, but fills the spirit with a light that glows long after the music ceases.

Preview & Purchase Tracks from Such Jubilee