Scott McDougall from Portland, OR might be the last of the true Romantic-era troubadours: a bardic-like, almost fantasy character that arrives in town with a bass drum on his back and guitar in hand, and sets up at the local pub to sing songs, spin tales, slay lonesome moments, and save the spiritually repressed before whisking out of town like something out of a dream. The puffy beard, the cherubic features, his skill with wit, instrument, and lyric delivered with a wisp of Renaissance flair, he’s like an archetype pulled right out of the glossy illustrations of childhood fable.

Like most of McDougall’s music, A Few Towns More is a travelogue, with cautionary tales of the ill-fated life intermixed. “Come along,” he says, and then takes all of us chumps more weighted down by life’s priorities on his journey spanning both geography and personal exploration.

The album starts off with an evocation of the warmth and fellowship of one of those late-night pub scenes alluded to above called “Coleraine”, where this folk-based one man band gets some help from friends with chants and claps. “Evening Tide” is where McDougall shows off his inner Bob Dylan, in a sweet and slow composition laid out so eloquently it sticks to memory with ease.

McDougall is skilled, but not a superpicker, and he knows how to use this to his advantage. Instrumentals like “Ask That Pretty Girl To Be My Wife” and “Cuttin’ The Grass/ Tom & Willy Go To Town” (I presume about fellow troubadours Tom VandenAvond and Willy “Tea” Taylor) dazzle you with an authenticity that would be lost if they were just some excuse for technical showboating. Instead the speechless wonder of the songs really helps capture the magic of the moments alluded to by their titles. 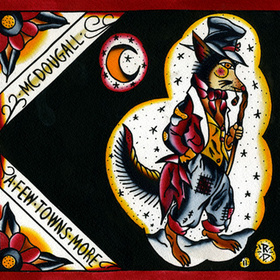 The gospel offering “When God Dips His Love In My Heart” is when McDougall’s skill at singing is shown off, but the epic “The Travels of Frederick Tolls – Part 2” is the standout track of the album; starting off with the Celtic flavor McDougall brings to much of his banjo and guitar playing, and then morphing into a sonic and thematic anthem, encapsulating all of McDougall’s tricks and trades and philosophies into one song with the power to change a life’s perspective.

Always my concern with McDougall is accessibility, a concern I doubt he’s concerned with personally as he traverses the country, singing his songs to any willing audience from paying crowds to porch parties. The album’s send off track, “Ready, Begin” includes one of the most modern-sounding rhythms I’ve heard McDougall employ, and his loud, ringing play on the bass drum in songs like “Cuttin’ The Grass” may suck people in from the simple visceral joy of the rhythm. McDougall uses bass drum not just to keep the beat like many one man bands, but to add a whole new rhythm dimension to the music.

A Few Towns More is a journey worth taking.

(will be available on Amazon, iTunes, CD Baby soon)