One of the greatest values of country music is the various applications in which it can be utilized. Whether helping to mend a broken heart, or making you forget everyday troubles, it’s always there for you. Country music is also one of the few constants in a world of change. The onslaught of technology and the incursion of automation into our lives hasn’t made country music less relevant, it’s made it even more imperative. It’s a stable rock in unsettled moments, and a compass to find your way home.

These are the themes and reminders you will find laced throughout the latest record from Noel McKay and Brennen Leigh—the talented music couple that spent a lengthy period based primarily in Austin, and who like so many Austin-based artists have moved on to more promising opportunities in Nashville. Holding forth at places like Layla’s and The Station Inn, Austin’s loss has been Nashville’s gain, but no matter where they happen to be playing, you can still obtain a copy of McKay & Leigh and get lost in the warm nostalgia of their old time string music which is like a harbor for fellow lost souls who wish things could be a little bit more like they once were.

The foreign feelings of interfacing with the modern world is what you’ll find harped about in the record’s opening songs, including “Analog” written by Brennen Leigh, but perhaps recognizable from when Whitney Rose first recorded it back in 2017. This leads into “Obsolete” penned by Noel McKay with Drew Kennedy. Both songs canonize those old country souls who can’t quite fit into a world of 1’s and 0’s, like so many of those who gravitate to true country music for the feelings of familiarity. The funny and smart turns of phrase in Brennen’s “Steam Thrashers Reunion” almost make you want to travel to such an event in some forgotten portion of the Midwest, and the beautifully-written and stirring “Hundred Year Old Farmhouse” might be the best of the lot and feels like a song begging to be recorded by a bigger name. 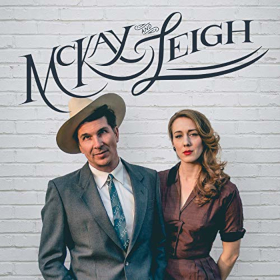 But as much as things changing can bring sorrow to the heart, others are more constant. “Are You Still Taking Them Pills” penned by McKay & Leigh could have been written and recorded in the 30’s, 50’s, or the 70’s, yet might be the most relevant today. First recorded by Sunny Sweeney for her 2017 record Trophy, it underscores how songs from this pairing are still potent enough to resonate wide with audiences in the modern era. Lee Ann Womack, Charley Crockett, and many others have also covered Brennen Leigh songs, and McKay has become a well-respected co-writer as well, speaking to the kind of admiration these two receive among their country music songwriting peers.

The sound of McKay & Leigh will find wide appeal among true country fans, but it centers more towards old-time and bluegrass compared to modern versions of old school country. There’s no drums here, and the sounds are all acoustic, and both Noel McKay and Brennen Leigh are excellent musicians beyond their songwriting chops. But don’t consider this as some incarnation of modern bluegrass. The style of the music is more similar to pre-Hank country, like Roy Acuff and such, where quick wit, folksy observations, and nostalgia are centerpieces to the mood and setting.

McKay & Leigh songs may have been covered by others, but there’s nothing keeping this duo from finding their own share of the bright spotlight. Both are excellent singers and fun performers. Perhaps the thing holding them back the most is their insistence on not letting slick marketing precede their music, and heeding their own lessons of keeping things simple, humble, and organic. McKay & Leigh was released with virtually no notice or fanfare. You had to stumble upon it to find it. But if you did or have, you’ve been handsomely rewarded.

Change is inevitable, and so is the ever-present speeding up of time. But that doesn’t mean you have to succumb to it fully. Taking the time to slow down and savor life and it’s little moments is what McKay & Leigh reminds you to do, while conveying lessons that will always be applicable no matter the decade or century.