Who knows what chemical equations and algorithmic anomalies go into deciding what bands and artists launch into the stratosphere strait out of their first few practice sessions and opening slots, and which ones are destined to slag it out on a slow build spending umpteen hours in a smelly tour van. All I know is I’ve seen Mike and the Moonpies get name checked by Sturgill Simpson in front of a sold out crowd of thousands, and open for the Turnpike Troubadours on numerous occasions, and never did their music strike me as second class.

Mike and the Moonpies are hard to slot in a music scene if you’re into those sort of things, or maybe the better way to put it is they belong to all and are loved by many. You can consider them an Austin country band if you want, playing legendary spaces like The Continental Club and The White Horse on regular occasions. Or consider them a dance hall band who can show up and play for four hours, belting out classic covers, requests, and sliding a healthy dose of their originals in there too while hardcore two-steppers follow them all around town wherever they play. Or consider them part of the whole Texas country/Red Dirt thing, regularly showing up at shows and fests that cater to a world that rubs elbows with the distinctly Austin music crowd and the dance hall scene, but is still different. But as far as the Moonpies are concerned, they fit into any occasion and don’t miss a beat.

Fronted by songwriter Mike Harmeier, the six-piece Moonpies give up nothing to their Austin-based cohorts in songwriting, instrumentation, or performance, and may have just released the album to prove this to the rest of the world beyond the local Austin hangs and dance halls. The mockingbird, known for its a ability to mimic the calls of other birds, is the State Bird of Texas, and a metaphor for Mike Harmeier’s vision to make this new album a reinterpretation of the music he encountered growing up. 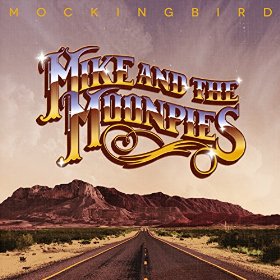 “My grandpa passed when I was only 7, so I have very few memories of our time together, but the ones I do have are very vivid,” Harmeier says. “I spent my afternoons as a kid, drinking sprite at the bar with my grandpa and playing songs on the jukebox – Randy Travis, George Strait, Clint Black, The Allman Brothers, The Marshall Tucker Band, Bob Seger, stuff like that. I wanted this record to sound like that jukebox.”

And it does, with strong songwriting, traditional country textures, and classic rock sensibilities. But everything touched by the Moonpies is destined to be drenched with the distinct vibe of a Texas dance hall, giving it extra character and vintage panache. Mike and the Moonpies elect to carry not just a full time steel guitar, but a keys player too, so each six-piece composition is full flavored.

But all great music starts with the songwriting, and so does Mockingbird. Just because you start off building a song so that dancers can two step, shuffle, or waltz to it without searching for the one, it doesn’t mean it can’t convey a great story, or include a sentiment that moves the spirit along with the body. These aren’t sappy love stories or reminiscent clichÃ©s. Symbolized by the sweet songs of a bird or not, Mockingbird conveys some serious heartbreak, originality, and songs like “I Don’t Love You,” “Never Leaving Texas,” and “South First Blvd” evidence songwriting on a top scale, no matter if the Moonpies are have been more likely to be featured in opening slots on national tours in the past.

Meanwhile “Smoke ‘Em If You Got ‘Em,” “Say It Simply,” and “Song In Here” have that warm Texas country feeling not found east of the Sabine River, but enjoyed by country fans all around the country and world.

While many of the most successful artists in the country realm are making a mockery of the traditions and sounds, Mike and the Moonpies are singing their praises, and the rest of us should be singing the praises of Mockingbird as one of the strongest authentic country efforts released this year.

Purchase on CD or Vinyl from Lone Star Music