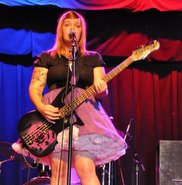 Nellie Wilson before Not This Time was, let’s just say…notorious.

Her act consisted of dressing up in billowing fru-fru square dance novelty dresses, backed by a Western-dudded cowboy band called the Hellbound Honeys (they were all male, that was the punch line), and along with Nellie’s doe-like eyes, angelic voice, and cherubic features, made you believe you were in store for a kid friendly Howdy Doody-style neo-traditional country show. And you were, it was just injected with the most raunchy, gratuitous, sexually-charged lyrics you can imagine coming from the country music format; songs whose mere titles are too lascivious to be appropriate to print.

It was a great bit, but it was a bit nonetheless. It’s not that the impressive voice, the use of wit, and solid country instincts were still not evident in Nellie Wilson 1.0, but in no way were you expecting the level of depth, composition, artistry, and just downright immediate and long-lasting appeal for the songs she slays the audience with in Not This Time. Nellie Wilson shocks the world, and puts out one of the best, and most intelligent country music works in 2013 so far.

Not This Time features a stripped down sound, but not from necessity or sloth. You can tell by the breadth of composition and the use of textures in this album, this is the way Nellie wanted it. She wanted this to be about her songs and stories, and the instrumentation rises to compliment this approach. Nellie is known for playing bass guitar live, but she was wise to leave all the studio performances to personnel that could bring her vision to these songs. Though not one song feels like it has a full band compliment, each song feels fleshed out perfectly as fiddle, lap steel, banjo, and piano all make appearances when the songs call for them. 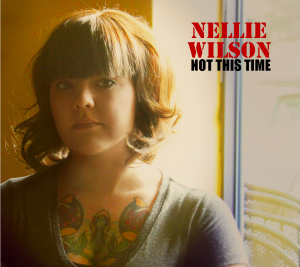 Where Nellie rises and really makes Not This Time a remarkable work is in her vocal performances and writing. The best song on the album might be the opening, minute-long “The Town Fool.” Such intelligence from Nellie to know to end this song leaving the ear craving more and the moral fresh on the brain. “A Noose And A Knife” is a master stroke of songwriting brilliance; a dark song with the most perfect production for the mood. “Hung Up” is the album’s hit. With its infectious chorus you’ll catch yourself singing along. Even songs like “Cruel Jim” that feel like maybe they were holdovers from Nellie’s previous incarnation slide right into this album because the piano is so tasteful, the slap on the upright bass is so perfect, and the fiddle is so sublime.

Nellie Wilson’s voice is so light and fluffy and warm, it becomes the centerpiece of Not This Time. Some may be a little turned off on how she hangs in the high register in songs like “Suicide Kiss,” but her tone has such a supple quality, it’s hard to not find it growing on you.

Nellie Wilson started in music in her family’s band at age 12. During her Hellbound Honey days, when underground country bands would roll through her home town of Madison, WI, Nellie and the Honeys would regularly open and play songs like Loretta Lynn’s  “Fist City.” So maybe we shouldn’t be so surprised she had this in her. And let’s not gloss over that this album, though with its dark and folky moments, is a very country-flavored work.

If Not This Time had originated from some big label or some established name, I probably would have awarded it just a shade under a perfect grade. But knowing the Nellie Wilson story, and listening to this album, you can tell that Nellie fought for this music and really pushed herself to put all of her resolve in making an album that was a true refection of her talent, her instincts, and her abilities. Not This Time feels like a victory, with the spoils being bestowed to the listener’s ears. She pushed herself, didn’t settle, and at a time when underground country needed a landmark album and someone to step up with artistic focus and a fresh direction, Nellie Wilson delivered. Big time.

Not This Time will be released March 5th. You Can Pre-Order Here.