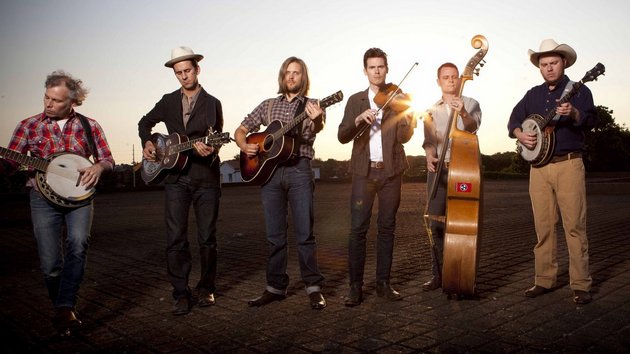 Old Crow Medicine Show’s new album Remedy is the first album the string band has released since officially minting a #1 song in the form of Darius Rucker’s take on “Wagon Wheel”, and the first as the freshest members of the prestigious Grand Ole Opry. 2013 was a big year for the buskers, and the band has gone from riding praise from Doc Watson and the kind mentoring from David Rawlings, to entering some of the highest, and most regarded circles in the alternative country world. As a band that has achieved top industry recognition without compromising who they are, they have enough mustard to rub elbows with artists like Lucinda Williams and Rodney Crowell now, yet the vitality to feel like even better years could still be ahead.

As much as some independent music fans might want to shake their fists at Hootie, or cup their hands over their ears when “Wagon Wheel” comes on, or correct you when you attribute the song to Old Crow without mention that Bob Dylan had a hand in the track too, the simple fact is Old Crow Medicine Show’s “Wagon Wheel” has now become an American music standard in an era when music standards no longer exist. And along with this accolade, they’ve become one of the first traditional-oriented outfits to join the Opry in recent memory. No matter the unpleasantness in the mainstream overall, Old Crow Medicine Show has been responsible for a few promising chutes of life springing from the creatively-barren landscape, while still maintaining their underdog charm and independent spirit.

The one price Old Crow pays for the loyalty to themselves is that the range of expression as a busking band is limited. Maybe they can take a few stabs at some deeper material that shows off their songwriting side, but veer too far away from the history of the band and it could result in sneers. Since this is the case, most every Old Crow album lays out in a similar manner. You have your wild-eyed elbow swinging hoedown songs, your few moments of sedated songwriting material, and Medicine Show always seems to work in a song or two about the troops and other social issues, antiquated just right to fit their old-school style. This has made any new Old Crow project somewhat predictable from an approach standpoint. At least, this is what the critic inside me says. But the music fan inside me after a few rounds through this album can’t help but to feel the infectious joy embedded in these tracks, the humorous turns of language, and the fiddle burns that instinctively get you off your feet. It’s a tried and true formula for Old Crow Medicine Show because it works, and sends the spirit reeling. 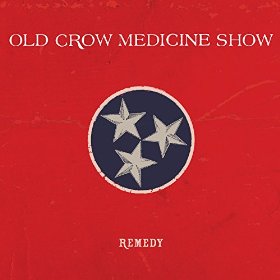 The big press release story surrounding Remedy has been that Old Crow and Bob Dylan have collaborated once again. “Sweet Amarillo” constitutes the album’s first single and video, and as much as it seems like a gimmick to go back to the same well “Wagon Wheel” was drawn from, “Sweet Amarillo” is quite fetching, and may end up being the album’s most memorable track. Another tune called “Mean Enough World” works very much in the style of an old Dylan song, and combined with the speed and offbeat approach of Old Crow, it results in a track that shows off all the band’s best attributes.

Another cool track is “Doc’s Day”, referring back to the band’s earliest incarnation when Doc Watson discovered them and helped set the string band on the successful path they’re enjoying today.

Overall if this album has a theme or a muse, then the Volunteer State would be it. The Tennessee flag on the front cover was no happenstance. Many string bands like Old Crow who show up in Music City end up with Nashville in their rear view, a middle finger out the window, and their Tennessee flags burning. But as discussed above, the biz has been quite favorable to Old Crow, especially for the last little while. Almost as if to pay homage, they canonize many of the features of Tennessee and Nashville in the songs “O Cumberland River” and “Tennessee Bound”. Other songs not necessarily about Tennessee on the surface—like the somber “Dearly Departed Friend” about a fallen soldier that references Tennessee beating Georgia in a college football game—still hold Tennessee as an underlying setting.

Though I’m not sure how much the world is helped by some of their silly songs like “8 Dogs, 8 Banjos”, you can’t help but get swept up in the enjoyment of “Brushy Mountain Conjugal Visit” or “Shit Creek.” The album concludes in a “Seven Bridges Road” moment for the seven piece when they perform the sorrow-filled “The Warden” in stacked harmony. It may not be any “Wagon Wheel” in moneymaking muscle, but “The Warden” performance rivals any other of Old Crow’s recorded tracks.

Somewhat predictable, but very enjoyable, Old Crow Medicine Show’s Remedy continues their reign as America’s preeminent string band, while ushering in a new era of success and recognition that will see the band go down in history as an important influence.