When it comes to the obscure artist from Pennsylvania that works under the name Olds Sleeper (among others), you get a sense that at any moment, his music could turn iconic, almost like a Daniel Johnston storyline, where even though he continues to remain obscure amongst the general public, amongst a microburst of important or influential artists, he could become a legend.

The fact that he’s just some weird guy, hunkered down in a walk-in closet with a 4-track or something, who plays all his own instruments and does all his own recordings, rarely plays out live, and puts out albums at a 4-per year clip and makes them all cheap or free, doesn’t diminish from one’s ability to take him seriously, it adds to his mystique. Sure, there’s tons of armchair musicians out there balancing studio time in their basement between a bad job and honey-do’s, but they rarely, if ever have the level of substance, heart, and dedication that Olds Sleeper does.

After hearing his music here and there for a while, the first album of his I sat down to seriously review was I Will Follow You To Jail that he released in late June. Since then he’s released two more albums. Yes, he is prolific if nothing else, and this necessities a unique set of parameters of how his music should be listened to and taken. Honestly, the album between I Will Follow You To Jail and New Year’s Poem called Plainspoken, I had some issues getting in to. It had it’s moments and there’s a few songs on there I think are great, but it was almost like Olds doing an impression of himself. Not a bad impression necessarily, it just felt like the music was being forced instead of flowing, like it was served before being fully cooked. 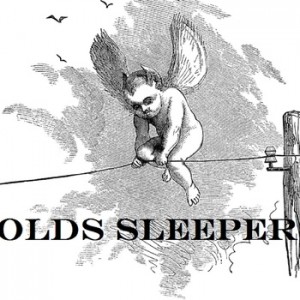 Olds would probably laugh off this criticism, and all criticism of art as a banal act and ignoble. As a critic, that’s one of the reasons he intrigues me. Olds Sleeper releases his music on some sort of schedule that has to do with solstices or changes of seasons maybe? I honestly don’t know and I don’t want to know; I just want to know that there is a system because again it adds to his mythos.

Old’s New Year’s Poem opens up a new chapter in his music, and name’s his most complete album yet; at least of the ones I’ve heard. He does a great job paying attention to the album concept. There’s a great balance between his balls-out fuzz jams and heart-straining ballads, and a good flow from stem to stern. It starts off by reeling you in with an unrelenting wave of visceral colors, as the opening track “Found” washes over you in a sea of filthy guitar tones and Afro field chants.

This deposits you into “Walk With Me,” where the pounding rhythm and easily-enjoyable morbid simplicity of the song is enough to inspire hip-injuring air guitar moves from the most Stoic among us. His use of chord conflict and resolution, though predictable and cheap, is nonetheless effective, and the out-of-rhythm tambourine at the end of the song is one of those little extra touches that marks an Olds song, and elevates his artistic ear from good to great.

Then Olds tucks his shirt in so to speak, and gets serious with the title track “New Year’s Poem” and one of the best songs Olds has possibly ever penned from a lyrical standpoint in “Born to Lose”. The way the song knows when to end, and the way Olds tries to eek out the “…to lose” lyric outside of his vocal range allows this composition to burrow into your soul.

I could go on describing all 14 tracks with this great detail, but then we’d be here all damn day. So let me just say this album doesn’t let up one inch from there; the riches keep coming. In fact along that train of thought, for New Year’s Poem, Olds asked folks to pen a 55-word review for it. Every Olds release seems to be accompanied by a little extra curricular something, a set of images you can print out and patch together into a poster, or something along those lines. Unfortunately brevity was never a seat this blow hard music blogger could ever fit in, but like anything that good poetry comes from, New Year’s Poem is inspiring.

And what’s even better is that this album is free. That’s right. No email addys or urine samples needed, just get your ass over there and get it. Because that’s how Olds Sleeper rolls.

Listen to it in full below: