Album Review – Olds Sleeper’s ‘I Will Follow You to Jail’

Unless you frequent a few small music circles in the underground world, you may have never heard of the artist Olds Sleeper, but that doesn’t diminish the argument one can make for him being one of the best songwriters of our generation.

Of course, saying anyone is the “best” of anything is always disputable, but numbers are not, and by the numbers, Olds is indisputably one of the most prolific songwriters out there, especially taking into consideration he’s also the singer, picker, performer, engineer, publicist, and label.

Some songwriters, trying to explain the dedicated nature of songwriting, say that songs are like children. Well if that is the case, Olds Sleeper has shagged more trim than an NFL wide receiver, and has baby mammas and kiddos with his nose spread all over town like a bad rash. If you don’t like an Olds Sleeper song or project, just wait a month or two; the next one will be coming around soon enough. It’s to a point where Olds’ proliferation is an element of the music itself. Good songs are elevated to greatness by the wanton “write it, record it, and move on” nature he approaches music with. And then what happens with these songs? They’re disseminated through email or on the internet, cheap or free. Come and get ’em. 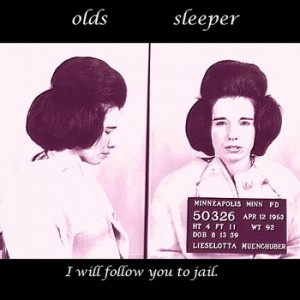 It is said the systemically-morose life the modern American male leads is one of quiet desperation. Olds gives that quiet desperation a voice, and a vehicle in I Will Follow You To Jail. Towns and women, and unresolvable circumstances and sins paint a bitingly authentic picture of a man at wit’s end. It is a soundtrack for the American anti-hero, making you fall in love with the villain, cheer on bad male middle-aged behavior, and see the beauty in otherwise ugly things. . . . . and then Olds plays a bad ass banjo instrumental.

And despite Olds’ seemingly-fleeting attention for his songs, every one of them has some element of brilliance; a quality other songwriters might labor on a song for months trying to obtain or capture, to no avail. But with Olds, this element of brilliance is where a song must begin. And then like with all great albums, there is a universal theme bridging all the songs together.

The music is endearingly sloppy, though at no point rushed, incomplete, or careless. There’s even an attention to detail, in ambient layers he adds to the music, and the subtle inflections in his voice. Olds’ lyrics imbibe an awesome sense of character that help personalize the truths of his message to where it sticks to your bones, all while making sure there’s humor and simple appeal at the song’s core first. The authenticity goes without saying. His use of tone, instrumentation, and effects is always appropriate. Though another spellbinding element to Olds Sleeper is his diversity of style (I’ve heard him do things that could be characterized as techno or industrial) I will Follow You To Jail is solidly a dirty roots-based album.

The desperate mood is set with “If I Had A Bottle” and evolves to self-righteousness bravado in one of the albums standout tracks “I’m The Devil”. The other must have tracks are the heart-wrenchingly real “This Town” and the disturbingly-funny and soulful “(Buddy Holly) Paranoia Blues”. These are balanced by two good love songs “Should Have Turned” and “Much Too Smart”, and three solid banjo tracks. And what would you pay for all of this? Well, the asking price is nothing, so you now have no excuse to not go an check Olds Sleeper out for yourself. All I ask is that if you like it, you tell a friend.