One of the most difficult undertakings for a music reviewer is to share your opinion on a record that you ultimately favor more than fault, but happen to have more critical observations for than positive ones, especially when public sentiment is tilting so favorably towards it already. It just becomes a recipe for misunderstanding. Such is the case with Sons of Fathers member turned solo artist Paul Cauthen’s new album My Gospel—a record that will likely make many of the lists for the best albums of the year as such things begin to come into sharper focus when clocks fall back and Thanksgiving looms.

Undoubtedly, My Gospel is deserving of praise. After a decent hiatus proceeding Paul Cauthen’s exit from Sons of Fathers, he spent time hunkering down in Austin, TX until in a moment of desperation, he finally discovered his voice and calling in music, and set out to put his vision on tape with My Gospel. The record is a wide, sweeping work for just 11 tracks, taking listeners on a roller coaster ride of emotions in a very robust effort. My Gospel gets the heart pounding and the mind soaring in the way good music is supposed to.

The problem with My Gospel is when you go from calling it good to great. Some of what’s going on here just doesn’t hold up to scrutiny when you peel back the layers of production and take stock of what is left. The billowy, overproduced nature of the project itself will be a polarizing element for some listeners—things like the ever-present use of the McCrary Sisters on tracks, and the heavy chorus effect slathered on Cauthen’s vocals. It is easy to get swept up in, and fills some otherwise sizable holes in the music, but this album has more ‘oohs’ and ‘ahhs’ than a doctor’s office hears during cold season.

The songwriting of My Gospel, which many are championing as the best asset of the album, doesn’t really hold up when you deconstruct it to its fundamental parts. Many of these songs ostensibly only have one or two verses, and otherwise rely on these elongated choruses with very repetitive lyrics—so repetitive some are just a couple of words repeated over and over instead of a proper lyrical phrase. 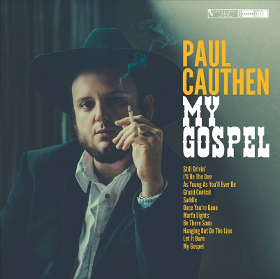 I was noticing this lack of depth in the songwriting while listening to the album for the first time when I came to the next to last song “Let It Burn.” Cauthen spends the second half of the song oversinging the phrase “let it burn” to a count of 20 turns. Doing this might not be worth taking offense over if it was just one or two of the songs, but “Saddle,” “Marfa Lights,” “Still Drivin’,” “Once You’re Gone,” and to an extent “I’ll Be The One” employ this same repetitive trick. Granted, it’s fetching to the ear the first few times you listen, but ultimately that lack of dept could erode appeal over time.

Also, Paul Cauthen seems inclined to add an unnecessary affectation to his voice in many of these songs. His natural baritone is his greatest attribute, but at times it sounds like he’s trying to be the country music version of Meatloaf, inflecting these unnecessary and polarizing flourishes of over-expressiveness that makes it sound like two separate singers are performing on the same track—one with the natural voice of Cauthen, and another trying to sound like the Righteous Brothers, adding a strike against the authenticity of this project.

It’s also fair to ask just how country My Gospel is. Aside from a track or two and certain elements in certain songs like the steel guitar, it’s probably fair to label My Gospel as more of a classic pop album with folk and country influences as opposed to traditional country. In some respects, the album makes some of the same mistakes the Countrypolitan era in country music did—relying too much on layers of production as opposed to the fundamental elements of song and performance.

All this is said not to spit out My Gospel as an unsavory effort only appropriate for the discount bin. It’s just probably not the type of singular record some are lauding it as, and time may bear this out. It needed a little bit more effort in the substance realm, and to roll back some of the billowy, grandiose production. Even his story behind the album seems a little bit self-absorbed, despite it undoubtedly being true. “I dared Him,” Cauthen says, recalling his desperate challenge to God that resulted in the album. “I said, ‘Use me. I’ll be a rag doll. Just put me out there, let’s go. I dare you.’”

My Gospel is ultimately burdened by the styling. Even the front cover, though probably not the favorite of the American Cancer Society, is what is impressing upon many that they’re about to behold a brand new country music classic. It’s a good cover, but a little too infatuated with itself just like this record.

The saving grace of My Gospel is that the album passes the listening test—meaning when you take all of the pointy-nosed criticism out of the mix, it’s just plain enjoyable to listen to, and probably more enjoyable than many of the records that would score higher for critical merit. Part of the reason for this is because it’s a pop album, however classic it might feel. Cauthen is crafty in how he makes his choruses rise and allows the songs to crescendo toward the end. And this in itself is not easy, and requires an element of craftsmanship many songwriters blessed with a loquacious poetic voice don’t possess.

Nor is the songwriting something to completely write off. The sentiments of “You’re As Young As You’ll Ever Be” and “Once You’re Gone” are great. The ending title track feels very personal to Paul. One of the reasons it’s easy to find so much at fault with My Gospel is because it’s worth criticizing, which is a better outcome than the opposite.

The album really cries for your attention, and those cries are hard not to heed. Cauthen has done something here that is also incredibly unique, and will find favorable audiences beyond Americana and classic country. He is clearly a talent of a formidable caliber, and it makes you wonder what he’s capable of with more attention paid to the concerns one can find in My Gospel. That is why they’re worth pointing out.