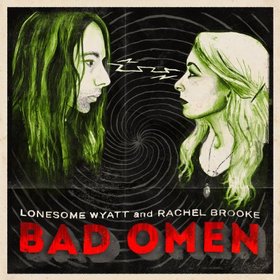 Like an ancient family photo happened upon in an old box in an attic, with gaunt faces from the late 1800’s all Stoic and staring forlorn into the distance with blurry eyes from being unable to sit still as the exposure took, Bad Omen leaves you with a foreboding feeling well after you’ve left its presence simply from the knowledge that such a haunting thing exists. It unsettles you, but in an way you strangely crave from the juices it stirs.

Lonesome Wyatt is the audio wizard of the malignant duo Those Poor Bastards, and one of the founding fathers of the modern era of Gothic country. Rachel Brooks is the Queen of Underground Country turned Americana contemporary whose timeless voice has been borrowed for many a recording beyond her own formidable body of work. Together they formed a partnership and released the precursor to Bad Omen called A Bitter Harvest in 2009. Ever since, time has only validated the mastery behind the collaboration, and that collection of songs has since gone on to be considered a hallowed work of the golden era of the country underground, rivaled by few as a top representative of the rabid creativity of that time.

Some artists come together in collaboration because they want to. Others seem so destined that even headstrong determination couldn’t keep them apart. The styles of Rachel Brooke and Lonesome Wyatt aren’t as ghastly similar as they are exquisitely complimentary. It’s Rachel’s voice, and how Lonesome knows exactly what to do with it. It’s how they both have dissected the bones of primitive country from projects like The Louvin Brothers, The Carter Family, and Hank Williams, and then augmented those desperate singers with more contemporary influences and their own weary spirits.

Deciding to make a sibling for A Bitter Harvest is sort of like deciding to start another troika of Star Wars movies: Go into it knowing you’re testing fate by messing with near perfection. But six years is a long time to let material build up and be battle tested, and allow the desire by the artists to ripen into high inspiration. Just as the first album seemed like it could never match the expectations and eventually bettered them, Bad Omen hurdles benchmarks to surpass expectations.

Granted, this is not your everyday listening fare, and a familiarity with Rachel Brooke, Lonesome Wyatt, and the approach of Gothic country is important, if not required for the listening experience to reach the full fulfillment level, if not just for the music to be fully understood. This is an artistic expression of the classic American experience, not rhythm candy or catchy grooves, though with the right calibrations of the mind, you will find this music nothing short of overwhelmingly immersive in a way most music beyond classical or jam band epics could never come close to achieving. Bad Omen will make you feel moods you’ve forgotten in the recesses of your memory, if you’ve ever felt them before.

Don’t think all is dark and dreary though. Rachel Brooke especially adds a dollop of appreciation for Brian Wilson’s Beach Boys in the approach to the harmonics of melodies, and the sweeping expanse of choruses that convey a sweetness of tone to tickle a wide array of your listening senses, aided by Lonesome Wyatt’s mastery of wetness on a recording. Some choruses on this record create spaces and expanses that test the very limits of distance in the recorded context, while Lonesome Wyatt himself evidences spectacular range and mood in his belly moans and vocal ballads.

Talking too much of songs specifically might run the risk of picking favorites from what is a solid effort from cover to cover, but the run of “If The Beasts Should Hunt Us,” “Miles and Miles,” and “Dance With Me” best exemplify the virtues complimented above. Carrying over a theme from Those Poor Bastards’ last album Vicious Losers, there’s a lot of pondering on the aging process in Bad Omen, and possibly the best written song is the conclusive “What Happens to Our Love?”

Aside from some warnings about feyness, this album comes very recommended, and might set the standard for country music artistry in 2015 after all applicants have been heard. Rachel Brooke and Lonesome Wyatt uphold the standards they set with their first record, while evidencing growth as part of the new effort as well.

(NOTE: A Bitter Harvest has also been re-issued on vinyl in limited quantities as part of the Bad Omen release).