Album Review – Rachel Brooke’s “Down In The Barnyard”

I love this album. I think it’s superb. I am astounded by how wholly original the thing is, how successful the theme and vision were implemented and seen through, that it brought out Rachel’s subtly brilliant songwriting, and most importantly, did not suffocate her most important asset: her timeless, flawless voice.

This album takes some getting used to. It’s not one you peel the plastic off and appreciate at its greatest apex the first time through. Sometimes those albums can burn out quickly anyway. Not a criticism, but a concern is that because of the originality of this album, some will not understand it. This album is not “fun”. It’s not meant to be. Some albums or songs I tell people they really must concentrate and listen to to appreciate fully. This album you must give time, and it will pay off. 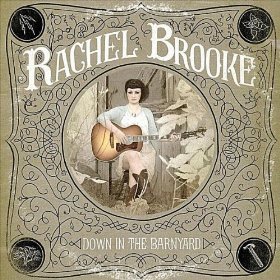 We haven’t seen or heard a country album like this in quite some time. When you boil it down, it is still neo-traditional country, but usually those albums take the big obvious points of classic country–steel guitar, yodel, lyrics about drinking etc–and miss the subtleties. This one revels in the subtleties. There’s no aping here. You can tell Rachel has studied many modes of classic country, not just some. I hear Charlie Louvin, not just Hank Williams. I hear The Carter Family, not just Johnny Cash. And the themes are not just from the 1950’s, but the 1850’s as well. There’s no big branches for you to grab on to and say, “Hell yeah, this is the kind of country I like!” but the originality embellishes the album to such a more magnanimous degree.

It starts off with a 500-word story song “The Barnyard”, that like some of the other songs on this album, follows a murder-ballad mold, but with such bold depth and originality that they are hardly recognizable as such. To start an album out with such a long, wordy song is bold in itself. Rachel Brooke may be as beautiful as a bonnet, but she’s got balls the size of church bells. This song is almost like it is a test, a sign to ward off the faint of heart: if you want beer-chugging hell raising songs, or sappy sonnets, keep moving.

And I hear Charlie Louvin here with the close harmonies and the simple songwriting. Rachel is no Townes Van Zandt, and she isn’t trying to be. Instead she explores using simplicity intertwined with eternal themes, which was how the old-time music that formed the roots of country worked. No single line is going to put a lump in your throat, but the whole song with put one in your heart.

There are some outright hits on this album. “How Cold”, “City of Shame” and “Please Give Me A Reason” for sure. Long-time fans of Rachel will be familiar with the first two. She mixed in some distant, lilting fiddles into “City of Shame” that really take this song from excellent to instant classic. “Please Give Me A Reason” strips it all back to guitar and vocals, getting everything out of the way for Rachel’s voice and lyrics to shine. 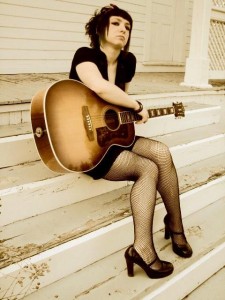 Rachel’s voice is one in a million. It’s all natural. She did not develop a unique singing style to delineate her from the masses, like is so common with over-singing songbirds these days. She purified her own voice, with no facade or embellishment. It is so wondrous because it is adorable and seemingly innocent, yet at the same time aged like a ghost, haunting, and filled to utmost capacity with pain. Then she hones it with very attentive control and timing; this is really what is at the heart of her voice. “Please Give Me A Reason” is the perfect example of this control. The way her cadence and yodel punch at the right time makes the words shoot straight to your gut, and this song possesses some of the most original song lyrics I’ve heard in a long time. It is a masterpiece.

“Me And Rose Connelly” and “Meet Me By The Apple Tree” again emphasize the old-time themes and song structures that with this album, will become Rachel’s signature. So does “The Legend Of Morrow Road”, but this composition takes it to a whole other level. As a 7-minute epic that encapsulates all the accolades I have heretofore bestowed on Rachel, it is a chilling account of a girl who falls in love with a married man, gets pregnant in a time when that met the doom for a young woman’s life, and morphs into a ghost story.

Warts? There’s a few. “Lonesome For You” is a pretty song, it’s cute the way Rachel sings the “lonesome for you” lyric, but being the only true cover song, and the drums being clangy and a little disruptive, I guess I just don’t see the point. Really I’m not a fan of much of the drum work on this album, and just for full disclosure, Rachel is a drummer too, and responsible for it. Rachel’s voice shines again on “Must Be Somethin’ In The Water”, but the crash boom banging and guitar tone at the end drowns out what makes her shine, irrespective of any need to shake up arrangements of songs for variety.

Your ear might pick up on quite a bit of consecutive yodeling on “Gather And Hear” and “Mean Kind of Blues”, but this is simple song order stuff, and forgivable, and made up for admirably by the proceeding “I Don’t Worry” with amazing organ and beautiful harmonies from Brooks Robbins, aka “Junk”, aka the man sleeping beside Rachel Brooke that is not me.

Rachel deserves big props for being able to pull off all of the instrumentation and recording on this album by herself. At the same time, I would have liked to hear more outside participation in this project beyond the final track “Don’t Forget Me When I Die”, that features her father on banjo, and a few notable names on harmonies. A devil’s advocate about certain arrangements may have eliminated some of the warts, though all in all, they we very minor, and very few and far between.

Overall this album is excellent. Rachel also wins points for the album artwork, that mimics a 78 record cover with a fabric spine and the wear marks where the vinyl bends the cardboard, allowing the full motif and theme of this album to be realized. It’s one of those albums where the songs and artwork measure greater than the sum of their parts because of the thematic cohesiveness. Hearing it and specifically some of the songs emboldens me to peck away at this keyboard even harder. This is the reason I get up in the morning. These songs must be heard by the wide reaches. I’m a little reluctant at the moment to say just where it fits in my catalog as a far as legacy, because it keeps getting better with every listen, but without question, it is up there with some of the greats of the last few years.

Preview Tracks and Purchase Down In The Baryard

Rachel will also be the guest on Outlaw Radio Chicago this Wednesday on SCM LIVE at 8 PM Central, 6 PM Pacific.