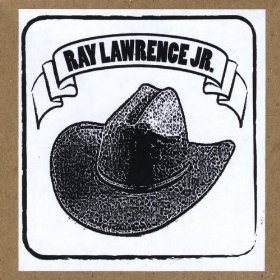 And I’ll even take it step further and say even though I liked the songs entitled “Ray Lawrence Jr.” on Hank3’s album as maybe a bootleg or something you nab off of YouTube, I didn’t think they were worthy of including on a serious release. Frankly, these days I’m apt to look at many Hank3 decisions with cocked head, like a cocker spaniel looks at you when you loudly pass gas. But what the Ray Lawrence/Hank3 tracks did was got us to pay attention to this artist, and after listening to Raw & Unplugged, it is hard to say anything except that Hank3 once again deserves credit for playing pusher for another relatively unknown artist who wholeheartedly deserves the recognition.

As the title of this album implies, this is Arizona-based singer/songwriter Ray Lawrence Jr. with just him and his guitar. The album was quickly put together after Hank3 released Ghost To A Ghost, to meet the demand Hank3’s exposure created. It is in this context you must judge and listen to this album. Some albums are recorded raw and unplugged as a purposeful approach to create a desired aesthetic. This one is done more out of time and necessity.

However you want to look at the approach, this is some of the best true country songwriting I have heard all year. I am floored folks. I’ll be honest with you, knowing the context of this album going in, I didn’t think it had much chance to charm my little music heart, but that is exactly what it did. Ray’s songs are just so true, honest, well-written, and authentic, it makes his adeptness at song craft absolutely undeniable. And screw the fact that there’s no accompanying instruments here, who needs them. The strength of song is enough to make this album accessible despite it’s sparseness. 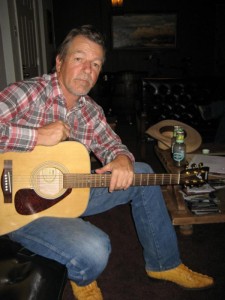 Ray is an example of how songs about truck driving and divorce will never get old in country music, as long as they’re being sung by someone who sings from personal experience, and with heart. Songs like “Check’s In The Mail” and “Just Kick My Ass To Texas” work in that timeless country manner of conveying simple wisdom through wit. “There’s Another Cheatin’ Heart” was my favorite track from the album, from the way Ray uses the simple countryism “off somewhere” to draw you in with it’s authenticity. And songs like “My Hurtin’ Will Be Done” show that Ray isn’t just about engaging lyrics, but also has a great ear at structuring the music around the mood he wishes to convey.

Ray’s guitar playing is great for the solo acoustic context; not just cord strumming, but not over noodling either. Good walks up and down, and the rhythm and cords are always present. And his voice is one of those aged, authentic instruments of song that so many a young man can try and duplicate, but aside from William Elliot Whitmore, can never match. In places the edges of the notes are frayed just so from the years of drink and smoky bars, but there is still a strength to it, and a desert twang that Ray wields with confidence. There is a little David Allan Coe to his vocal delivery.

From Homeless To Hank3: The Story of Ray Lawrence Jr.

I don’t mean to keep going back to the context of Ray’s Hank3 connection, but something I can’t drive home enough is how country this album is. This isn’t some Hellbilly kick or punk meets country as some may assume from seeing Hank3’s name, this is an album you could play for your grandmother, and you know what, she might like it. No hard language, just simple, universal country themes and stories that touch your heart from their authenticity.

Is this album like a “best of” from a songwriter whose been going at it for decades, and put all his top notch material together making a follow up an inevitable letdown? Will Ray exploit this opportunity Hank3 has given him as artists like Lucky Tubb, Bob Wayne, and Those Poor Bastards did before? Time will tell, but what I am hear to tell you right now is Raw & Unplugged is top notch. And as a pure country singer/songwriter album, I highly recommend it.