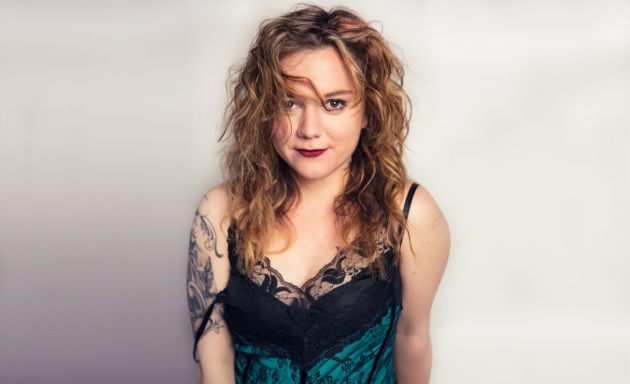 I never really knew what Lydia Loveless looked like until the run up to the release of this album. I’m serious. I had seen plenty of promotional pictures of her, numerous videos of performances, and have even seen her live a number of times. But I had no idea what she looked like.

This may seem like a nominal point to make, or maybe even a shallow one or even somewhat creepy to say about someone who makes their living via audio emanations, and any visual component should be ancillary. What do I even mean that I didn’t know what she looked like? What does that have to do with her music?

Part of the reason I had such difficulty discerning who and what Lydia Loveless was had to do with the fact that she frequently changed her hair, dress, look, etc. But the other part had to do with the fact that she was hiding from all of us. Lydia Loveless didn’t want us to know what Lydia Loveless truly looked like. It was too intimate for her. So she hid from us, in plain sight. And though at times she bore her effervescing moments of self-doubt and loathing fearlessly, and it resulted in some of her best work, and some of the most critically-accepted music in alt-country/Americana in recent years, she kept herself hidden. Only her words and voice was she willing to share. But even then in a slightly guarded manner. 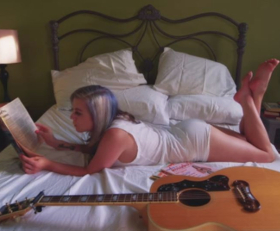 And now Lydia Loveless is starring in a video where she’s in bed in her underwear, inviting the camera into her bedroom, not only symbolically but literally bearing herself to all, showing us who she is not just from confidence, but from not giving a fuck what anyone thinks about her anymore. It’s not that I cared what Lydia Loveless looked like. It’s that I cared why she didn’t want anyone to know. Now, upon the occasion of her fourth album, she finally letting all of us see, and hear, who she truly is. This is the “Real” Lydia Loveless.

And the real Lydia Loveless is not country, alt-country, Americana, or any of that. She is a dark-hued power pop artist with advanced lyricism and a snarl of attitude.

When I saw the article entitled, “The Real and Rowdy Lydia Loveless Is So Over The ‘Alt-Country Songstress Bonanza, ‘” I breathed a sigh of relief. In the article Lydia says, “I guess trying to shed that ‘honky-tonk punk’ outlook everyone has about me. I’m really into pop music, especially power-pop, and I wanted to bring that into the record and I think we successfully did that, finally. It’s trying to shed the one-sidedness of genre-specific descriptions.”

Normally, an artist either declaring or just plain evidencing their abandonment of country music, especially one who has contributed worthy music to the genre in the past, would be grounds for disappointment, or even anger. But in the case of Lydia Loveless, it’s a different story. I’m glad she said she wants to shed the alt-country label, because that’s exactly what she does in Real. But it would have come across as pointed, assholic unfairness coming from me.

That doesn’t mean it doesn’t suck that Loveless has made this declaration, or has decided to move in a decidedly non-country direction with her music. Really, her move away from country is part of a greater narrative that has been one of the biggest stories in independent country in 2016—Bonnie Bishop, Robert Ellis, Elizabeth Cook, possibly the upcoming Jonny Fritz, and freaking Sturgill Simpson. All once promising and fundamental voices in independent country have moved on in recent releases.

It has been a losing proposition for country fans throughout 2016 in Americana. That doesn’t mean any of these efforts are bad. In fact most of them are pretty good. We’re all music fans first, and then our allegiances break down genre lines. But dammit, I like country music. And I like artists like Elizabeth Cook, Sturgill Simpson, and Lydia Loveless. Screw me if I selfishly want them to continue to imbibe more steel guitar than synthesizer in their music.

But with Lydia Loveless, it is a bit of a different story. It’s questionable if she ever deserved to be labeled any more than “alt-country influenced” from the beginning (though the Hank3 attitude was definitely there early). And this is what leads to conflict. I have always appreciated Lydia Loveless when she was being Lydia Loveless. That is how despite a measured but passing grade on her last record Somewhere Else, she went on to win Saving Country Music’s Song of the Year in 2014 for “Everything’s Gone,” which she wholeheartedly deserved. By stripping the composition down, she removed all concerns or questions of genre. 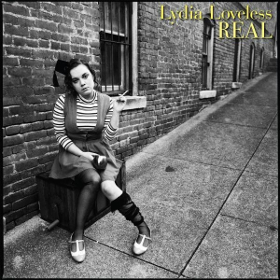 Yet the reason I’ve been so guarded with praise for Lydia Loveless overall was something telling me the day would come when she shed any affiliation with “country.” As I said in my review of her debut record Indestructible Machine, “Just in the last week, I have seen her compared to Loretta Lynn, Kitty Wells, and Patsy Cline. I’ve heard her called the next Neko Case, and a cowpunk princess. Rest assured, I like this album more than I don’t. But as legendary football coach Bill Parcells once said after one decent game by a young, promising quarterback, ‘Put the anointing oil away.'”

An artist identifying Brittney Spears as an influence should not be compared to Loretta Lynn, especially when we’re just one album into her career.

My favorite Lydia Loveless record remains her quick and oft-overlooked EP, Boy Crazy. Why? Because she was being herself. She was bearing her Brittney Spears / Ke$ha fantasy unabashed, and it was fun.

But Real lacks a certain zeal or easy appeal to it that Boy Crazy had, and the enhanced lyricism compared to most power pop makes for a bit of a confused listen in spots. The reason power pop works is because it is easy. But Real is involved, both sonically and lyrically—both assets musically, but a little bit of a burden if you’re just looking to rock out to some juicy rhythms and rake your air guitar along with power chords.

There’s some great songwriting on Real, especially when the Ohio native unleashes her Midwestern angst upon “some shitty Indianapolis band,” or some guy who wants to lock her in a kennel “and then leave for Myrtle Beach at 5.” But, you know, I’m a bigger country fan than I am a power pop fan, so I tend to feel like the appeal of Real strikes me with only a glancing blow as opposed to a dead on haymaker. So I’ll probably cherry picks some tracks and move on.

That’s not meant as a slight to Lydia Loveless, just like none of my previous trepidations about her music have been. Since she’s on Bloodshot Records, and because many “country” and Americana outlets continue to cover her music—like Shooter Jennings and others who will vociferously tell you their music is not country yet will go ahead and take advantage of the media and journalistic infrastructure of country due to their career’s lineage—you feel obligated to voice your opinion. Lydia Loveless can say what she wants, but her lane is Americana, if for not other reason than there is no lane for power pop from a once alt-country girl from Ohio with heartfelt songs.

So if you like Lydia Loveless’s Real, that’s all that matters. Because on this one, there is no half measures, no subterfuge, no misappropriated plaudits. It’s just Lydia. And all that we can ask from artists is to be themselves and to do their best. And on this record, Lydia Loveless has done both.

It just may not be the best listening for all country fans. And that’s okay.