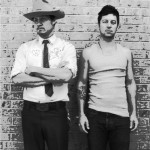 No, there’s not typos in that title.

I once had a friend who named his dog “Brad”. When I asked him why the name “Brad”, he told me because it was the last possible name anyone would ever give a dog. I don’t know if that is the methodology behind the deep blues band Restavrant, or the title of their latest album, Yeah, I Carve Cheetahs, with it’s conversative, almost plaintive tone. But just like Smuckers jelly, don’t worry about the funny name, just shut up and enjoy. And once you experience the wanton, undefinable, and downright violent approach of this band, you will agree only weirdness would serve to define them.

What to call this music? Hell I don’t know. Rootsy garage punk swampy blues rock country…or something. In fact don’t even worry about that crap, just listen to the music. I’ll start off with a word of caution though. I have many positive things to say about this album. One of them is not it’s accessibility. There is nothing mainstream here. What Restravant serves is the manna, the core, the meat of what exists in the “deep blues” underground roots movement that generally blends north Mississippi Hill Country blues with a punk attitude. Nobody may embody this approach with as much abandon as Restavrant. This album is really for the “core” of that fandom, but even from the outside looking in, with a open mind and a true appreciation for music of any kind, you too can be infected by the groove and energy that Restavrant brings. 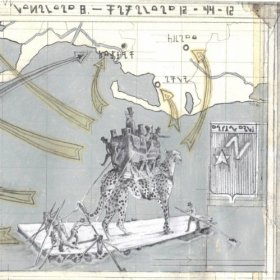 This music comes at you like some crazy berserker dude kicking and swinging nun chucks, or a rooster with razor blades tied to its talons flying at your head. You may not exactly know what’s going on at first, but it certainly will get your heart pumping. Restavrant doesn’t play music for you, they beat you over the head with it. A two piece setup of screaming wierdo dudes originally from Victoria, TX, one armed with a gut-bending guitar and slide, and the other with common truck stop parking lot refuse that he wails on to create audible percussive-like noises. I’m pretty sure their form of expression is considered assault in certain countries. But for those with the right ear and disposition, it hurts so good.

Restavrant strips it all back. All of it. The guitar work, singing, and lyrics have their moments of impressive flourishes, but they’re careful to not be too good, because with this music, it would take away from the experience as a whole. What is important is the energy and groove. This isn’t music you hear, this is music you feel. They rhythms and groove are infectious enough to call tantric. Restavrant’s music works like a cluster of concentric circles, where it comes around and around, and the tension and resolution and anticipation create a dizzying, whirlwind, whirling dervish trance-like effect with the purpose of making the human Will submit to the rhythm and message.

With songs like “Yeah, I Guess”, my personal favorite “Bev D.”, and the epic “Watch Me Drive” with it’s great message, it is hard to not submit to what Troy Murrah and Bev. D of Restavrant are throwing down, however silly it makes you feel or act as you bang your head listening in rush hour traffic, or bounce up and down in your living when nobody’s watching.

One concern I have is that since Restavrant is such a visceral experience, the song’s effectiveness depends a lot on your personal experiences, so some of the songs could be like a joke you don’t get, even when you do get the band in general. My favs from this album may be completely different from someone else’s. And I know this music is supposed to come across as dirty and distorted, but I really feel like just slightly more attention to the production quality, clarifying some of the sounds, making the bass more thumping may elevate the Restavrant experience that much more.

But aside from a few very minor squabbles I have with it, simply put, Restavrant’s Yeah, I Carve Cheetahs is the most viscerally-engaging album I have heard in a long time. So yeah, I think you should get it. Just hide all your breakable shit before you cue it up.