Album Review – Rhiannon Giddens’ “there is no Other”

Hank Williams III once said, “The older you sound, the more punk you’re being.” If that’s the case, then Rhiannon Giddens is the Johnny Rotten of folk music.

The purpose of her latest record, there is no Other, is to trace the lineage of traditional music back so far, the differences in expressions, vocal cadence, rhythm, and mood are almost imperceptible no matter the region of origin, or the influence. What’s most important is these expressions emote a human feeling in notions that are universal, even though sometimes the dialects couldn’t be more different, and their modes may sound fey to many ears. The objective is to use music to illustrate how humanity is more of a collective as opposed to legions of warring tribes as many would lead you to believe. In this effort, there is no Other grandly succeeds, even if those most needing to heed its lessons won’t be inclined to remain attentive, or might miss the point entirely.

A collaborative record with Italian multi-instrumentalist Francesco Turrisi, there is no Other is two adept musicians drawing from deep wells of musical knowledge and instrumental proficiency to offer an involved and moody musical encounter that is both inspiring and informative. This is not country music or even American folk in the traditional sense, though these disciplines are intertwined in this effort just as much as Gospel homages, Gaelic styles, African rhythms, Eastern textures, and even an Italian traditional called “Pizzica di San Vito” sung in its native tongue by Giddens.

Rhiannon Giddens is a powerhouse of swelling talent that is fair to characterize as singular and peerless in our generation. Even if the style of there is no Other‘s opening song “Ten Thousand Voices” doesn’t adhere to your musical sensibilities, it’s hard for the heart to not feel the rich power with which Rhiannon Giddens delivers her message. When gentleness is needed, like in the opening of the song “Trees on the Mountains,” Rhiannon is able to enact this treatment with intimacy, affection, and ease as well. The mere presence of Giddens extols a sort of musical magic and reverence that compels the ear to be attentive. The pulsating and primal rhythms she conjures with Francesco Turrisi on the instrumental “there is no Other” is palpable throughout the primary nervous system, stimulating both mind and limb. 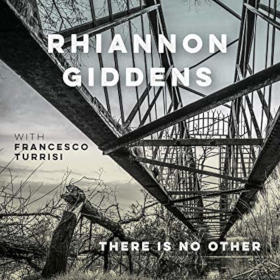 Rhiannon’s rendition of “Wayfaring Stranger” gives something familiar for country listeners to latch onto, as does the lyricism of “Trees on the Mountains” which conveys the common country theme of love betrayed. The reverent and hopeful “He Will See You Through” bores down to the Gospel influence that infers country in equal measures as it does soul and R&B. And perhaps most important, Rhiannon Giddens and Francesco Turrisi figure out how to present all the seemingly disparate influences and mismatched instruments in a surprisingly cohesive manner, with only a few speed bumps impeding your ability to listen cover to cover, and find yourself immersed in this work.

To assign political motives to there is no Other is to wholly misunderstand the album, down to the way the title lacks proper capitalization to emphasize the similarities in the human experience. The effort here is unity, and to deconstruct tribalism and identity politics as opposed to being a party to them, and doing so by not trying to resolve the differences in genre, but by emphasizing the uniqueness in expression. Nonetheless, this hasn’t, and won’t keep some from misdiagnosing this project for their own devices. That’s not to say there isn’t a message here. It’s to say that message is less tethered to judgement or one political alignment, and is more worried about broadening perspectives to tear barriers down between humans, something Rhiannon Giddens has championed throughout her career. It’s a message of hope, and a way forward.

there is no Other is also not meant to be a work of commercial music. Rhiannon Giddens was awarded 2017’s MacArthur Foundation “Genius Grant,” which afforded her a very large six figure sum to pursue her music and other creative pursuits free from consumer concerns. While this is a positive development for Giddens personally, and for those who want to keep her musical endeavors pure, it also puts this music at arms length from the much wider audience it deserves.

The voice and perspective of Rhiannon Giddens is something that culture at large should cherish, and even though it feels a world apart from her efforts on there is no Other, she’s one of the few women who has seen recent success in commercial country, charting a #6 song on radio with Eric Church on “Kill A Word.” She’s also appeared on country’s major award shows multiple times. But there is no Other will do little to spread the joy of Rhiannon’s music beyond the niche realm of Americana. Unlike her 2015 record Tomorrow Is My Turn, or her work with the Grammy-winning Carolina Chocolate Drops, limited to no effort to embed wide appeal for antiquated folk material is employed here. It’s one thing to labor to preserve, which is an important pursuit. It’s another to help spread awareness and appeal for something so it helps support itself.

One of the reasons so many can be sold on the misguided notion that someone like Lil Nas X symbolizes an important moment of integration for country music is because they are perfectly ignorant that an artist like Rhiannon Giddens even exists. Like so many of country and roots music’s African American performers, Giddens is summarily ignored by many of the same popular culture institutions and media entities demanding more diversity, while ironically she and other African American artists are doing more to help preserve the roots of the music compared to their white counterparts.

It would be disingenuous to characterize there is no Other as purely country, or commercially accessible. But dwelling on these concerns is to foolishly gaze beyond the alchemical wisdom imparted by Rhiannon Giddens’ musical efforts, and afforded to those with open hearts. Giddens should be approached as the boundless generator of inspiration she is, aided valiantly in this instance by Francesco Turrisi.

Francesco Turrisi, Review, Rhiannon Giddens, there is no Other