Guy Clark was one of the greatest, most revered songwriters to ever put pen to paper, and put a legacy of songs together that generations will labor to beat, ultimately in vain. His wife Susanna was the muse behind a thousand songs, not just from Guy, but from a healthy gaggle of Texas and Nashville songwriters, while earning respect as a songwriter and composer herself. Townes Van Zandt was the ideal specimen of the troubled poet, with emotions too rich for the world, and songs that will outlast the living. And they were all friends. And they’re all now gone, along with many more fallen greats, leaving those who cherished their music and musings searching for something or someone who can replace the magic in a new, and much more dull world.

To us, it’s a sad state of affairs that Guy, Susanna, Townes, and so many more that made up the core of the alternative to country in the 70’s and 80’s are gone, but to Rodney Crowell, these weren’t just distant stars on some stage that perhaps he got to see once or twice in his life, and are only known through their music and the make believe personas the mind assigns to them.

To Rodney Crowell, these were his close personal friends. They were his family. He laughed with them. He lived with them. He cried with them, and fought like cats and dogs with them. When they stumbled, he was there to catch them. When he stumbled, the story was the same. As gaping and painful as the holes are for fans to fill where these past titans have moved along, for Rodney Crowell, it can only be that much more cataclysmic and personal, and that much more impossible to resolve in the mind and heart.

It’s hard to believe that at one time Rodney Crowell was credited for notching five consecutive #1 country music singles in a row, and not in some far and distant reality, but in the late 80’s, right before some of the biggest stars still in country music today were just getting their start. Rodney Crowell doesn’t seem like a commercial kind of guy. He’s Americana. But in 1988, mainstream country was a much bigger tent, and worried about the amount of substance in the format much more than today.

Now the country music radio star version of Rodney Crowell seems light years away. Like many of the original artist that made up the alt-country world that we now refer to as Americana, Crowell’s sound is much more blues than it is country these days. These artists traded in their boots for fedoras, and have gone exploring other regions of American roots music, maybe just as much from inspiration as to put distance between their music and what much of the public thinks of when you use the term “country.” 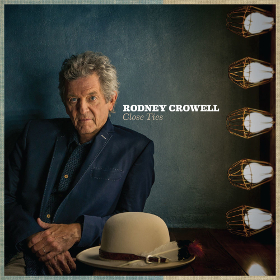 Crowell has not been caught napping in the last few years—releasing a couple of well-received duet albums with Emmylou Harris while pumping out original records as well. But Close Ties feels like something much more calculated, purposeful, and inspired, like he’s been saving up material, and waiting for the right time when the wounds aren’t so fresh, but the memory and sense of loss is still ablaze in his mind.

Close Ties finds Rodney Crowell getting incredibly personal, naming names, and using candid language with incredible honesty and a colloquial candor most artists are too inhibited to communicate. Rodney Crowell is one of the very few people who can refer to the great Susanna Clark as a “bitch,” because that’s how close he was to her. If you or I tried that, he’d kick our asses, and for good reason.

Usually when you listen to records, you hear the name of the subjects of songs, but they’re abstract characters in the listener’s mind; past lovers or friends of the writer with often the names changed to protect the innocent. Maybe years later some dots are connected, like with Eric Clapton’s “Layla.” But on Close Ties, Rodney Crowell takes moments to sing about people we all know as music fans, and about situations we’ve perhaps heard about in lore. This makes the stories feel that much more stark. They’re serial to the ongoing narrative about the music that is still unfolding through Crowell and his contemporaries.

The specificity in songs like “Life Without Susanna,” or the songs about Crowell’s career like “It Ain’t Over Yet” and “I Don’t Care Anymore” is pretty incredible. “Nashville 1972” is simply an account of Crowell’s arrival in Music City, and his very early place in it.

I first met Willie Nelson with some friends at a party
I was 22-years-old, and he must have been pushing 40
Well there was hippies and reefer and God knows what I was drinking pretty hard
I played him this shitty song I wrote, and then puked out in the yard.

Even when you can’t place the names with true to life figures, like in the touching “Forgive Me Annabelle,” the songs are rendered that much more real feeling by the personal nature of the material. Though some things on Close Ties might be embellished, the fact that it all feels based on actual events is what gives this project a vitality apart from your average record from Rodney Crowell or anyone else. The songwriting is so good, you don’t care if the chorus on “Forty Miles From Nowhere” doesn’t rhyme.

Close Ties isn’t just another collection of songs, it’s an oral history of Rodney Crowell’s life told through the filter of watery eyes, about feelings that in some cases are still raw, and with an honesty and candidness that’s rare.