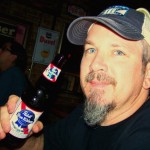 I really like this album, and I’m going to tell you why:

Back in the 90’s and the early ought’s, the only resort for bands that wanted to do their own recordings were these crappy Tascam and Roland 4-track machines that mixed down to cassette. If you had some serious dough, maybe you could get an 8-track that mixed down to CD, but they usually only had two audio inputs and were heroically hard to use.

90% of the homemade projects that came from that era were virtually worthless, but every once in a while you would get a true gem, not in spite of the technology, but because of it. Just like giving birth in your house with a midwife instead of a sanitized hospital, the homegrown, un-studio feeling of a well done home record can be something very special, with a REAL feel, a soul forged in a homemade spirit, something to be proud of like Dolly Parton’s Coat of Many Colors. Hank III’s Straight to Hell was recorded on one of these late-era track machines, and has that same feel that can’t be faked in a studio.

Unfortunately the mainstream availability of studio-quality recording devices has bled some of that feeling out of many recordings, but not this one. And not only does it have the homegrown feeling, you can also tell that heart and time was put into this project. It was made with patience, and you can tell it all came out like envisioned.

UnIncorporated is a fun album with great songs that is not afraid to get too deep, or at times to be refreshingly immature. The musicianship is not superlative, but it is solid, and the heart of each song is purely captured. “Hellbilly” Ronnie Hymes has a voice like “Hellbilly” Ronnie Hymes, that keeps you hanging on every verse when the words don’t, which is not very often. He really knows how to use vocal inflections for emphasis, and how to sing how he feels instead of just singing the words.

There are a lot of fun songs here, including “Gear Slamm’n Daddy” (the only song Ronnie did not write), “Dueling Kazoo,” and “That Don’t Make Me Wrong,” in which Hymes figures out how to be self-righteous and self-deprecating all at the same time to deal with everyday road rage. This album has a real ‘everyday hero’ feel to it, with songs like “My Baby” about his significant other, and the touching “Summers Gone” about the all too common visitation father, and the tough feelings of guilt and pain and love that goes into a long distance relationship with your child.

The beauty of this album is it’s roots in truth. When so many Nashville products try to sing about the common man’s common struggles, they have to do it from the outside looking in. What Ronnie is doing is getting what is inside out, to keep his sanity.

The title track “UnIncorporated” is a great song that hits on the same themes the song “Wish” by Left Arm Tan does that I reviewed a while back; that being that you should be happy being yourself, and not bend your ways to anybody (especially Nashville). However with all the good songwriting here, I swear the wittiest song here is ostensibly a commercial. “The Redneck Minute” entertains you simply by the imaginative phrase turning, even if you’ve never seen Big D’s Redneck Minute.

This album has its warts and weak songs, just like most all albums do. But since this isn’t some studio project put out by a slick label, the flaws are understandable and forgivable, if not endearing. As bawdy and bellicose as this album is at times, you can tell it was made with love, like mother’s apple pie. Homemade. True. Real. UnIncorporated.

Purchase or Preview Tracks of Unincorporated from CD Baby!

Ronnie in a homemade video, singing the first track of the album: