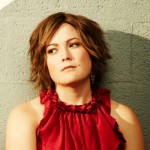 I come to the Sara Watkins world admittedly from the outside looking in. I wasn’t along for the ride when her previous band Nickel Creek blew up and made stars of its principals, principally mandolin maestro Chris Thile who now heads The Punch Brothers. Since Nickel Creek split into forks, some folks have been laying their silver down on which player will outmatch the other. Not having much of a dog in the race, I just saw the scuffle and dust, and hearing some bits of the music made me realize there was probably a tremendous bevy of talent left behind in Nickel Creek’s ashes that was worth scoping out.

Just like Chris Thile and the Punch Brothers album Who’s Feeling Young Now?, Sara Watkins’ Sun Midnight Sun is fiercely progressive for what you would consider roots or string music, but in such a remarkably different direction. The Punch Brothers are a challenging, heady, orchestral set of complex equations that tend to lack accessibility as a trait, however much that is made up for in talent. Conversely, Sara Watkins is refreshingly light and easy, maybe too easy for some in stretches, with whimsical, sweet tales dealing with a single girl’s struggles, and the fiddle (Sara’s charge in Nickel Creek) mostly called upon for textures instead of structure.

All that said, they figured out how to throw some grit on these Sun Midnight Sun recordings through technique, and really brought a raw and real feel to this project that surprises you from the otherwise pop feel of some of the compositions. Watkins has sort of a cute, spinster-like way about her songwriting and cover selections that draws you in. The production is very heavy handed. Think Emmylou Harris’s Wrecking Ball, with pounding, rhythmic percussion tracks that give this music a very primal, yet at the same time elevated, bohemian feel, and a groove bordering on a techno infectiousness in spots. 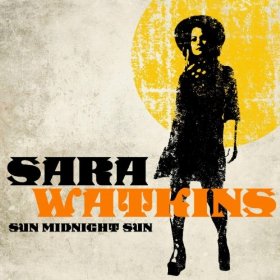 For me, Sun Midnight Sun was one of those albums that had some good songs that I latched on to, but the project never stuck to me as a whole. But those few songs though, let me tell you. I’m libel to recycle them over and over in one setting until I feel stupid about it. The opening track “The Foothills” may be the leader in the clubhouse for instrumental track of the year. This amazing folk/bluegrass composition is built in layers like a buttermilk biscuit. They stack upon each other gradually and meld in unison through a recording technique sure to be asked for its recipe by distinguishing ears for years to come. And beneath all of that is a heavy, progressive world-beat that burrows straight into your primal nerves.

“You and Me” employs this similar rhythmic base, but lays on top of it a sweet and simple love story. Yet again an impressive production approach is able to create space, dimension, and distance in a recording that dramatically elevates a rather plaintive, but nonetheless compelling story. Sara Watkin’s songs sound like memories.

That leads us to the heart of Sun Midnight Sun, the almost 7-minute “When It Pleases You”. Though in a quick sniff this song may smack of Alanis Morissette whining or something, there’s so much more here. The way it drones, the way the song is structured so Sara’s voice is strained throughout, cracking in moments, its cyclical nature captures the sonic equivalent of being in a relationship that you know is never going to work but can’t seem to get out of. The music illustrate the frustration at the heart of the song’s message. This is a brilliant stroke of lyrical theme and music coming together to drive home the mood and inspiration for the song through empathy.

After trying valiantly to be similarly compelled by the other songs on the album, I can say confidently there’s nothing wrong with any of them, but I didn’t find them as appealing as the three others previously mentioned. I anticipate the experience being completely different for someone either more familiar with Sara’s work, or someone more inclined to enjoy this fiercely progressive side of roots music. Or frankly, female listeners I think will have a foot ahead of us males at finding more universal appeal in Sun Midnight Sun. But I thoroughly enjoy what I thoroughly enjoy about this album, and in no way could justify telling people that they shouldn’t check it out. I always hate to recommend cherry picking, but I must say not at least having “The Foothills” in your music collection seems abundantly stupid.

Props should be given to producer Blake Mills on this one, and it’s worth mentioning that Fiona Apple, Jackson Browne, and Benmont Tench (of Tom Petty) appear on the album as well.

Give this one a try. Go into it understanding what you’re getting into, and you might just find some of your favorite music so far this year.