When it comes to one man bands, Scott H. Biram is the franchise. There may be artists with more soul and songwriting skills like Possessed by Paul James, or that are more brutal like Joe Buck, but Biram is the one with the big Bloodshot Records deal, the one that is the complete package, with soul, grit, and brutality, in blues, punk and country. He is the top of the heap, the one that inspired so many others. He’s tussled with semi trucks and spilled his guts out on the highway just like he’s spilled his guts out on countless stages all across the Western world until he earned that glorious ‘H’ in the middle of his name. Like the initial on a superhero’s chest, one letter says it all. Hiram Biram: A genuine Southern-fried, Texas-bred little ball of badassedry, and nobody has ever rocked no nonsense gray velcro tennies harder.

He’s also one I would consider a live performer first, which always presents challenges in the album making process. Live performers must be able to capture their energy in recordings. That’s exactly what Biram does in the Bad Ingredients tracks “Dontcha Lie To Me Baby” and “Killed A Chicken Last Night”. You must be able to connect with people without being able to look them in the eye, and that is what he does in “Broke Ass”, “Open Road”, and “Wind Up Blind”. And you must be able to innovate, and offer something to your audience above a simple recorded version of what they see in person, and that is what Scott does in the epic “Victory Song”.

Other problems present themselves when you’ve been making music for over a decade, and have 8 albums under your belt. Expectations from your fan base kick in. That big ‘H’ on Biram’s chest could start to become a burden. You have to keep tapping deeper wells, venturing further into the depths of the soul to find new themes, to discover what needs to be said that has never been said before. Again, Biram does all of this, and in the process, may deliver his best album yet, and possibly one of the best albums in this calendar year, buoyed by one of the year’s best songs in the aforementioned “Victory Song”. With Bad Ingredients, Scott H. Biram simply delivers. 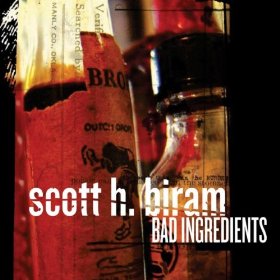 What struck me most about Bad Ingredients was the variety of styles found here, and that each is done with such masterful proficiency. It’s not just tone and style, it’s the inflections in his voice, and the different ways each song is recorded according to its style. A side effect of that is that there’s something here for everyone. There’s sweet little country blues numbers like “Memories Of You Sweetheart”. There’s chest beating punk/country rockers, there’s old time blues standards, and everything is grounded in the roots with authentic blues progressions and language, even the progressive and multi-layered “Victory Song”.  At the risk of sounding like a master of the obvious, he’s just one man, but he’s able to do so much and create such a contrast that it keeps you engaged from track 1 to 13.

And it is delightfully sloppy. Just like I doubt Scott has ever taken a spin on a bidet, I doubt he’s ever used a click track or a metrodome. The lyrics to “Open Road” don’t even rhyme, yet it is one of the standouts.

Already there’s talk from some that Bad Ingredients is is a candidate for the best album of the year. For an album to get that distinction eventually, it must endure months of scrutiny and heavy listening. But from what I’ve heard so far, it at least deserves to be considered for that type of top tier recognition.