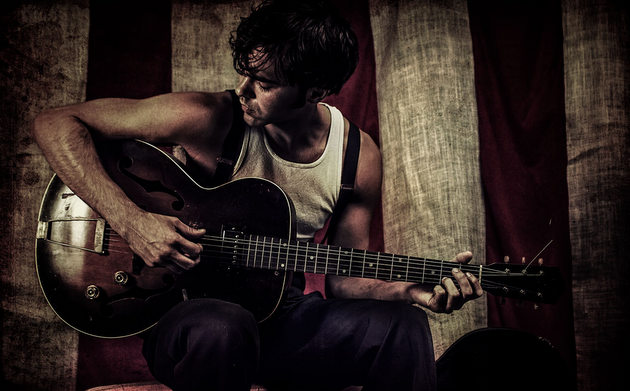 It’s hard enough to make it in music. There’s many who spend their entire lives trying to crack that nut and never even get enough momentum behind them to even fill half their local watering hole. It’s even harder to make it in music when you’re really not trying to. Or at least when you’re not trying very hard. But music that is begging to be heard always finds its path, and Austin’s Shakey Graves is a testament to that.

Given the name Alejandro Rose-Garcia by his parents, and Shakey Graves by some tripping patron of Austin’s Old Settler’s Fest a few years ago, he was a struggling actor with some musical chops when he decided to release a silly little album called Roll The Bones recorded in various living rooms around Los Angeles in January of 2011 through the DIY site BandCamp. That Shakey once appeared in a few episodes of Friday Night Lights as “The Swede” and had earned himself a smattering of speaking parts here and there was little help in getting folks to listen to his sparse, one man band musings set to blues-style guitar pluckings and the thump of a suitcase drum. But there was just something quirky enough about Shakey Graves to make the whole thing stick in the minds of the few that were exposed. And slowly the few became many. 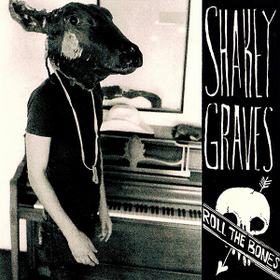 Roll The Bones was never released on iTunes or Amazon. It never got picked up by some big time distributor or label. Simply by word of mouth and a few residencies in dive bars in his hometown of Austin like Hole In The Wall and The White Horse, the next thing you knew Shakey Graves was selling out clubs all across the country, touring with Shovels & Rope and playing the Newport Folk Fest, and being talked about as one of the fastest-rising commodities in American roots music. One of BandCamp’s first big independent stars, if you will.

“I considered the way I absorbed music: A band that a friend recommends influences me a thousand times more than a band iTunes recommends,” Shakey told Austin Chronicle‘s Kevin Curtin recently. “The idea for the first album was anti-marketing. I wanted to figure out how to acquire fans right now, different from the old model where artists were pushed at you. I spent the last three years building a fan base that felt like they discovered me, which they did. That’s something no one can ever take away.”

But despite all of Roll The Bones‘ word of mouth success, the experience of the album was somewhat limiting. It was a little bit eepish and underdeveloped. Granted, this was at the heart of the charm that many found so appealing, along with the message of Shakey’s stories. But it wasn’t a wholly original work to the well-seasoned ears of the Deep Blues crowd as it was to many of the individuals who incidentally stumbled upon it. And after a nearly four year hiatus, Shakey needed something to sustain the wave of momentum building behind him.

How to evolve into a full band setting while still holding onto what won you such rabid grassroots support was the precarious challenge Shakey Graves was asked to pull off with this new Dualtone release And The War Came, and it’s what he accomplishes with such alacrity, the listener remains delightfully unaware any such challenge even existed. You’re simply listening to Shakey Graves blossom from an obscure one man band for people in the know, to an artist worthy of a wide ear who could and should help define what the vanguard of roots music is in 2014. 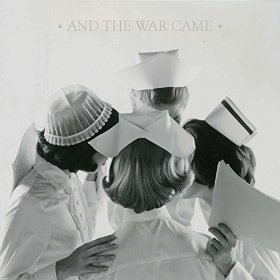 And The War Came is still Shakey. It is still delightfully sparse and still includes some songs that are just him. In the end it’s about the textures and words, not about a head count of contributors for each song. Each track is appointed the proper instrumentation called for by the story and mood, and nothing more. Most notably there’s multiple contributions from singer/songwriter EsmÃ© Patterson, who in conjunction with Shakey evokes the similar magic of singing pairings like Shovels & Rope and The Civil Wars.

The “boom, chick” nature of the beginning of this record may throw some off the scent of what’s really at play on this project, which is singing and songwriting. Where Shakey’s original incarnation was about the art of subtly and forged itself during the high tide of the early 2010’s hipster onslaught, this new effort is about Shakey rearing back and really discovering the range and capabilities of his voice, while being afforded the latitude to discover wider reaches of melody and rhythm from having more hands on deck. Almost like Emmylou Harris, Shakey knows exactly where his voice will fail him and smooth tone will become gravely warble, and this is an invaluable attribute for him in his effort to express emotion.

And The War Came is tell tale folk wayfaring blues with a dash of country roots, but like all artists who in turn help define their epoch in music, Shakey Graves elevates himself beyond definition, and presents music to the world that obscurity is no match for.

Purchase And The War Came on BandCamp

Purchase And The War Came on Amazon