Every once in a while, an album comes along that changes everything. It’s an album that inspires other albums, and dynamic shifts in tastes and approach throughout a sector of music, while at the same time dashing the dreams of other artists, as the purity and originality are way too much to attempt to rival. Slackeye Slim’s El Santo Grial, La Pistola Piadosa is one of those albums.

El Santo Grial is about a man, and a gun. It is a concept or theme-based album that follows Drake Savage, a man torn by religion, told since he was a boy that he was “The Chosen One”, but conflicted by his desire to see proof of a higher power. That proof is eventually bestowed one day in the form of a legendary gun for which the album is named. 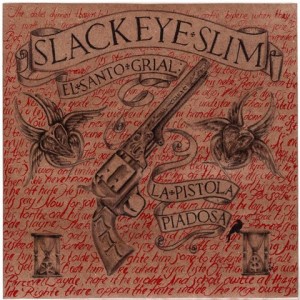 El Santo Grial is a masterpiece, exquisitely produced, arranged, and performed. This is a patient, uncompromising album. You can tell time was never introduced into this project as a goal. The goal was to flesh out Slackeye’s vision without ever settling for second best, and that goal was accomplished.

The music is a wild mix of Western, old-school Spanish, gypsy, and cowboy narrative. In some spots it probably is better described as simply poetry with a music bed. Think of the score from the film The Good, The Bad, & The Ugly, with some Dick Dale flair and Johnny Cash imagery. This album is full of textures and layers, yet conveys a tremendous amount of space at the same time. Many of the sounds of this album are harsh and biting–lots of percussion, gong bangs, horse braying–but it is the best mixed and mastered album I’ve heard in years, where the recording concepts become as important of an asset to the music as the words and instrumentation. The sharp sounds, the contrast, and the space is what transports you to the setting where the album transpires: in dusty, gritty, wide open spaces. You get completely immersed into the landscapes this album inspires in the human imagination. 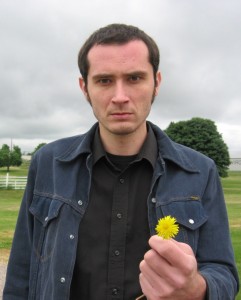 The music, the story, the concept are quite original, but not wholly unique. What makes El Santo Grial wholly unique, and takes it from good to legendary, is the approach and patience. Each track was recorded in the ideal environment to get the desired mood and acoustics: a junkyard, an old mansion in Anaconda Montana, The Museum of Fine Arts down the road in Butte. If a bottle strike was called for, it wasn’t replaced with a cowbell simply for convenience. Slackeye also had the assistance of songwriter Graham Lindsey, who I’m sure had a lot to do with the wisdom captured in this album.

One important question one might ask after listening to El Santo Grial is if any of the songs could work autonomous of the concept. This might be the most important litmus test for a concept album. Though accessibility is not a great attribute of any of these songs, tracks like “Introducing Drake Savage”, “El Mundo, Mi Amigo”, and “Tomorrow Morning’s Gonna Come” are strong enough to work on their own, though every song on this album works better when listened to in context, especially for the first time.

I can’t say enough about this album. It is dark and fey, but a fine example of how patience can lend to quality music whose value is so much more fulfilling, and its fate so much more hopeful than the rushed and safe projects clogging the consciousness these days.

When an album hits me like this, I usually like to take some time an revisit it months later to reasses before making bold claims based on initial reactions, but I feel confident in saying, as an album, El Santo Grial, La Pistola Piadosa is one of the best ones I’ve heard in a very long time.

El Santo Grial is available from slackeyeslim.com, in CD form with a free digital download, or as a download only.

Samples can be heard on Slackeye’s Reverbnation Page, and selections from the album will be featured on this week’s Saving Country Music Radio broadcasting Saturday night (6-25-11) at 9PM Central, 10 Est.