As the enlightened country music public was attempting to ingest all the recent offerings from a cavalcade of female artists doing their part to save country music like Holly Williams, Kacey Musgraves and Ashley Monroe, alt-country legacy band Son Volt released a fiercely classic country album themselves called Honky Tonk, proving that the resurgence of real country is multipronged, multisex, and multigenre. Maybe, just maybe, classic country is cool again.

As one of the original members of Uncle Tupelo, Son Volt frontman Jay Farrar is one of the forebearers of the alt-country sound that now has morphed into the all-encompassing Americana behemoth that here in 2013 is enjoying a meteoric rise in influence. But instead of trying to figure out how to ride that popularity wave, Farrar and Son Volt release an album that is so doggone country, you could almost call it conceptualized. Honky Tonk is way more Jason Eady than Jason Isbell, featuring simplified, classic country stories, steel guitar and fiddle, and a revivalist spirit that champions the idea that the classic country sound will always be relevant as long as working-class people gather in beer joints for camaraderie, conversation, and commiseration. 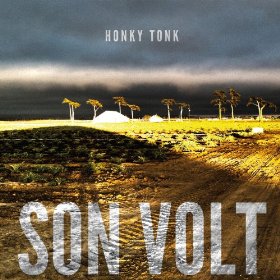 Honky Tonk draws its influences from across the American country music landscape. The song “Seawall” mentions West Virginia and Kingman, Arizona, and features the double fiddle indicative of Texas. “Hearts and Minds” and “Brick Walls” also build from a double fiddle bed. But if Honky Tonk‘s heart rests anywhere, it is on the West Coast, and not just in “Bakersfield,” one of the album’s better tracks. There’s a little Flying Burrito action going on here, where country is come to sort of from the outside looking in. This doesn’t hinder the music, it instills it with heart. Son Volt is playing classic country not from habit, but from choice. They cut a classic country album because they wanted to.

This move can’t be described as completely out-of-the-blue though. 2009’s American Central Dust seemed to hint of the more hard country direction that Honky Tonk eventually came to represent. But there’s still a few overlays in this album that inform Son Volt’s alt-country roots, like the warbly organ on “Livin’ On,” or the watery guitar on the album’s final track “Shine On” that is indicative of 60’s styling. For my money, Honky Tonk‘s can’t miss track is the eloquent and heart wrenching “Angel of the Blues.” Jay Farrar’s chord selection is sublime, sucking you into the solemn story.

A little worry that this album will be too sleepy for some folks is probably warranted. Son Volt never really takes Honky Tonk up tempo. It’s pretty sedate throughout, with not a lot separating the individual tracks from each other. At the same time, it is very cohesive and thematic in its approach, allowing you to get lost in the music. Farrar favors ambiguity in his songwriting to constructing characters and trying to get you to care about them. He’s more about giving off hints and moods, and letting the listener’s ear and mind construct the realism according to their own experiences.

Something is going on in country music right now, and we may not know its full breath or impact until we’re able to look back on it in the future. But from American Idol’s Kellie Pickler, to Ashley Monroe, to Son Volt, classic country is making a strong resurgence, and its fans may have to stop playing the downtrodden, forgotten demographic card they’re so used to identifying with. Things are finally changing, and if Son Volt’s Honky Tonk is any indication, they’re changing for the better.