Whenever I am rifling through the always-mountainous pile of albums on my desk peeping at me like hatchlings, begging for review, I’m looking for something. Sometimes that something is obvious, like great songwriting or engaging music. Sometimes it is something intangible, something I didn’t know I was looking for until I found it. Sometimes I use an album to set a context on something I want to express about the greater music world, a trend or something that a particular album is a good example of. 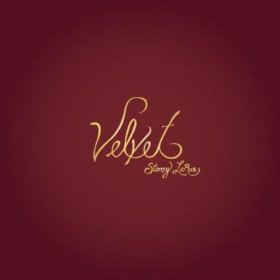 Some assume if I don’t write about an album, or don’t talk about an artist, that means I don’t like them, when many times it just means I don’t know what to say. Stoney LaRue, one of the stalwarts of the Texoma Red Dirt movement, released Velvet in late August, and though a lot of folks whose music tastes I usually align or agree with were singing the praises of this album, I couldn’t find anything I was looking for in it, and didn’t know what to say about it.

Honestly, this album feels and sounds “safe”. At first it felt like the albums you hear coming off of Music Row all the time, where it felt like the artist made the album because it was album making time, instead of from a sincere passion. Some of the lyrical lines feel lazy. They rhyme, but they don’t say much. The music is good and tight, well arranged and performed, but there is no risk in it. Velvet is also a little undefinable. It is not really country, not really rock, and it never really lets loose. Just like the texture of the fabric the album is named for and that adorns the CD cover, Velvet is “soft”, which is surprising coming from a guy that sports a bandana, and skeletons flashing devil horns on his koozies.

However there is something that wouldn’t let me give up on this album, and I am still not exactly sure what it is. After giving it a spin and not knowing really what to do with it, I’d perch back on top of Review Mountain, but I would invariably grab it again just to see if I could find whatever I was missing, never willing to give up on it. After listening to it I would find myself humming the tunes, and wanting to hear them again. That is because for all of Velvet‘s safety, for all of it’s lack of obvious songwriting prowess or easily-seductive music, there is an appeal here. 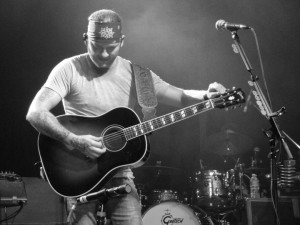 Maybe it’s because however mild the different elements are, combined together they equal greater than the sum of their parts. Maybe despite the safety and perceived pallidness of this album, behind it Stoney still gives his music tremendous heart that makes it rise above superficial concerns or a music reviewer’s traditional bullet points. In the end if I had to tell you whether I like this album or hate it, I would say I like it.

Despite the safety, there is a good flow to this music, and a patience. In most music, you have a group of guys doing their best individually, hoping it fits in the context of the song. With Velvet, everyone is on board, listening to the music and what the song is calling for. It’s like the difference of four horsemen riding side by side across the plain, or four horses yoked together, all pulling towards the same purpose. You’re not wowed by any individual effort, but in the end the efforts are more unified and effective.

The walking, rhythmic acoustic line in “Dresses” gets stuck in your heart. The chorus of “Look At Me Fly” is undeniably infectious. “Travelin’ Kind” uses the soft and safe approach to it’s advantage, and adds simplicity to the mix to become the standout composition of the album. “Travelin’ Kind” never really goes anywhere, which is why it is good, and that approach parallels the song’s message. It also features Lee Ann Womack on harmony vocals.

One thing I’ll pick on is the song “Te Amo Mas Que La Vida”. From Tom Waits to Jimbo Mathus to many others, there is a current trend to include one Spanish-oriented song on your album. I think folks think it adds spice to a project, but what it really does is add predictability, and many times, a easily-forgettable track. If you like the Spanish context, great. But add two songs, or no songs. And invariably the song ends up as the 7th or 8th track on the album; go back and check.