When they finally get around to opening a proper brick and mortar Red Dirt Music Hall of Fame in Stillwater, Oklahoma, you can be assured it will be seeded with a bust of Stoney LaRue. Though many modern day artists love to cite Red Dirt as a sound and influence to their music since it allows them the latitude to slide between country and rock, it’s only a select few who can pledge their allegiance as one of the founding members of the movement. Ol’ Stoney lived in the famed “Yellow House” with Cody Canada and Jason Boland back in the day, and swept floors at the at the Tumbleweed Dancehall before taking the stage himself. Stoney was there to see it all unfold.

Some people love to complain that Red Dirt is as hard to define as Americana, but it isn’t as much of a sound as it is a feeling. It’s bound to the roots from the influences of those early Oklahoma country rockers like Leon Russell and J.J. Cale just as much as it is to the more pure country influences, with the songwriting of native Oklahoman Woody Guthrie mixed in as well. You want to get people thinking a little, and you want to have something to say. You want to tell a story. But most importantly you want people to ease back and and be reminded of the simple joys of life. Red Dirt is music for back porches and Saturday nights. It’s just as much a mindset as it is a sound.

You can use all kinds of colorful language to describe Red Dirt music or diagram it to death. Or you can just cue up the music of Stoney LaRue and have it illustrated right there for you. Stoney’s new album Onward is more than just a cool cover designed by Casey Howard and Carl Kinsel, it’s a comeback record for Stoney of sorts. In 2015 while still promoting his last proper release called Aviator, he found himself in a difficult situation. There were two women, but only one Stoney, and police were called. Though his girlfriend at the time refuted the worst parts of the story, it still wasn’t a good look. “I am going to take some time to work on myself,” LaRue said in a statement, and some of that work and self-evaluation is reflected in Onward. 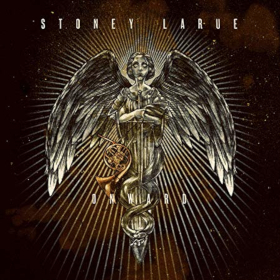 Stoney’s primary collaborator on the project is noted songwriter and Grammy winner Gary Nicholson, who not only produced the record, he co-wrote 10 of the 12 tracks, most with Stoney, but some with others. This includes the song “Falling and Flying” that some may recognize from the 2009 movie Crazy Heart starring Jeff Bridges. It’s a really great song that deserves more recognition, and is one of those tunes you immediately want to sing along to. Moreover, “Falling and Flying” might work as a better explanation and apology for Stoney’s stumble than anything he could personally compose.

Stoney has always been one of those songwriters who knows his strengths, and his weakness, and is willing to share his writing credits to get a song right. That is what he and Gary Nicholson accomplish frequently during Onward. Some of the more fun songs are what certain Stoney fans will gravitate towards—whether it’s the bouncy and funky “Hill Country Boogaloo” about that region between San Marcos and San Antonio in Texas where so many Texas and Red Dirt songs get made, or the ode to respiratory relaxation, “Worry Be Gone” that Nicholson wrote with the venerable Guy Clark when Guy was still around and puffing.

But “Drowning in the Moonlight” might be the standout contribution from Onward with it’s aching melody elongated by a mournful steel guitar, leading into a chorus that touches on musical perfection. It is part of a suite of songs, including “I Can’t Help You Say Goodbye” and “Thought You’d Want To Know” that show the touching side of Stoney you may not always experience on stage at rambunctious Red Dirt shows.

And you can’t have Red Dirt without country, and Stoney serves this up in the excellent, heartbreaking reflection of a boozer, “Message in a Bottle.” The memory of Merle Haggard and a different mood is evoked in Stoney’s rendition of “Let’s Chase Each Other Around The Room,” which Haggard composed with his songwriting sidekick, Freddy Powers. There’s also ample cameos on the record, including Tanya Tucker singing “Meet Me in the Middle” with Stoney, and both Ray Benson and the McCrary Sisters add some chorus and answers to “Evil Angel.” You’ll also recognize Mickey Raphael on harmonica here and there, and if you obtain a physical copy of Onward, the Red Dirt Legend himself, the recently-deceased Brandon Jenkins, sings “High Time” with Stoney.

In a year with such landmark releases in country and roots, Onward feels solid and quality, but probably not exceptional. Some songs you’ll pass on, while others will make it as standards of Stoney’s live show. But most importantly, it’s a resurrection of sorts for one of Red Dirt’s most important figures who is willing to express his faults and vulnerabilities, and is eager to prove he’s moved on from them, while also not being afraid to sing about kicking back and having a good time. In other words, Onward is classic Red Dirt music.