When perusing the bereft landscape of mainstream country music and searching for a female performer with some substance and an independent spirit who could possibly still raise a blip at the highest levels, Sunny Sweeney is one of the first names to come to mind. It’s not too hard to envision the Texas native making a splash in the mainstream because she has done it before. In 2010, her single “From A Table Away” made it all the way to #10 on the Billboard charts—a feat for any woman in this particular country music climate. Of course it helped that Sweeney had Scott Borchetta’s Big Machine Records behind her at that time. Sweeney was one of the very first Big Machine signees along with Taylor Swift, and when Borchetta opened up the Republic Nashville imprint, Sweeney was the label’s inaugural artist.

These days the particulars of Sunny Sweeney’s business dealings are much different. Her latest album Provoked was released through Thirty Tigers—the same independent, champion-of-the-little-guy distributor that artists like Sturgill Simpson and Jason Isbell use. But Sweeney’s sound still remains very much steeped in that space that can find consensus amongst both mainstream fans, and traditional/independent fans from leanings that are traditional, expressive, yet still accessible to the wide ear.

Just like Miranda Lambert and Kacey Musggraves, Sunny Sweeney is an east Texas girl at her core, and no matter what Nashville does, it’s never possible to completely quiet those jangling spurs or smooth out that accent. Sweeney though, compared to Miranda and Kacey for example, seems to have held onto her decidedly Texas style even more so over the years. She very much fits that mold of the Texas country artist that got big enough to be recognized by Music Row, but always felt just a little too authentic to do much more than experience that world from the outside looking in. 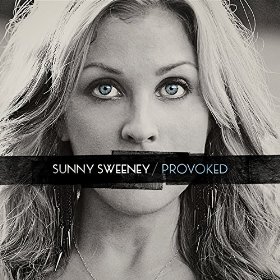 At the same time, Sunny Sweeney also has some quickly-identifiable fingerprints of the industry in her sound. Sometimes it feels like instead of hearing three chords and the truth, you’re hearing three professional songwriters and a hook. It might still be a hook that is hard to escape the appeal of, but the formulas and tropes find their way into the female side of country music too, and there’s a few of those overt moments on Provoked. The album’s two beginning tracks—“You Don’t Know Your Husband” and “Bad Girl Phase”—strike at that female answer to Bro-Country vein in portraying the sassy, non-behaving female quite directly.

“Front Row Seats” is a sensational track on this album, superbly written and pointed in its message, but it still plays very much to this Kacey Musgraves anti-conformist formula that the success of “Merry ‘Go Round” has given rise to. A song like “Sunday Dress” shows that when it comes to the women in country, ‘mama’ is the female version of the men’s ‘tailgate,’ and disobeying her wisdom is expected on an album at least a few times. From another perspective though, many of these trends and tropes are hot right now, and Sunny’s contributions overall are just a little more thoughtful, and little more developed, and a little more country than most of her country peers who’ve seen mainstream success.

Sweeney also strikes out on some limbs, and in moments let’s her traditional influences shine through unapologetically. The gem of this album might be the swing-timed “Find Me.” It is so aching, so brilliant in the way it builds tension both in the story and sonically until Sunny has swept you up in a wave of emotions. Like all but two of the songs on Provoked, “Find Me” is co-written by Sweeney, and feels like a very personal expression. The only true cover on the album is Randy Weeks’ “Can’t Let Go” which has been done many times by many artists, maybe most notably by Lucinda Williams, but Sweeney really nails her version, with the song seeming to be custom-made to fit her Southern twang, and the half-time beat highlighting the chorus being the perfect call in the arrangement.

“My Bed” with Will Hoge is another Provoked highlight, and is a good example of how Sweeney also translates well into the more progressive, Americana-style of production that a few of the album’s tracks veer toward. And though the sassy, non-behaving female formula was decried above, the final track on the album, “Everybody Else Can Kiss My Ass” is just too damn fun, the lyrics too good, and the steel guitar too hot to give it anything less than two guns up.

Sunny Sweeney has a very sweet, very alluring natural tone to her voice, but it has always felt like she stops her phrasing a little too short, as evidenced on Provoked in the song “Second Guessing.”

In the end it is not Sunny Sweeney’s super heartbreaking sentimentality, or her high caliber songwriting that makes her stand out in the crowd. It is her practical, pragmatic, bridge-building approach to country music for all that stays true to her nature that has you rooting for her no matter what the color of your country music stripes.