The long lineage of Th’ Legendary Shack Shakers and their lascivious leader Col. JD Wilkes—which has already etched quite the unique and interesting path over the years—has just taken yet another intriguing turn. Titans in the underground even before the famous progeny of Hank and Waylon were commanding everyone’s attention, and one of the original bands to help revitalize Lower Broadway in Nashville when it was nothing more than a bunch of dirty bookstores in the shadow of the mothballed Ryman Auditorium, Th’ Legendary Shack Shakers are now one of the few “underground” outfits left drawing crowds and doing anything even nearing relevancy.

But the near history of JD Wilkes has been a lot more convoluted than just cramming out Shack Shakers records every couple of years. A few years ago JD started a more primitive country/mountain music band called The Dirt Daubers with his romantic counterpart Jessica Lee Wilkes, first as sort of a side project, and later as a full-time situation. It was an intuitive maturation for The Colonel and his music. Did he really want to be ripping his shirt off and crowd surfing while shooting off snot cannons to punk versions of old blues reels into his 40’s?

Yet The Dirt Daubers never really found that level of success fellow contemporary string bands such as Old Crow Medicine Show and the Carolina Chocolate Drops did, despite offering a real solid interpretation of old standards mixed with originals. So at some point J.D. decided to add a little bit of his Shack Shakers shtick into the Dirt Daubers routine, instilling it with much more energy, guitar crunch, and showmanship than your average string quartet.

But this is where the twist comes in. At some point Jessica Wilkes decided she was tired of playing second fiddle, releasing a solo EP in 2015 called Lone Wolf. What the sordid details and subsequent steps were to the situation we have today, I can’t tell you, and I’m not even sure it’s any of our business. But at some point JD Wilkes and Jessica Lee headed to Splitsville. 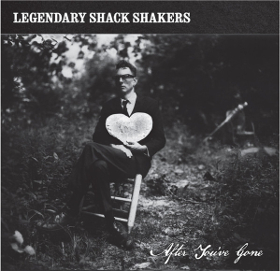 Not to get all People Magazine on your asses, but all of this is the setup and incredibly relevant to Th’ Legendary Shack Shakers new album, After You’ve Gone. This isn’t just a breakup record friends, this is a straight up kiss off to an old flame. Along with breakup songs like the title track, and a rendition of the classic “(Sing A) Worried Song,” you have a tune like “Frankenstein’s Monster,” which is so clearly is about JD Wilkes’ former half, it leaves little nuance to tittle the imagination.

And if you’re left with any doubt about just exactly who the target of the Colonel’s ire is in After You’ve Gone, he even does a version of the old traditional “I Wish I Was A Single Girl Again” from a male perspective (switching “boy” for “girl”), which is important because Jessica Lee performed this very song on The Dirt Daubers’ 2011 album Wake Up Sinners!

I don’t want it to come across as cheering the attempted dismantling of his ex wife that Col. JD Wilkes enacts on After You’ve Gone. There’s no reason for fans to feel the need to choose sides here. Jessica Lee was a sum positive for the Dirt Daubers music, and remains active in the roots scene. It’s probably true that JD Wilkes was the one that gave Jessica her start, but that doesn’t mean she’s not a worthy musician on her own. While covering the various incarnations of The Dirt Daubers, Jessica was contributing, talented, fetching, and if anything, instilled the project with an air of legitimacy any music outfit benefits from when they have a woman involved.

But most great art, regardless of the medium, is the stuff that is able to suspend a deep, roiling human emotion in a captured moment. After You’ve Gone is inspired by the heartbreak of JD Wilkes, and takes a decidedly Shack Shakers approach to extricating the pain from Col. JD’s rib cage in blistering, candid honesty that needs little to no road map to understand its origins. Nine records deep into a career, you can easily question, “What’s next?” Frankly the band’s last album, 2015’s The Southern Surreal felt like “just another” Shack Shakers album. But After You’ve Gone gets personal, and finds the outfit in top form.

This is vintage Shack Shakers in the way the cork is unscrewed, and blood and sweat come shooting out of blues guitar riffs with a punk overdrive, and crazy harmonica runs punctuate punches to the gut. There’s also a surprising amount of piano on this record, especially on the touching final song, “Invisible Hand.” JD Wilkes has always been a fearless venturer into the depths of the human id, exorcising what may evidence itself in sidewinding showmanship, but these bursts of energy and expression have exhalations of the spirit behind them that borders on the religious.

Th’ Legendary Shack Shakers are certainly not for everyone. This is some wild-assed, risk-taking, walking-the-line punk-enriched roots music presented with a devil may care attitude and an undying loyalty to always being true to itself regardless of the commercial appeal. After You’ve Gone is exactly what you come to the Shack Shakers for.

Editor’s Note: JD Wilkes has requested that the following note be added to this review. Though certain requests from artists are not always facilitated, due to the personal nature of this situation, it is deemed an important addendum.

“For the record, everybody, I still love Jessica to death. The record was written during a crazy time, and yes we are divorced now. But even in my angriest of songs, and in my angriest state of mind, I always tried to end my lyrics with a kind word in there for her somewhere. She is an incredibly talented person and deserves our respect and admiration. Please be nice to her because she was the love of my life.“