The one-of-a-kind two-piece country bluesy duo from Austin, TX known as The Boomswagglers’ freshman release has been like the Chinese Democracy of the country music underground for some time now, with delays and rumors of an impending release leaving fans on the edge of their seat, salivating at getting their hands on their raucous and authentic music. Well now the wait is over, and the sticker price is just right, as Hillgrass Bluebilly Records has just released The Boomswagglers Bootleg Beginnings as a completely free download.

Unlike most of the chaff that floods the consciousness of the music consumer today in the form of free music, this is a completely original project of previously-unreleased tracks (except for one song) that would be well worthy of your cash dollars if they were asking. But since Hillgrass has high standards for what it will ask hard earned money for, and the The Boomswagglers’ future is always in flux, they decided to go the gratis route, and I commend Hillgrass and The Boomswagglers for that. 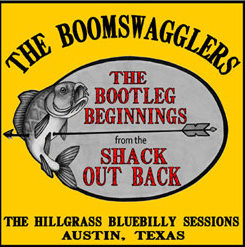 As for the album? I love it. This is a fun, engaging collection of songs, that highlight what is special about The Boomswagglers: their excellent ear for tone and texture, their ability to write engaging songs, their stellar guitar skills, and their authenticity.

This album has some physical flaws, and I won’t sit here and try to explain them away, and these are partly at the root of making this album free. But the tones and authenticity found on this album is the stuff that college grad musicians painstakingly spend thousands of dollars on gear and computer effects trying to re-create, yet can never touch. This album sounds authentic, because low and behold, The Boomswagglers actually are authentic. They wrote these songs while living in a shack, eating out of cans, digging up arrowheads in the dirt by day, and drinking their weight by night. It was the most basic of sustenance existences that 99% of us couldn’t hang with for a week. They were Boomswagglers, a name they gave themselves during this period of their lives, and that low form of living is ever present in every note on this album.

The music is wildly entertaining and deceptively deep. If you’re going to be a Boomswagglers song, someone’s got to die, and likely a woman. Some may find this silly, monotonous, or even offensive, but you have to listen beyond the lyrics, and unlock the carnal wisdom that is hidden in these songs.

The music is sloppy at times, but this is one of those projects where the sloppiness is endearing, and really creates an authentic setting for the songs. The verses to “Jim & Jack” don’t even rhyme in many places, but if they did, the song would be worse off for it. It is sung and written like someone who would hop a train and then steal a car would write a song. And though there is some looseness in this music, don’t let that blind you to the fact that both Spencer Cornett and Lawson Bennett are excellent singers, and amazingly superb guitar pickers, both of them, with adept finger picking and slide skills to go along with their natural intuition for tone and taste. 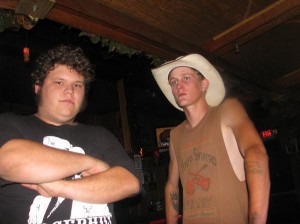 “No Good Low Down Son of a Gun” and “Working Man” start the album off with a fun flavor and a good pace that introduces you to what The Boomswagglers do. “Trailer Park Special” emphasizes their understanding of chords to set moods, and shows off their lyrical wit, while “Even Lower Down” and “Mornin’ Pills” prove they can cut all the bullshit out, and simply sing a sad blues song. “Wilco Blues”, one of their older recordings, draws you back to the heart of their Boomswaggler experience, and shows off their mastery of tone.

As for the song “Run You Down”, what can I say more than this is one of the best songs ever put out through underground/independent country circles. It first appeared on the Outlaw Radio Compilation Vol. 1, and was also nominated by Saving Country Music for Song of the Year in 2010. It is a country music masterpiece, and embodies all of the Boomswagglers’ strengths in one spellbinding composition.

My one beef with this album is that the Lawson Bennett-sung songs are not here, though there is a good explanation. One of Lawson’s mainstays of their live set is a cover song, and with this being a free release, it is not worth the hassle to get all the copyright ducks in order. Also the second-best Boomswaggler song ever “Berry Creek Blues” is probably just too good to give away for free, so I can’t fault them for keeping that keg dry. Still, the Lawson tracks could have replaced some of the slower ones and really taken this album to the next level.

I might be a little more harsh on this album if you had to pay to get it, but admitting to some of it’s warts by giving it away just makes the whole Boomswaggler experience that much more endearing and authentic to me.