Album Review – The Carper Family “Back When” 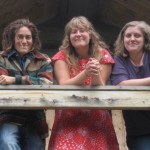 From Austin, TX comes a new album by The Carper Family, an Austin superband of sorts, as three women who’ve sat in with some of Austin’s most legendary country artists band together to make some legendary music of their own.

You might recognize Melissa Carper (aka Daddy Carper), and Beth Chrisman (aka Mama Carper) from the group The Camptown Ladies that also featured Gina Gallina. They join forces with Jenn Miori (aka Little Sister Carper) who played with The Corn Ponies amongst others, and with help from Austin country luminaries Brennen Leigh, and Cindy Cashdollar, they create excellent and authentic arrangements, and three part harmonies out of a tasteful selection of original and traditional songs.

Like all good country music, The Carper Family starts with strong songwriting and build out from there. I’ve been admiring Melissa Carper and her seemingly-effortless use of vintage country language in her songs for years, and she tops herself a couple of times on Back When. The country idiom in “Would You Like to Get Some Goats?” is absolutely sublime, where she uses farm chores and an idea for a “new brand of hot sauce” in allusion to love.

One of my music pet peeves is referening “texting” in songs because it seems so inevitable to be dated at some point, and it drives me even more crazy when modern references are mixed with a neo-traditional style like The Carper Family employs. But with Melissa’s swing-time song ‘Who R U Texting 2Nite?” she plays off of that anachronistic anomaly with such cunning wit, making tie-ins with past loves and land lines to where you can help but laugh out loud. (Sorry, too easy.)

…as you work that phone, with a true passion. Our love’s in the days by gone.

Beth Christman delivers her own stellar composition with the counter-intuitive “Don’t Treat Me Too Nice.” Is she being honest or ironic? Is she making reference to the fickle nature of the modern female heart? I prefer to leave that a mystery, because the ambiguity is one of the best elements of the song.

The song I liked the best was the opening “Loving Me Like You Do,” which puts in perspective that no matter how much Music Row wants to try and write authenticity into a female group like The Pistol Annies or the JanDear Girls, you can’t top three girls with true passion for the music singing for next month’s rent. 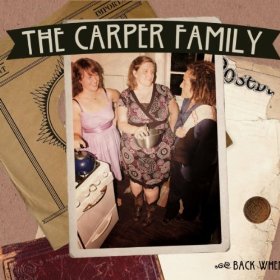 The cover songs on the album are all well-selected, and most fit into the Gene Autry, singing Cowboy, silver screen-era of country, songs like “There’s a Rainbow on the Rio Colorado” or “Pale Moon” that slip in smoothly amongst the Carper Family originals like “Texas, Texas, Texas.” There’s a lot of Western swing influence here, and a lot of just “Texan” influence. This is the kind of music you expect to hear when hanging out in an authentic Texas honky-tonk.

Criticisms? I don’t know, I guess at 15 songs, they could have weeded out a couple of the weaker tracks, and they maybe could’ve had a little more fun with the production, done an a cappella song to feature their harmony strengths, or messed with a little more reverb or dabbled with some percussion here and there to help separate the songs in style. But the album has such a good cohesiveness, how it works smoothly between the originals and covers, that I’m not sure I’d want to mess with it too much.

The Carper Family illustrates the unfair, unreasonable amount of talent, and specifically female talent, that can be found in Austin, TX on any given night. And that is what The Carper Family does; they are a working, local band, playing many nights a week at various Austin venues. Back When proves that this local band deserves more national, and international attention.

Purchase Back When Directly from The Carper Family