Alright, so first what you need to do is get right with the idea that The Defibulators come to country from the outside looking in. This doesn’t mean they’re not country, or that they’re not good. It’s country with a wily, sideways grin, with just the right dollop of humor and sarcasm to be fresh, edgy, and fun, without completely stimulating a pestilence of hipsters to dart towards them on their “fixie” bikes like moths to the light.

They’re not as ironic as let’s say a Johny Corndawg. There’s no “fucking underwater in a Chevy Beretta” on this album…though there is a semi full of go-go dancers…oh, and I forgot about the story of a mountain man making love to a bear. Okay, strike that point, but what I’m trying to get at here is that there’s more substance here than tongue and cheek, but there’s still tongue and cheek. Am I making any sense? 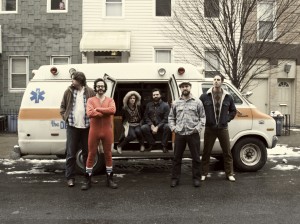 The Defibulators build from a classic country sound infused with the speakeasy style of female singer Erin Bru, add some hot Telecaster licks, a fiddle bed, and a little Western space into an Eastern seaboard-style of revitalized neo-traditional country. Officially the band hails from New York City (Everyone together: “NEW YORK CITY ?!?!”), but there’s no need to get a rope. Front man Bug Jennings is originally from Texas as he explained to Who I Met:

I grew up in Texas…I started listening to more and more country music after I moved to New York City. It was something I really wasn’t exposed to growing up in Texas. I was definitely exposed to top 40 country, Garth Brooks and stuff like that. Which is fine. But none of that stuff related to me…I started listening to old school country and all that resonated with me. I got obsessed with it and wanted to hear more and more of it and play it. I felt like I had been cheated- this was right under my feet, figuratively in the soil the whole time I was growing up. I wanted to reinterpret it from my perspective. 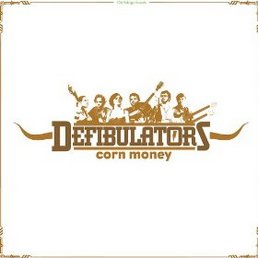 And a reinterpretation of classic country in their own vision as opposed to the attempt at an accurate portrayal is what allows The Defibulators to separate their steer-horned emblem from the herd through substance and creativity. It also helps that they approach the music with a level of respect and admiration instead of seizing on it as fodder for irony. It’s music that gets it, for people that get it.

Corn Money touches on many different moods. To the sultry, flapper-era throwback “Get What’s Coming” with Erin Bru at the point, to the feisty and fun “Corn Money” and “Ol’ Winchester,” to the refreshingly-serious “Your Hearty Laugh” and the danceable “The Gravy Shake”, The Defibulators keep their style a little hard to define beyond calling it classic, and country, and engaging. They keep you on your toes, and deliver an album that has spice as an attribute.

You know me, no matter how good the album, I usually find a scab to pick at, and with Corn Money I found the production approach to be a little stifling. Many albums attempt to evoke a classic feel with a recording and/or mastering technique, and I think this one resulted in less of a patina, and more of a fog. The harmony vocals, the lyrics, and some of the instrumental performances were so good I wanted to listen with a clear ear that instead felt a little frustrated and strained. I think the music needed to be allowed to breathe more. In fairness, this album was released 3 years ago and may have felt much different to a 2009 palate.

Either way, I like this album and this band, and you will too if you approach it with the right frame of mind. In short, if The Defibulators were playing loudly in my neighbors backyard at an inappropriate hour, I wouldn’t call the cops, I’d pull up a lawn chair.

Purchase Corn Money From The Defibulators