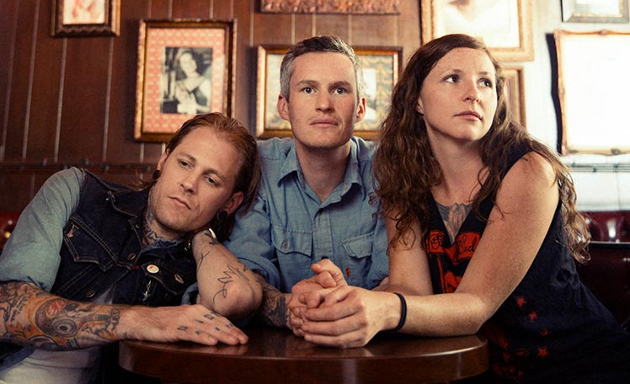 There are plenty of more proficient string band outfits out there on the open road, and punk-infused bluegrass bands that lay on the gas a lot harder. But few of them carry the longevity and legacy of The Devil Makes Three. It’s one of those bands you’ve never heard of, unless you have. A friend drags you to a show, and you’re floored how packed to the rafters it is with sweaty people singing along to most every song. Or you’re the friend doing the dragging.

Never a world beater when it came to wowing the industry with record sales, The Devil Makes Three are road dogs who know how to put on an infectious show that mixes dark punk-style themes with the powerful and eternal draw of original roots music. Made principally of primary singer and songwriter Pete Bernhard, guitar and banjo player Cooper McBean, and upright bass player, harmony singer, and hip swinger Lucia Turino, tireless touring has put them on or near the top of touring bills and festival posters from coast to coast, benefiting from being based originally in Santa Cruz, California, and originally hailing from the Vermont area, with flagpoles planted in Nashville in Austin as well, giving them enclaves and power bases across the country.

If you were to put your finger on the moment when The Devil Makes Three could have busted into the national consciousness, it’s when they originally signed with New West Records, wrangled Buddy Miller to produced their record I’m A Stranger Here, and released it in 2013 when Mumford & Sons, The Lumineers and others were making string band music all the rage from rock to pop. At this point the trio already had logged over a decade of service time, but the string band craze probably wasn’t their speed anyway. Staying grassroots and underground is part of what has kept this band cool. 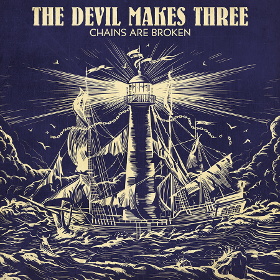 Aside from their covers record Redemption and Ruin released in 2016, The Devil Makes Three’s new album Chains Are Broken is their first record in six years. The work definitely symbolizes a shift in sound for the band, with drums and electric guitars prevalent throughout as opposed to the stripped-down, three-piece acoustic sound long-time fans have grown accustomed to. Producer Ted Hutt is known for working with roots bands who like to bring a little more moxy to their music like Flogging Molly, Chuck Ragan, Lucero, The Dropkick Murphys, and Old Crow Medicine Show.

Despite the undeniable instrumental shift to amplification, Chains Are Broken still feels very much like a Devil Makes Three record, surprisingly so. The minor chords, the dark themes, and the punk roots attitude is still what’s most prevalent. You almost don’t notice they’ve basically morphed into a rock band. The songwriting still keeps everything familiar, as do the three-part harmonies, and the potency of the whole package.

What makes this band unique is their willingness to say something deep in their songs and make you think, but also not be too proud to employ melodic sensibilities and infectious grooves to make that message go down smooth. The Devil Makes Three write and deliver their songs to do the most damage live. The song “Deep Down” is about the deception lying beneath the surface of many upstanding citizens—a pretty heavy subject. But it ends in a call-and-answer-style groove that is perfect for ensnaring live crowds.

Despite the moody moments, Chains Are Broken has some sweeter sounds, almost veering into 60’s classic jangle pop in songs like “Can’t Stop” and “Castles” that don’t cut against the grain of their established Gothic styling, but compliment it. If there’s a underlying theme to Chains Are Broken, it’s encapsulated in the title. But instead of referring to the slavitude of modernity or cultural norms as you might suspect, it’s more of a post punk narrative about how a level of sobriety and equilibrium is what bestows a newfound freedom.

Though Chains Are Broken hypothetically symbolizes The Devil Makes Three straying from their string band roots, it just doesn’t feel like that. Though you hope they haven’t completely abandoned their acoustic nature in the long term, they’ve also earned their right to stretch their legs now some 16 years deep in their career. Chains Are Broken never hits a super high note, but it’s consistent and enjoyable throughout. It’s an album you push play on and let roll, and it will feed plenty of new material into their live show for years to come. It’s an “evolution” in the right way.

Purchase Chains Are Broken from The Devil Makes Three

Purchase Chains Are Broken from Amazon